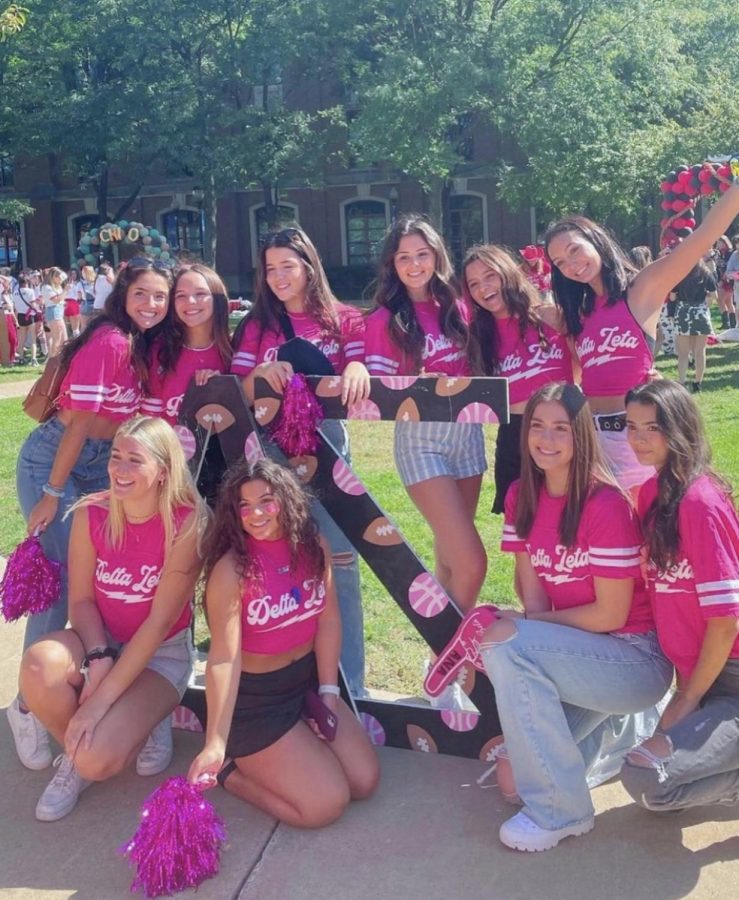 Courtesy of @DePaulPanhel on IG

After a year of Zoom classes and virtual campus activities, DePaul Panhellenic held in-person Fall Formal Recruitment this past week.

As with every organization, business and industry, there has been a tremendous amount of adaptation in the Panhellenic community to sustain Greek life participation, primarily during the past academic year.

One-hundred-seventy women signed up to participate in formal recruitment, according to Kacie Koenig, the vice president of recruitment counselors on the Panhellenic Executive Board and a four-year member of Phi Mu.

Formal Recruitment is a five-day process where potential new members talk to and get to know active members from different sororities. At the end of Recruitment, undergraduate women join a sorority.

“Greek life has been a great way to make friends with my own chapter, other chapters, and even outside of Greek life,” said Alyssa Byers, a four-year member of Alpha Omicron Pi. “It’s been a really easy way to get involved in the community, as well as give back to others through philanthropy events.”

DePaul’s fraternity and sorority life is a fairly small community, making it easy for students to find closer communities in a large university setting.

Each of the five days offers an opportunity to talk about the sorority’s sisterhood, philanthropy and chapter.

On the fourth day, called Preference Tea, potential new members narrow down their top two sororities while active members start deciding who they would like to welcome into their sisterhood.

Bid Day concludes the five-day event where each of the Panhellenic sororities welcomes their new members through fun celebrations and activities.

“It was so exciting to be back in person,” said Megan Davies, who joined Chi Omega during virtual recruitment in the fall of 2020. “Recruitment was such a fun time, especially since it was my first time recruiting.”

This year’s recruitment may have been the first for many. Still, some sorority members who saw the changes in recruiting new members have been active in the Panhellenic community from freshman to senior year.

“As someone who has been a freshman being recruited, a sophomore doing the recruiting, and a junior and senior who operated on the Panhellenic side,” Koenig said. “I have genuinely never experienced a more enthusiastic group of students carrying out the recruitment process.”

Despite the joyful excitement and cultivation of bonds brought on by recruitment, coming back on campus to recruit new members certainly raises concerns about the safety of such events regarding the spread of Covid-19.

“Even though recruitment was largely in person, Panhellenic offered a parallel virtual version of in-person recruitment which operated completely over Zoom for those who did not comply with DePaul University’s vaccination mandate,” Koenig said.

Not only was there an option to rush virtually for those who could not attend in-person recruitment, but steps were taken to keep those rushing on DePaul’s campus safe as well.

“Every individual present during recruitment was required to be masked, which was enforced by Panhellenic and DePaul University Staff,” Koenig said. “Panhellenic provided masks and hand sanitizers to all the new members participating in recruitment.”

“It was definitely different from the previous two years,” Koenig said. “Given that the medium of communication jumped from in-person, face-to-face contact, to a completely digital form.”

Panhellenic recruitment was conducted entirely on Zoom both Autumn and Winter Quarter last year, which certainly had its obstacles, as did virtual classes and other events.

“Sometimes it could be challenging with technical difficulties and such,” Byers said. “But I think both the recruiters and the potential new members did a great job adapting under the circumstances.”

Even with a lack of in-person gatherings for the Panhellenic community last year, sororities were still successful in recruiting new sisters.

“As someone who joined a sorority during virtual recruiting, I had a great recruitment experience,” Davies said.

“I am so grateful we were able to make it happen,” Koenig said.

Going forward with the year, Covid-19 continues to be a significant factor in how on-campus organizations and clubs operate.

“As the year goes on, I’m really looking forward to experiencing in-person events and building on my sorority experience with new memories,” Davies said.