In crisis-struck Lebanon, school year is gripped by chaos 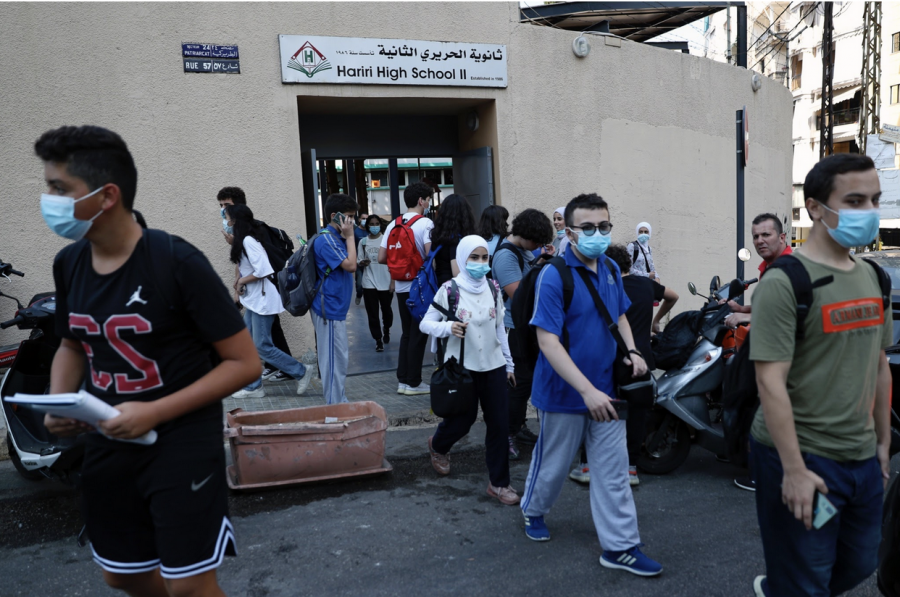 BEIRUT (AP) — This fall, the academic year in Lebanon is gripped by the same chaos that has overwhelmed everything else in the country in its financial and economic meltdown.

Thousands of teachers are on strike, demanding salary adjustments to cope with hyperinflation and the currency’s free-fall. A month’s pay is now barely enough to fill a vehicle’s gas tank twice.

With severe fuel shortages, it is not even certain they can fill up. School buses are no longer a given, and heating for classes in the cold winter months is far from guaranteed.

The start of school has been postponed several times as the cash-strapped government negotiates with the teachers’ union for an adjustment package estimated at about $500 million.

As a result, while some private schools have begun classes, most of Lebanon’s 1.2 million students still don’t know when they will go back to school. Meanwhile, teachers have been quitting in droves, looking for better opportunities abroad.

Many fear not just a missed academic year, but a lost generation in a country that prided itself in competing globally with the number of scientists and engineers it graduated.

Schools have already been disrupted the past two years by a series of events — protests starting in late 2019 that interrupted the academic year, the switch to largely online classes in 2020 because of the pandemic, and rising poverty. Some 400,000 children were not in school in 2020, according to UNICEF.

Struggling parents have moved their children from private schools, usually touted as first-class education, to public schools. More than 50,000 students transferred last year, and the number is likely much higher this year, said Alaa Hmaid, of Save the Children.

This pressures the under-resourced public sector, likely at the expense of enrollment of Syrian and Palestinian refugees, who rely on Lebanon’s public system.

“We don’t want to create a potential gap in the future where a full generation would be without education,” Hmaid said, calling for more resources for education.

According to U.N. figures, 55% of Lebanon’s population now lives in poverty, compared to 28% in 2018, effectively wiping out the once large middle class. Salaries plummeted as the currency lost 90% of its value against the dollar.

No fewer than 15% of Lebanon’s 53,000 private school teachers have left the country, creating a large shortage, said Rodolph Abboud, the head of the Teachers Union.

Amid the hardships, parents are resolutely searching for ways to keep their children in schools.

Lara Nassar, 38, has been managing her family’s slow descent into poverty.

She was once an Arabic kindergarten teacher, her husband ran a thriving food business, and their three children went to private school. But for the past three years, to cut costs, she was forced to move her two boys, now 18 and 15, out of a top-end private school, first to a cheaper school, then to a public school.

It was a tough decision, but she wanted to ensure she could afford to keep her youngest, now in 5th grade, in private school until the end of her primary education.

“I am keeping her in the picture. She knows that in two years, I will have to move her to a public school. We can’t continue like that,” Nassar said.

Nassar was laid off last year because of the reduction in face-to-face classes during the pandemic. Because of the financial crisis, her husband had to lay off his staff and scale back his business dramatically. Instead of preparing home-cooked meals, he runs a small, basic grocery with no fuel and unreliable refrigeration.

Nassar is now his only employee. Amid the teachers’ strikes, Nassar’s kindergarten offered her her job back. But she declined so she could help her husband.

“We are living drip by drip,” she said.

She was able to secure financial assistance from her daughter’s school — a 50% reduction in the fees. A week before classes start, she is still searching for second-hand books at local charities.

She broke down in tears talking about her sons’ love of basketball. They used to save their allowance to buy new shoes every year. Now she can barely get them shoes for school — their cost is worth nearly a month’s salary at the national minimum wage.

“See what kind of things we have to worry about?” she said.

Naima Sadaka said she watched the economic crisis unfold on the Facebook page she set up three years ago to help figure out which schools to enroll her kids in, after she returned from Saudi Arabia with her family.

Over the last few months, membership in the “Schools in Lebanon” page grew by 50% to 12,000. The queries and comments changed from parents seeking recommendations for private schools to posts advertising second-hand books or arranging car-pools amid shortages of school buses.

Many reached out to Sadaka in private messages asking for second-hand school uniforms, too embarrassed to post on the page, Sadaka said.

A parent should be worried about their kids’ development and skill set, but “here, we worry about just getting them to school,” said Sadaka, who lives in the southern city of Sidon.

There is almost no public transportation, school bus fees have tripled and government officials are no help; so Sadaka had to figure out rides to school for her three kids on her own.

For her 9- and 10-year-olds, she arranged rides with a neighbor who works near the school they attend, which is funded by an Islamic charity. For her daughter, a first grader in a public school, Sadaka accepted a job there teaching French, which basically pays for gas. Her husband drops her and their daughter off there every morning.

Once a teacher in Saudi Arabia, Sadaka said she regrets coming back. “It is as if I went back 15 years,” accepting a meager salary, she said.

After Lebanon’s banks and hospitals, once a source of national pride and cash, were crippled by the economic crisis, she said, “if they don’t save the education sector, then we will have nothing.”

Maya, a mother of two, took no chances. She decided to leave in August after fuel shortages became so severe and no date for a return to school was set.

She and her husband left to Cyprus, where she enrolled her 6- and 8-six-year-old kids in an English language school. The island’s only French school has been overwhelmed by recently arriving Lebanese students. Speaking by phone from Cyprus, she asked that her last name not be used to maintain her privacy as she adjusts in the new community,

At her kids’ private school in Lebanon, at least 50 teachers and half of the students in her daughter’s class have left, she said.

“Who will teach our kids? What friends will they have left? This is what I worried about. It is not the same standard anymore.”