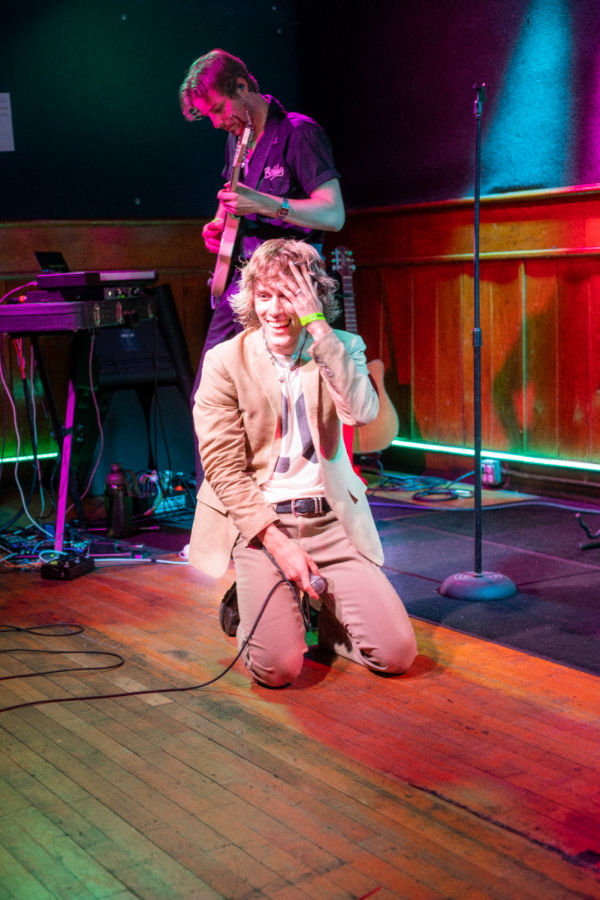 Zach Taylor, aka Dreamer Boy, at a Schubas Tavern show on Tuesday, Sept. 28.

Zach Taylor, known as Dreamer Boy, has been making waves in the indie scene over the past few years, opening for Omar Apollo, Clairo and Still Woozy. With Nashville roots, Dreamer Boy floats the line between indie, pop and country, carving out a new space with a genre-defining spin that music has been missing.

Influences from all genres can be identified in his music, which is becoming a growing trend in new age artists who have grown up alongside technology and music streaming. From guitar-based hits to R&B bass lines, heavy synthesizer use to country twangs, Taylor’s music has been labeled “irresistible cowboy pop” by Ones To Watch, a Live Nation blog showcasing new talent on the rise.

Following his debut project “Love, Nostalgia,” Dreamer Boy is currently headlining a tour with his sophomore album “All The Ways We Are Together.” The project not only added to his genre-bending hits, but elevated them with a hazy, sentimental collection of songs about love and meaningful relationships. Its release date, Earth Day, was carefully chosen by Taylor, who grew up everywhere from Washington to Texas to Alabama.

The release on Earth Day was tied into various causes integral to who Taylor is as an artist and as a human. Streams from the album helped to plant 1,500 trees in partnership with One Tree Planted. He is also partnered with the local organization Root Nashville which aims to maintain and preserve the urban tree canopy in the city’s historically neglected neighborhoods. His active voice in the environment is evidence of a new generation that does more than just make music, but uses it to provoke change. His involvement in activism rightfully draws an audience with similar values, both musically and morally.

Taylor spoke on the album, and how it is not only meant to reflect on the ways we relate to one another, but also the effects we have on the world. The songs are about the different forms of love we have; for ourselves, our friends, and the environment around us.

Dreamer Boy headlined Schubas Tavern on Tuesday, Sept. 28. At only 23 years old, Taylor pulls a college-age crowd that shows up for him hours prior to show time. His fanbase does not just include college kids however, with high schoolers who drove in from Lafayette to 20-somethings and up. Identifiably indie, the crowd came out in numbers; rocking baggy jeans, thrifted tees, button-ups and sweater vests, shag haircuts. Pre-show cigarettes outside with talks of Riot Fest and Pitchfork were common.

Prior to entering, vaccination cards are verified at the door, and masks are to remain on while inside. The pandemic requirements did anything but hinder the energy in the venue. Those who have been to Schubas before would know of the side entrance that allows the artist to walk through the crowd to get on stage. From his opening track and walk on, Dreamer Boy had the audience captivated and ready to move.

With such a small venue, fan interaction was unavoidable and evidently fueled Taylor’s energy. He continued to bounce on and off stage, forming mosh pits and ending up laying on the floor. In the middle of the set, Taylor found himself sitting on the edge of the stage to slow it down, captivating the audience around him. He was beautifully shocked to find the girl in the front row had flown up from Miami for one night to see him.

Throughout the setlist, his stage presence continued to prove to be a testament to his bright future. Mick Jagger-esque dancing that kept him bouncing off the walls proved his artistry and ability to move an audience, some of whom came as dates and left as fans. Constantly grateful for the ability to play live once again, Taylor made it known the collective struggle young people have endured the past few years, and the strength it took to get to where we are today. Dreamer Boy is a young talent bound to rise up among Chicago venues as he continues to tour with new music. His skillset moves far beyond musicality; engaging with a crowd and keeping people entertained for an entire set, while still having the energy to meet and talk to those fans afterwards. Dreamer Boy is an artist to watch for 2021 and the years to come.