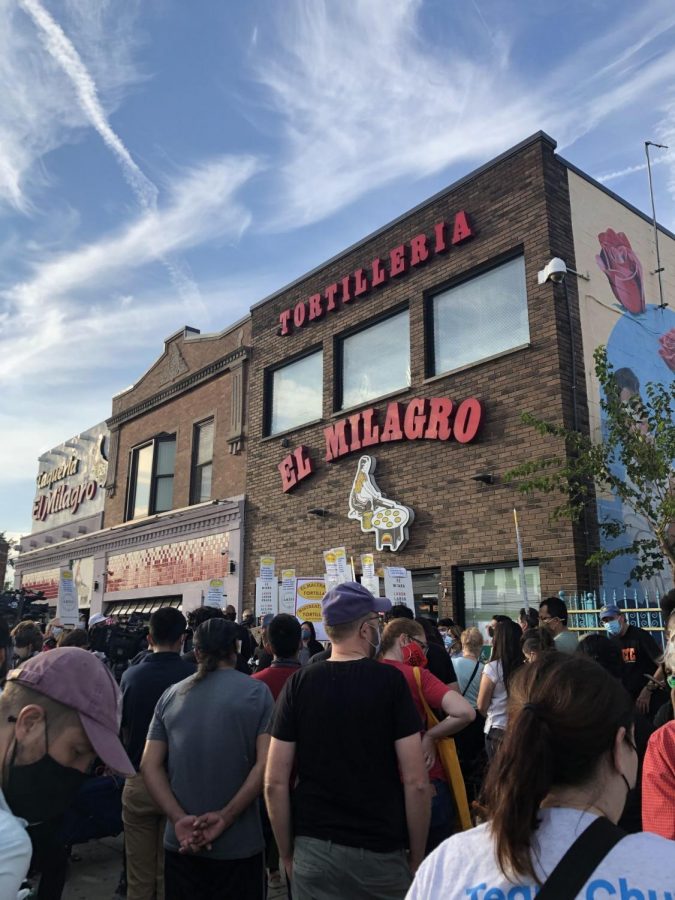 El Milagro workers hosted a rally with the workers’ rights organization Arise Chicago on Sept. 30, a day after they asked for a meeting to discuss worker demands on safer working conditions.

Arise Chicago has filed an unfair labor charge against El Milagro at the National Labors Relation Board. The company is avoiding negotiations with their workers

“I have been working for El Milagro for 13 years,” Alfredo Martinez, a El Milagro worker, said. “The problems we face are awful. Workers are being overworked and not getting a decent wage. We are suffering.”

As a single father of two girls with autism, Martinez wants to be able to work in a safe environment.

“The three of us live alone so I am afraid, it is logical because I have to support and take care of  them but I am not going to stay with my arms crossed my whole life,” Martinez said. “Now is the time to speak.”

El Milagro workers were surrounded by community members and elected officials in support of their demands.

Daisy Navar, a Logan Square resident, has been buying El Milagro tortillas for as long as she can remember.

“I’m a consumer, and I think it’s important for consumers to be aware of the working conditions within what we’re buying,” said Navar.

El Milagro products, especially their tortillas, are in high demand. This demand is causing shortages of the tortillas. In response, supermarkets placed a limit on how many tortilla packs can be bought by customers.

At first, many speculated that Amazon was buying large amounts of the product to be sold online. In reality, the shortages were caused by unsafe working conditions that were causing employees to demand change.

“We will stand up with them because they are part of the community,” Navar said. “We want them to live well and [live] long lives. We want to build wealth in our community; we can’t build it with these working conditions.”

State Senator Celina Villanueva, representing the 11th district, said the work injustices at El Milagro are close to her because she not only represents La Villita but is also a resident.

“I’m the daughter of working class parents and when I see injustices like this it’s one of those things that gets me so mad, because honestly these are our parents and cousins, these are our community members being treated like this,” said Villanueva.

In April 2020, El Milagro had to stop production after an employee passed away and others were sick due to Covid-19. According to the Chicago Tribune, this caused production to fall by 75 percent.

After the outbreaks of Covid-19, working conditions got worse. Out of fear of losing their jobs, workers didn’t show up to the rally.

“I understand the fear because that’s the paycheck that helps pay the bills and that keeps a roof over their head, but there is really no amount of money that compares to the dignity and respect of a worker,” Villanueva said.

Workers continue to return to work, but some say they have been threatened to lose their jobs if they continue organizing with Arise Chicago. Up until now, workers have not said they will be going on strike.

“The bosses are intimidating workers causing them to feel fear, that is why they do not participate in the rally,” Martinez said.

Villanueva expresses that as long as the injustices in the workplace don’t change, they will not stop from supporting workers.

“I think what’s devastating is that it’s Latino owners of a Latino business that is treating Mexican and Latino workers like this,” said Villanueva. “This is not how we should be treating each other. We are a community that deserves respect.”

Arise Chicago is asking consumers of El Milagro products to call the president of El Milagro, Raulinda Sierra, and request she meet with the workers’ committee.

“We want our bosses to sit down with us and try to fix the problems we face, because in reality it is a benefit for them,” Martinez said. “They can fire us but the problems will continue if they don’t fix them.”