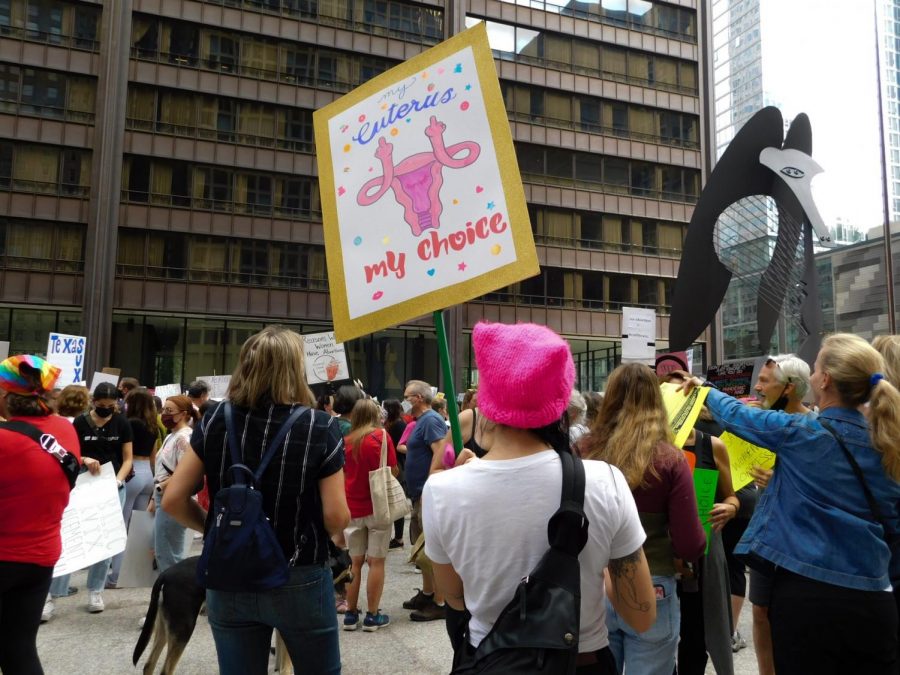 Supporters of all ages and genders gathered to protest against Texas’s abortion ban Sat. Oct. 2.

The protesters gathered at the Daley Center before marching through the Loop to protest against Texas’s Senate Bill 8, which outlaws abortions after six weeks. Opponents to the law argue the month and a half window is too narrow, supporters claim the fetus has a heartbeat after six weeks and therefore immoral to abort it.

Texas Gov. Greg Abbott defended the law saying it is not an outright ban.

This law is constitutional under Roe v. Wade. However, due to Texas lawmakers finding a loophole that allows the law to apply to private citizens, not institutions.

“I think we’re in a really terrifying spot, because we’re looking at 50 years of legal precedent that might be scrapped next summer by the Supreme Court,” Greep said. “That really motivated a lot of people.”

Protestors showed up in opposition of abortion bans but also in support of Texas citizens affected by the law.

Protesters across generations attended the event, highlighting the inter-generational fight for abortion rights through time.

Roe vs. Wade was ruled in the early ‘70s as Generation X was growing up.

Sandstrum highlighted the solidarity between generations as they continue to fight for people’s autonomy.

“If you pick the younger people in this crowd,” Sandstrum said. “I think they probably can’t believe that they have to be here, because they grew up thinking that abortion was legal, knowing that it was legal, having more rights than any than their mothers did, and their grandmothers did. And they probably can’t believe that this is such an assault on their autonomy. I’m grateful for the younger generation because the assault on women is endless.”

Several political organizations also attended the rally, including the Party for Socialism and Liberation (PSL), which advocates for abortion is healthcare.

“We think it’s really important for us to be fighting back against this right wing assault,” PSL member Aviva Levine said. “We really believe that abortion should be legal once and for all across our country.”

“A lot of these providers of abortion care, also providers of gender affirming, oftentimes, only providers in an area,” she added. “So anytime they’re coming out there, they’re pulling out their resources. That’s so many people, not just women, not just trans men, not just anyone who has access to that healthcare.”

The support from other organizations helped create the rally’s large attendance numbers, according to the Chicago Sun-Times.

“A lot of progressive organizations are working together in coalition to really lift this up because reproductive justice and reproductive health matters to a lot of folks,” Greep said. “This has been a fantastic effort.”

Illinois has no restrictive bans on abortion, allowing for people to recieve an abortion up until 24 weeks, and after only for medical emergency.

The fight for reproductive justice and health continues after the march.