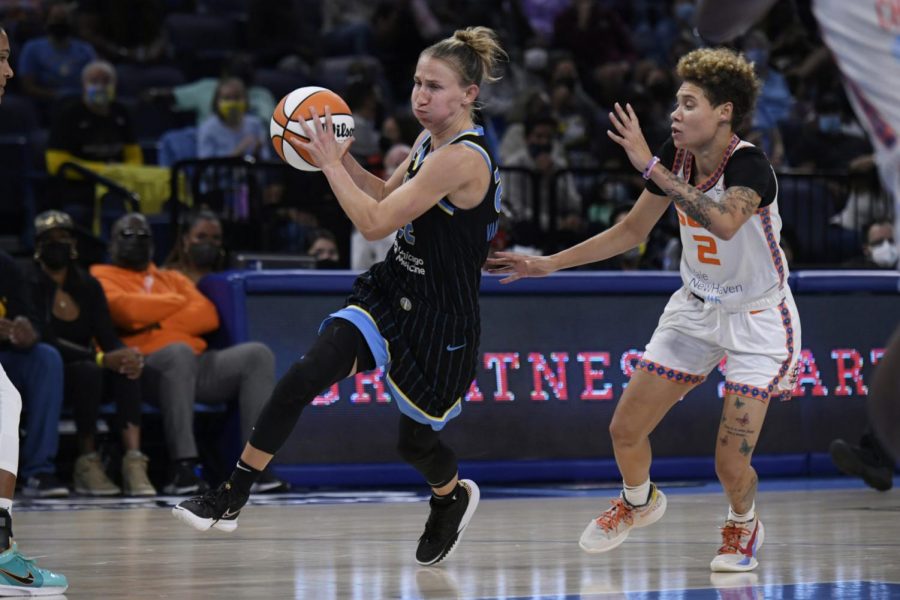 The Chicago Sky had been waiting for this moment for seven years — a chance to secure a spot in the WNBA Finals for only the second time in franchise history.

On Wednesday, the Sky, in front of their home fans at Wintrust Arena, defeated the Connecticut Sun 79-69 to advance to the championship series. The Sky will face either the Las Vegas Aces or the Phoenix Mercury in the next round.

Seven years ago when the Sky clinched their first berth to the WNBA finals, they did it on the road at Bankers Life Fieldhouse against the Indiana Fever. This time, however, the Sky got the opportunity to book a place in the finals at home.

The Sky did not waste any time in getting off to a strong start, scoring 10 of the first 12 points in the game. Point guard Courtney Vandersloot knocked down two 3-pointers in the opening two minutes, which would set the tone for the rest of the game.

Chicago’s defense would disrupt the Sun’s offense all night long, and it began with a strong performance in the first quarter. The Sky held the Sun to 38.1 percent shooting from the field and forced 13 turnovers. Leading the effort for the Sky was star forward Candace Parker, who finished the game with two steals and two blocks.

At times, Parker also played as point forward, grabbing rebounds and then finding her teammates for open baskets — including one no-look assist in the first half. She finished the game with 17 points, nine rebounds and seven assists.

The Suns would find their way back into the game in the opening frame after the Sky took a double-digit lead. But the closest the visitors would get is within three points in the second quarter before Chicago would begin to pull away.

The Sky would close the first half on a 16-6 run to take a 54-41 lead going into the break. Guard Kahleah Copper scored seven of the team’s final 13 points. She ended up finishing the game with 18 points and six rebounds.

A 3-point play from Copper and then back-to-back 3-pointers from Vandersloot and Parker gave the Sky their biggest lead of the night, 65-47, in the third quarter. Chicago would struggle offensively in the final five minutes of the quarter, which allowed the Sun to pull a little closer. The Sky held a 65-58 advantage going into the fourth quarter.

Sky forward Azura Stevens would break Chicago’s scoreless streak a couple of minutes into the fourth quarter. Chicago would force multiple shot-clock violations in the quarter.

The Sun struggled to generate any offense in the final 10 minutes, only scoring 11 points in the final quarter and having to settle for tough shots.

Parker’s final basket came with 3:03 to play in the game, giving the Sky a 77-62 lead. The fans gave Parker and the rest of the starters a standing ovation as they came off the floor for the final time.

DePaul alum Allie Quigley finished the game with six points on 1-of-6 shooting from the field. Vandersloot led the way for the Sky with 19 points, while Jonquel Jones scored a game-high 25 points.

The Sky will play Game 1 of the WNBA Finals on the road against either Las Vegas or Phoenix on Sunday.