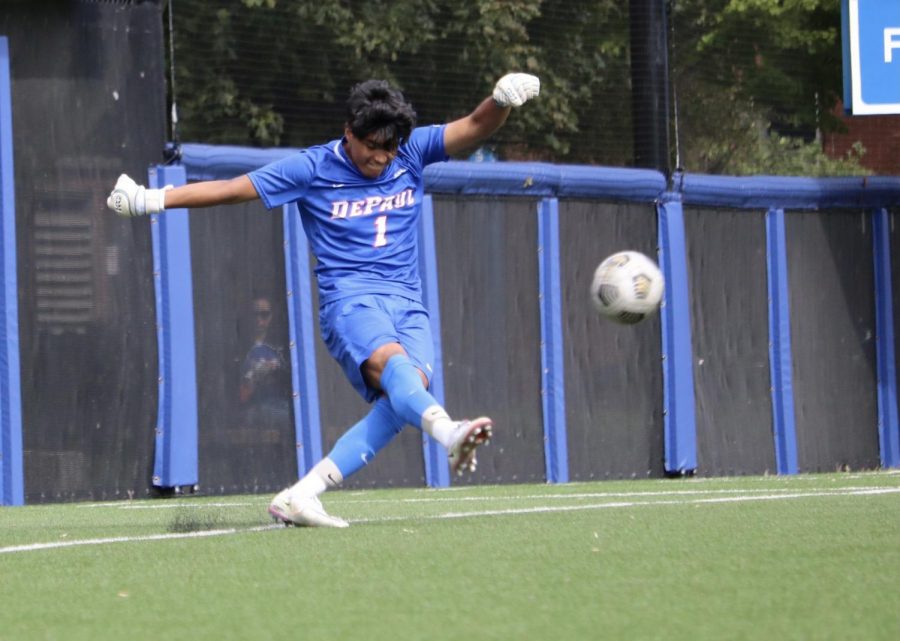 In a midweek game at home, DePaul men’s soccer claimed a 1-0 victory over Creighton University thanks to a second-half goal by sophomore midfielder Jacob Huth.

After losing to Georgetown 3-1 on Sunday, the Blue Demons were on a two-game losing streak entering the match. This win over Creighton was huge for the Blue Demons, as the team improved their record to 6-4-0 overall and 4-2 at home. They are currently 4th in the Big East.

Despite the gloomy weather, both teams fought hard at Wish Field. The first half presented plenty of scoring opportunities for each side, but neither was able to take advantage. As a result, both teams’ defense played a huge factor in deciding the game. However, in the second half, Huth broke the deadlock and scored a goal down the stretch off an assist from midfielder Julian Saldana. It was Huth’s second goal of the season.

“It feels good, definitely better than last year which is what I was aiming for,” Huth said about his game-winning goal. “I only scored one goal last year, but now I am aiming for more. I’ll take any opportunity I can get.”

“I thought it was one of our best performances of the year, we were really solid defensively from start to finish,” DePaul head coach Mark Plotkin said. “We talked a lot about the defensive side of things because that will always give you a chance to win the game and knowing to be patient to wait for your one moment. Overall, I thought our guys were fantastic defensively and the subs gave us juice as well.”

“Creighton has beaten the No. 1 team in the country and has arguably the No. 1 schedule so far,” he said. “So their record does not tell how good they are. They are outstanding.”

The game was a hard-fought and emotional affair from start to finish. Overall it was a very physical game that consisted of 33 total fouls. The Blue Demons had 11 and Creighton had 22.

“Creighton is a really strong team and I think we came out and showed them we were better,” Blue Demons senior captain Matthew Brickman said. “[We were] more dominant and I think we set a message to the rest of the Big East, and this is a standard we will live up to this weekend as well.”

Even though Huth scored the winning goal, Brickman commented on other key plays that went unnoticed.

“Jake Fuderer shut down Creighton’s best player all game, Diego Guiterrez and overall our offense was very clinical,” he said.

Following this game, Plotkin is looking forward to the Blue Demons’ next matchup against Providence University.

“We are going to continue to progress,” Plotkin said. “We tell our guys each game we want to be a little bit better and we want to continue to develop. Other teams are going to pose different challenges against us. Providence is a really good team that have scored a ton of goals this season. I think if we are dialed in on the defensive side of things, as well as offensive, we will be fine.”

The Blue Demons travel to Rhode Island to face off against Providence next Saturday, who are 6-1-2 overall and 2-0-1 in the Big East.