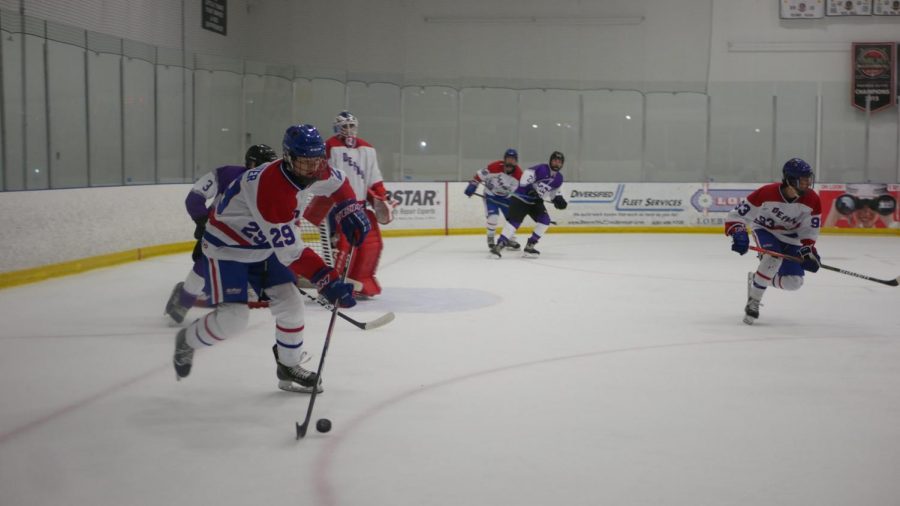 DePaul club hockey faced off against St. Thomas at home last weekend, but fell 2-1 in back-to-back games on Friday and Saturday.

Friday’s game started off with a classic smashmouth affair, with both teams garnering penalties early in the first period. DePaul got the worse end of the stick though, when a hit by defender Michael Helf led to a five-minute major and Helf’s ejection from the game.

Although St. Thomas retaliated, leading to some 4-on-4 play, the visitors eventually got on the strong side again, and found the back of the net at the end of the five-minute penalty for the lone goal of the first period.

DePaul and St. Thomas spent a lot of time with a player in the box throughout the early portions of the game, taking some rhythm out of the game. The referees took control of the game with strict calls early on.

“We need to stay away from the box,” DePaul goaltender AJ Grzbek said. “I think we’re best 5-on-5. We just gotta keep it even and get pucks to the net.”

The game settled down in the second period. Both teams were able to run their set offense and send the puck around trying to find quality shots. DePaul demonstrated some great movement in the middle of the ice and on transition from defense to offense.

Grzbek faced a good amount of shots, but was able to corral just about every one. Faced with a lot of scrums in front of the net, he stayed composed and stopped chance after chance before they came to light.

The third period was hotly contested from the start. Momentum started to shift towards DePaul at the end of the second, and they carried it right into the final third. Forward Danny Mannarino scored for the Blue Demons a minute into the third to tie things at 1-1.

It may have seemed like a winning opportunity for DePaul, but plans were thwarted less than a minute later when St. Thomas scored just a few passes after the faceoff. The go-ahead goal was so sudden and the teams went back to the tug-of-war that had preceded the period.

DePaul saw a good amount of chances, but were held in check by St. Thomas. The visitors got more shots over the last 10 minutes, and even hit the bar at one point. Brzek stayed focused on goal, but the Blue Demons were forced into a corner. The game ended with a score of 2-1.

The game was the first of the weekend and the first home game for DePaul since before the Covid-19 pandemic. Fans returned to Johnny’s IceHouse West, boosting the team just a little bit.

“My parents and my brother were in the stands, so it was awesome playing in front of them, putting on a little show for them, [I was] just happy,” Grzbek said.

The team returned to the ice to take on St. Thomas again the next day but fell 2-1 in a tight game that was scoreless until the final five minutes.

The game was chippy from the very beginning, with both teams flying on the ice from the first puck drop. Both teams had power plays in the first period, with St. Thomas going on the man-advantage first. However, DePaul was able to kill off the penalty, while St. Thomas did the same to DePaul a little while later.

The second period was much the same, with the Blue Demons spending a chunk of time in the penalty box. DePaul started off the period on the powerplay but committed their own penalty, and both teams were down to four players on the ice each.

However, the Blue Demons got sent to the box again only seconds later, which put the team at a 4-on-3 disadvantage and forced the penalty kill to work overtime. And they did, killing off the 4-on-3, as well as another penalty they took later in the period.

“The penalty kill has been one of our strongest, they have bailed us out a lot,” head coach Dan Wood said. “We’ve taken too many penalties in my opinion.”

The third period was the most action-packed. It began with a DePaul penalty, but nothing amounted from it, and the score remained at zero.

However, with a little under five minutes left in the game, St. Thomas was able to get the puck past DePaul goaltender Asher Motew and landed on the board first.

DePaul did not let that deter them and bounced back minutes later with a goal from Helf, who took the puck all the way from his end of the ice and past multiple St. Thomas defenders before putting it into the back of the net

The tie did not last for long though, as St. Thomas regained the lead seconds after Helf’s goal with only a few minutes left in the game. The Blue Demons were not able to recover and even took a penalty defending a St. Thomas attack, which left them shorthanded for the rest of the game.

While the penalty kill held up like it had all game, and the Blue Demons even had a shorthanded breakaway in St. Thomas’ zone, they were not able to bounce back before time ran out.

Despite the loss, the penalty kill proved that it can hold up to a strong offensive opponent like St. Thomas, especially since St. Thomas had many chances on the powerplay.

Along with the penalty kill, Motew had a strong game. He stood tall in goal, stopping many of the hard shots that St. Thomas threw his way.

“I thought we improved a lot from the last game, way better than yesterday,” Helf said. “Still got a lot of work, but we’ll get there.”

The Blue Demons travel to play Marian University next Friday before returning home to take on Marian again on Saturday.