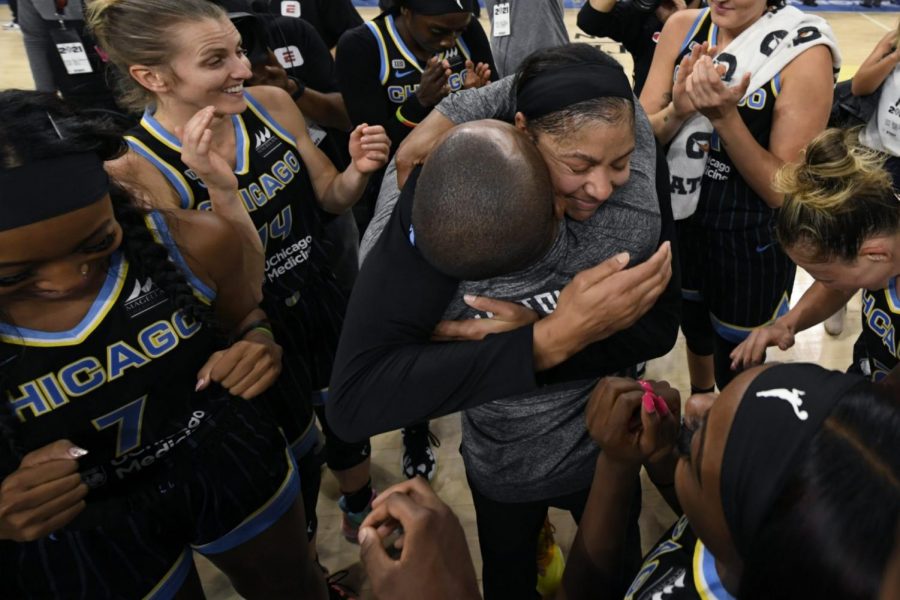 The Chicago Sky have become accustomed to making the WNBA playoffs since they hired head coach/general manager James Wade in 2018. Prior to the 2021 season, the Sky have come just short of the finals, including falling to the Las Vegas Aces on a buzzer beater in the 2019 second round.

Even with an already talented roster, the Sky felt like they were still one piece away from really reaching their potential. That’s why the organization — including its players — decided to pursue forward Candace Parker in free agency last offseason.

Parker, who grew up in Naperville, Illinois, received a creative pitch from some of Chicago’s players as to why she should come home. One day in January, Parker got back to her Los Angeles home with some of her favorite Chicago food waiting for her — food from Portillos, Garrett Popcorn and deep-dish pizza.

“I just wanted to remind her what she could [have] on a daily basis,” Sky guard Courtney Vandersloot said following Chicago’s 79-69 win over Connecticut on Wednesday.

The pitch from the Sky eventually worked, and Parker ended up signing with her hometown team in one of the most signficant free agent acquisitions in WNBA history.

“It’s just kind of like [a] full circle moment to look up in the stands and just see all the people that [I] have started playing basketball in front of,” Parker said after Chicago clinched a trip to the WNBA Finals on Wednesday. “This is a special group. I think the way you face adversity, it’s built our character and it’s revealed it.”

“I honestly looked at this team, and after playing against them so many years, I wanted to be part of it. “I think there’s pressure in every situation. I don’t look at it that way, I look at it as an opportunity.”

Parker has proven to be the missing piece for this Sky team. In the semifinals-clinching win over the Sun on Wednesday, Parker finished the game with 17 points, nine rebounds, seven assists, two steals and two blocks.

“We knew we had something special here in Chicago that we had built over time,” Vandersloot said. “We were missing one piece, and it was Candace Parker.”

For years, the Sky were building for this particular moment with solid draft picks and adding in free agency with impactful players — but the addition of Parker is what took this team to the next level.

“I think this is the Chicago Sky we expected in the bubble [last year],” Connecticut coach Curt Miller said. “They’re healthy right now. This is what we’ve expected for two years from them. This, player-for-player, team is just dynamic offensively. And there’s a real confidence with them right now. What’s really impressive is how hard they’re playing. And [coach] James [Wade] is pushing all the right buttons.”

The path to the 2021 finals wasn’t always clear for the Sky. Chicago finished the regular season with a 16-16 record, having to play in two single-elimination playoff games in order to reach the semifinals.

The team faced adversity early on in the season when Parker had to miss nearly a month with an ankle injury; guard Allie Quigley missed time with a hamstring injury; and forward Stefanie Dolson missed multiple games playing in the three-on-three tournament in the Olympics.

“It took a lot of togetherness, a lot of belief and a lot of blind faith,” Wade said. “What we have as an organization and what we have as people, sometimes you don’t see it but you know what’s there and you just have to keep putting one foot in front of the other. And so it took some good leadership on our veterans part as well. … So we have to work for it every day and so that’s what they do, and everybody challenges each other to be their better selves and that’s the kind of atmosphere and culture we have created here.”

Following Chicago’s win on Wednesday, Parker also talked about the culture that Wade and his staff have been able to create, which is one of the main reasons why she decided to switch from the Los Angeles Sparks to the Sky.

The addition of Parker doesn’t only make the Sky stronger on the court but it also gives them a stronger appeal in the Chicago market. The game on Wednesday saw Chicago athletes and politicians attend, including Scottie Pippen, Rev. Jesse Jackson and Mayor Lori Lightfoot.

The Sky defeated the Phoenix Mercury in Game 1 of the WNBA Finals on Sunday, 91-77. Parker finished the game with 16 points, eight rebounds and three assists, while three other Chicago players also finished in double figures.

“We’ve had rocky seasons,” Vandersloot said. “We’ve had people who wanted to be out of Chicago. A bad reputation, hard to get free agents. I’m out there texting everybody, trying to get people to come here. It’s been a lot. But when we finally got that core group players that wanted to be here, we had something special. So when I was out there and I looked up at that sign that said ‘finals bound,’ it hit me. I looked into the crowd and I couldn’t believe it. I didn’t see an empty seat in that lower bowl. It was very heartwarming.”