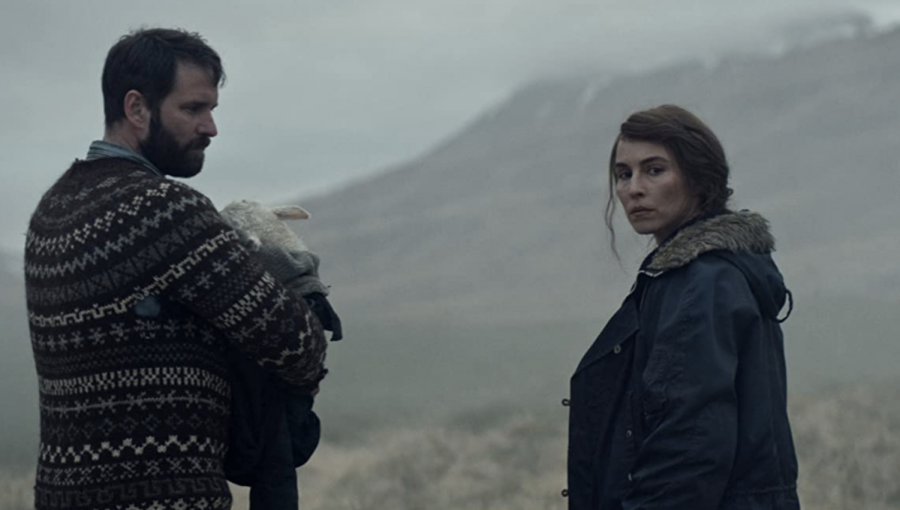 One of the last few distributors with a strong sense of identity, A24 has cemented its reputation in the film industry as the go-to studio for disorienting, expertly-crafted dramas and horror films that walk genre lines and leave audiences scratching their heads. Their latest film, “Lamb,” is no exception — walking the line between surrealist horror, romantic drama and slice-of-life. The Icelandic tale of nature versus nurture is a mesmerizing modern fable that, though sometimes tedious, is anchored by sharp direction and dreamlike cinematography.

“Lamb” follows Icelandic couple Maria (Noomi Rapace) and Ingvar (Hilmir Snær Guðnason), who live a quiet, secluded life in the mountains tending to their flock of sheep. Though they are content with their peaceful lifestyle, they yearn for a child to fill the void left by past miscarriages, and they get their wish in an unorthodox manner — the titular lamb. As Maria and Ingvar cherish their new life with their ‘daughter’ Ada, things are thrown off-balance by the arrival of Ingvar’s free-spirited brother Pétur (Björn Hlynur Haraldsson), who questions their strange new family unit — and mysterious omens from the scenic countryside spread unease among the happy family.

A24 is certainly no stranger to featuring the bizarre and disorienting (at this point, it’s practically their calling card), but “Lamb” stretches the boundaries of that identity perhaps further than they ever have before, and does so within the ethereal confines of the picturesque Icelandic mountains. It’s perhaps a cliche to say that a film’s setting is a character in and of itself, but when a film has so little narrative structure or action as “Lamb,” every lingering landscape shot begins to feel like writer-director Valdimar Jóhannsson’s way of filling the void otherwise left by dialogue.

Where similarly slowly-paced borderline horror films like “The VVitch” have used landscapes to create an eeriness and impending sense of dread, the beauty of the mountains in “Lamb” does nearly the opposite, lulling both its characters and the audience into a peaceful state of contentment, getting us ready and willing to accept the jarring new “child” as a miracle of nature and something to be cherished, not the unsettling amalgamation outsider Pétur initially views her as.

Also crucial in helping develop empathy for Ada and the bizarre family unit she helps create is Rapace’s commanding yet paradoxically demure turn as Maria — a mesmerizing performance that both sets the tone for the film and anchors the often otherwise aimless narrative. Though not particularly outspoken, Maria is a fascinatingly written character — content to live a quiet, humble life but utterly fierce in her devotion to her “daughter” and willing to take extreme measures to preserve the sanctity of her family.

Though “Lamb” has a tertiary antagonist, Maria also functions as an often ambiguous central figure — and Rapace’s layered performance brings all the ferocity one would expect of a mother desperate to protect her child, while simultaneously revealing the insecurity and refusal to face reality that comes with having devoted so much time to telling oneself the same lie. She’s a strangely tragic figure, even in her most startingly reprehensible moments, and a testament to both Rapace’s understanding of her craft and Jóhannsson’s brilliance as a writer-director.

Helping to further bring depth to Rapace’s Maria are brothers Ingvar and Pétur who nearly unknowingly duel for her affection; their diametrically opposed personalities make for both fascinating foils and compelling characters in their own right. Pétur in particular makes for a clever audience stand-in — initially balking, just as I did, at the absurdity of the life that Maria and Ingvar have built for themselves with Ada.

“Lamb” boasts a unique structure, willingness to rely on atmospheric visuals, and incorporation of mythic, grandiose concepts instead of more traditionally plot-driven conventionalities. Such a singular combination creates a viewing experience that, though at times tiresome, entirely envelops the viewer and delivers a powerful, unsettling, melancholy film that tells a remarkably simple story. Though painfully misadvertised as a borderline horror film, its thoughtful, delicate framing and folklore-inspired narrative make it a lavish journey of a film well worth trekking to the Icelandic mountains for.