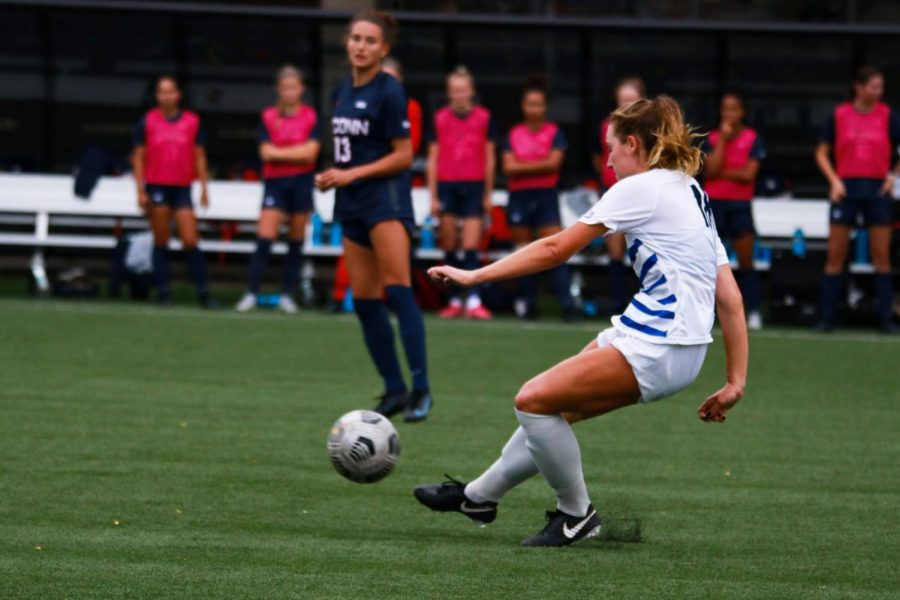 Defender Megan Malecha kicking the ball away during their game against UConn.

DePaul women’s soccer got their first win against the University of Connecticut  with a 1-0 victory at Wish Field on Sunday. The win now gives the Blue Demons a three-game win streak in conference play after defeating Villanova at home and Seton Hall on the road.

DePaul was tired throughout the game, struggling at times to keep up with the Huskies’ pace. Although the energy struggled, it did not impact their defensive efforts. Both teams’ defensive intensities set the tone in the beginning. The Blue Demons had five shots and one corner kick compared to the Huskies’ four shots and four corner shots, with none leading to score, providing a scoreless first half.

Coach Michelle O’Brien elaborated the energy issues, emphasizing the importance of maintaining the same energy for an entire 90-minute game.

“I think we had a rough road trip to Seton Hall and it catches up with you, especially on a Sunday,” O’Brien said. “We tried to rotate players as much as possible and trying to keep our players with fresh legs. For us, we continue to talk when you are fatigued to be super focused in the moment, determined in every play. It’s about the final focus and letting the ball do the work.”

The tables turned in the second half. Though the team started off slow, senior midfielder Ellie Mink gave a spark to bring the team back to life with a goal assisted by Megan Malecha in the 33-minute mark. From that moment on, the Blue Demons energy picked up and they controlled the duration of the game.

Mink scored the first goal of her collegiate career today. She emphasized her excitement in scoring her first goal to give the team a lead in the second half.

“I’m really pumped because it is my senior year and I have hit the crossbar so many times and I knew it was coming,” Mink said. “I was really excited. We practiced the plays for the set pieces so many times and I’m happy that I can be the one to finish it this time.”

Coach O’Brien was ecstatic to see Mink score her first goal, giving her praise for Mink in being an unsung hero for the team.

“I’m so happy for Ellie,” O’Brien said. She deserves every minute of it. She is such a veteran player in our program, a captain in the midfield and kind of an unsung hero so for her to get on the scoreboard and get the game winner, it is huge.”

Malecha, who assisted on the goal, highlighted the importance of the goal due to tons of practice on the headshot.

“I take set pieces for the team and we have been so close on so many occasions,” Malecha said. “Ellie has been heading them and hitting the crossbar. I set it today and said this is it and once I hit Ellie was there to put it in. It was an unreal feeling.”

According to DePaul Athletics, Morgan Turner is currently fourth all-time in scoring with 31 goals. When she scores a goal, the team is 17-1-1. Turner did not score a goal in this game, but she harped on the importance of teamwork and expressed her excitement for Mink to get in the scoring category.

“Soccer is a team sport and different players need to step up on different days,” Turner said. “Today, Ellie’s goal was phenomenal and we needed to win. It was awesome to see her score and play so well.”

“You have to have other people that put the ball in the back of the net to take some of that pressure off of Morgan,” O’Brien said. “Of course, teams are going to be scouting her and have more numbers around her. Maybe it’s a good thing so it can free up for someone else to have a clean look at goals.”

The team continues with conference play against Xavier this week. For Mink, being from Cincinnati, OH, this game is personal.

“Cincinnati is my hometown,” Mink said. “I know people on the team and we have a great history with them. We battle hard and I know it is going to be a grind.”

Coach O’Brien is looking forward to their conference matchup, but wants to make sure the team stays focused and plays their game on the field.

“Xavier is a great team,” O’Brien said. “They are at the top of the table right now, they are a solid team. The program has changed a lot over the last four years or so. For us, it’s important to play our game and be disciplined to work hard and with us being at home we have a slight advantage so hopefully we get to capitalize on that.”