Chicago Marathon runs again after a year off 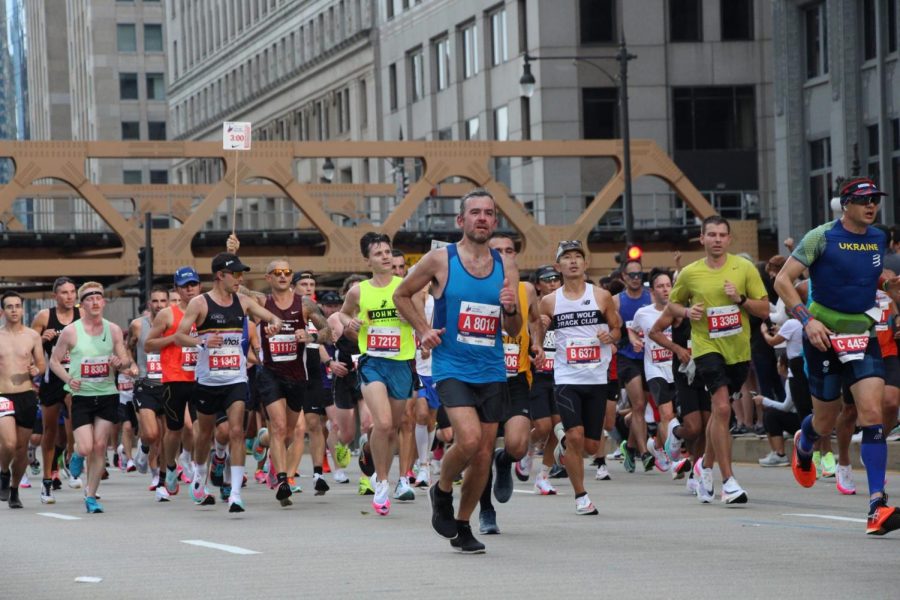 Runners navigate N Franklin Street as they approach the 13 mile mark in the Chicago Marathon Sunday.

After not running last year due to the pandemic, The Bank of America Chicago Marathon returned for its much anticipated 43rd edition of the race through the city on Sunday, Oct. 10.

From Millenium Park to Uptown, through the Loop and Bronzeville, approximately 35,000 participants ran their way through 29 Chicago neighborhoods.

“Just having all those people lining the streets again … just as much as I remember in 2019. People really come out for this event,” Emma Bates, second woman overall and first American to cross the line, said in a post-race press conference.

The wheelchair race kicked off the day’s events with 41 competitors. Americans Daniel Romanchuk and Tatyanna McFadden crossed the line first among men and women, respectively.

Weather was a major concern going into the weekend. At 7:20 a.m., right when the wheelchair races began, the temperature reached 71 degrees. It only got warmer throughout the morning as the participants lined up. According to the National Weather Service, unseasonably high temperatures continued with a high of mid-80s.

Marathons are unique in that world-class athletes line up with casual runners and walkers alike.

“It was definitely the heat,” Ross said.

She was shuttled back to Grant Park and was able to cool off and rehydrate under the care of medical officials.

“I am disappointed, but I’m glad that I stopped,” Ross said. “I know what a heat illness feels like.”

Spectators along the course motivated Chad Rosenburg, of West Town, to the finish.

“This is my second Chicago [Marathon],” Rosenburg said. “The weather wasn’t as bad as I thought it was going to be, but the wind was a little insane.”

According to Megan Richards Martin, a marathon spokesperson, an estimated 1.7 million spectators lined the streets of Chicago on Sunday.

“That’s unreal. That’s actually super cool,” Rosenburg said. “I got chills coming down the last mile and a half because everyone is like, ‘Don’t stop.’”

Participants from all over the country and world descended on Chicago for the marathon.

“Four years ago, I ran this marathon with no experience mentally, physically [and I] came back with vengeance,” Jerry Francois of Brooklyn, New York said. “I ran about 20 minutes faster than my previous Chicago personal best, but not the time that I wanted. Overall, [I’m] happy to be in the city and (with) how the city embraces me”

“This was my first marathon ever, and it was quite the experience,” Handal said. “I saw lots of people collapse. I literally could not have done it without my friends or my music or all the hydration stations.”

Handal qualified in her age group for the Boston Marathon

“I’m still alive to talk, smile and laugh – and walk to get some pancakes, so I guess there could be another [marathon] in the future.”

In 2019, Chicagoans did not realize it would be 728 days until the next marathon. The 2020 Chicago Marathon was canceled due to the ongoing COVID-19 pandemic.

“We had a great event in 2019. We had so [much] momentum. So many benchmarks were hit – participation, Brigid Kosgei’s magnificent world record,” Executive Race Director Carey Pinkowski said in a press conference on Friday. “We were on an upward trajectory and then to pause it, it’s tough and it’s great to be back.”