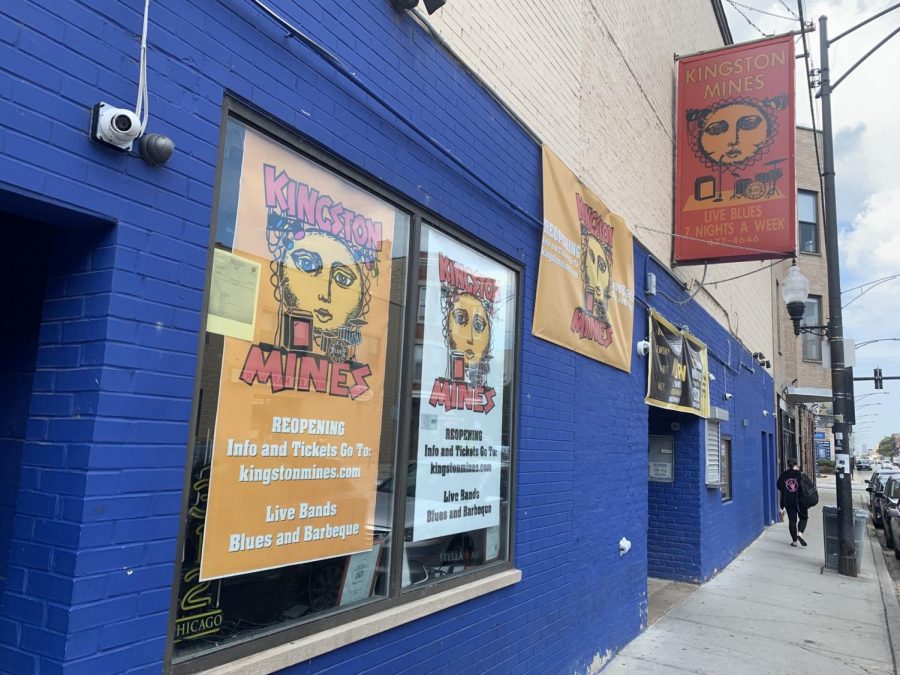 The exterior of Kingston Mines.

For much of the last year and a half, we toiled away inside, hoping for an opportunity to see a show, grab a drink or just have dinner somewhere other than the kitchen table.

Covid-19 vaccinations have made that hope a possibility, as 68.9 percent of Illinois residents have received at least one dose, according to Mayo Clinic. But anything below unanimity opens the risk of being exposed to Covid-19 at any restaurant or show one might try to enjoy.

Unless you’re not allowed inside.

“It was a decision I made alongside my staff that we were going to be completely vaccination only,” said Donnie Biggins, owner of Golden Dagger, a coffee bar and performance venue in Lincoln Park.

Golden Dagger is one of several locations in the Lincoln Park and greater Chicago area to require proof of vaccination for customers and employees, alongside places such as Kingston Mines, Lincoln Hall and Trader Todd’s,to attend events or be a dine-in patron.

“Mainly the reason why we’re doing that is for the safety of the musicians that are performing in our space,” Biggins said. “A lot of them are touring, a lot of them do this for a living and we need to make sure we’re doing our part to provide a safe space for this industry to perform in.”

These changes appeal to patrons, too.

“I don’t think that a place should have to require vaccinations, but I would prefer that they did because it makes everyone more safe,” DePaul junior Jonah Benthusen said.

Ensuring the safety of performing artists and patrons is vital for the recovery of the dine-in restaurant industry, which has declined 17 percent since 2019, per Statista.

Despite the new requirements, there doesn’t seem to have been any significant drop off in support.

Since the implementation of their vaccine mandates, no restaurant or venue in Lincoln Park has experienced resistance from patrons that would cause them to abandon it. “The initial change was shocking to some people, but the general public has gotten with the program,” Biggins said.

Vaccine mandates continue to be controversial, as evidenced by the 36.5 percent of Chicagoans who haven’t received an inoculation. From Forbes, 21 percent of individuals 18 to 29-years-old said they would never get vaccinated, according to a poll from the Kaiser Family Foundation. Their reasoning ranges from concerns about side effects to skepticism about vaccine efficacy against Covid-19.

However, businesses that have decided to institute these mandates are receiving support from high places.

“I applaud those businesses and venues that are requiring vaccination proof or a negative test in order to get admittance and I think we’re gonna see more of that,” Chicago Mayor Lori Lightfoot said this September in response to a letter from several aldermen urging a vaccine mandate for public indoor settings, including restaurants and performance venues, according to ABC.

It remains a possibility that vaccines could become a requirement for businesses on a city-wide level, although not everyone is racing to institute them.

“The responsibility for vaccination rates is squarely on the alderman and the mayor and not on small businesses,” said Roger Romanelli, coordinator of the Chicago Restaurants Coalition, in a September new conference, per the Chicago Sun-Times.

Much of the hesitance to pass mandates expressed by Romanelli and others stems from their belief that the city would be passing on the responsibility of “handling” the pandemic to small business owners — and even larger venues — by making them enforce rules that may curtail the spread of Covid-19, but ultimately hurt their business.

As with any voluntary decision that a small business makes, it all comes down to how customers are going to react, and whether this kind of change will harm more than it will help.

For some, the decision to try and balance Covid-19 safety and business has been successful.

“Overall, I’m really proud of our community and industry and everyone following the rules and allowing us to be open for events and bring some joy to our community,” Biggins said.

In the coming months, when temperatures drop and indoor venues just become venues, it will be even more pertinent to know which businesses will need customers’ vaccination status.

“I think a prudent business owner would do vaccine mandates because it makes themselves, their patrons, and staff safer,” Benthusen said.

Ultimately, with or without a city-wide mandate, restaurants march towards an uncertain future, only hoping that their customers will be there with them. “We’re still still fully operating, we’re doing everything,” Biggins said, “We can keep going and I feel that the community has our back.”