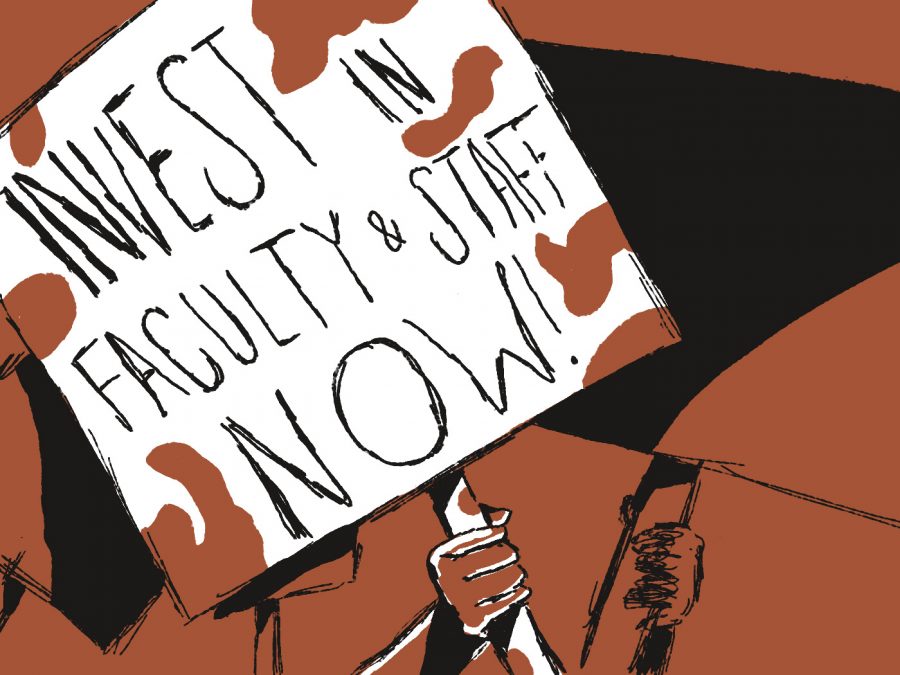 After his career was over, the great Chicago Bears halfback Gale Sayers wrote an autobiography entitled “I Am Third.” By this title, he meant that he always placed himself third behind God and his family. I believe that DePaul has put investing in faculty and staff in third place behind physical capital spending and growing the endowment. The future of DePaul University depends on a shift in long-term priorities to put the faculty and staff who directly affect student success first.

In any organization, such as a university, there are three types of capital. Physical capital consists of the buildings, equipment and software that enable us to deliver education and provide other services for our students. Financial capital consists of the endowment minus any debt. DePaul’s President and Board of Trustees understand these well. From 2004 to 2020, DePaul invested approximately $800 million in physical capital, an average of around $50 million per year. During this time, however, enrollment shrank from 25,000 at the peak to under 22,000 today. We are now locked into a physical plant that is bigger and more expensive to maintain than what we need today.

Toward the end of this “building phase,” senior administrators and the Board of Trustees shifted gears, reduced capital expenditures and adopted an austere budgetary stance in response to the enrollment decline. This resulted in operating surpluses that they used to grow the endowment and reduce the overall debt. This policy has successfully increased our “financial capital.” From 2016 to 2020, total available funds less bond debt went from approximately $350 million to $700 million, doubling in four years!

However, there has been little investment in the third type of capital: “human capital.”. In fact, the University implemented two early retirement plans to reduce its human capital by replacing retiring senior faculty and staff with cheaper labor (especially term and adjunct faculty). Staff positions were also eliminated, further diminishing our human capital.

During the pandemic, we observed how useless “physical capital” became as we could not use our buildings and classrooms for over a year. It was the human capital that saved the University. The faculty, many with little or no technological experience, built hundreds of online courses to continue delivering education to our students in difficult times. Staff assisted faculty in course development and provided essential services to students remotely. The faculty and staff lived the mission of St. Vincent de Paul by finding a way to serve others in the most challenging of circumstances. It was an extraordinary effort that deserved the highest praise and respect from senior administrators, the President, and the Board of Trustees.

What did the Administration do in response to this real world demonstration of the value of “human capital” during the Covid-19 pandemic? First, they cut the annual University contribution to our retirement savings in half. Second, they froze our salaries over the past 20 months at a time when the Consumer Price Index rose by 5.75 percent. The impact of these two decisions was to reduce the inflation adjusted compensation of employees by approximately 10 percent. Third, they changed the model of shared governance with respect to the budgetary and financial affairs of the University in a way that diminished the role of faculty and staff.

On Sept.19, a Council of the Whole was convened that brought over 500 full and part-time faculty together in a meeting that met the rules for a quorum. We voted on five resolutions, and these resolutions have now been formally ratified by over half of the full-time faculty. So what do faculty want? We want our voices to matter in University governance. We want more tenure track faculty in the areas of the University that need them the most. We want the restoration of the University’s contribution to our pensions. We want to be protected from inflation like the employees of other firms. In short, we want the Board of Trustees to care about human capital as much as they care about physical and financial capital. We believe that this is what St. Vincent de Paul would have wanted. A first step that the University could do is to repeal permanently the “return to principal” item in the budget which would make income from our endowment available (as it is in other universities) to restore compensation and convert term faculty positions into tenure track ones.