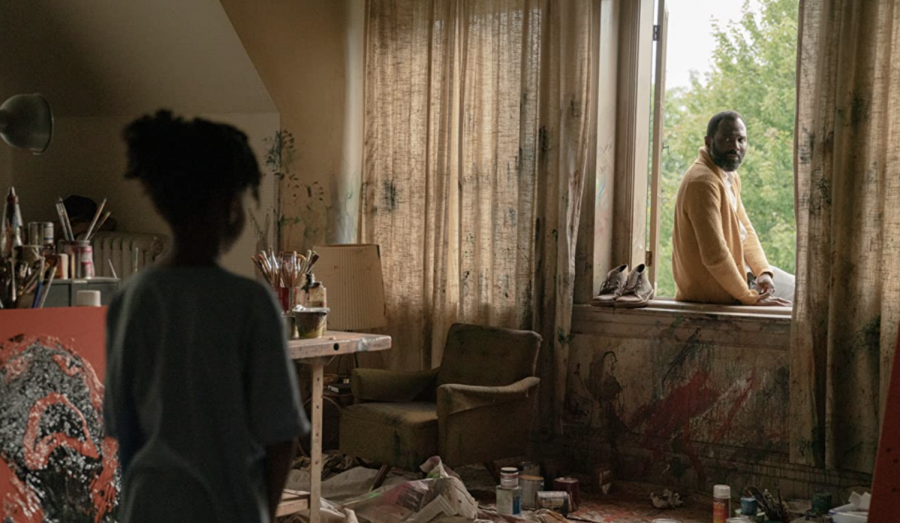 Candyman (2021), a direct sequel of the fan favorite 90’s horror, is in theatres this fall and has spurred mixed reviews. Directed by Nia DaCosta and co-written with Jordan Peele, the new Candyman is a retelling of the Chicago urban legend from the perspective of a Black artist looking back.

The original movie, directed by Bernard Rose, stars Virginia Madsen as Helen Lyle, a grad student researching murders connected to an urban legend at a housing project in Cabrini-Green. The legend tells a story about a hook-handed man that appears when you say Candyman in the mirror five times. The story peaks her interest and she is inspired to take on the project of debunking the mystery.

The original remains famous among fans and left high expectations for the remake. This mediocre rendition, however, does nothing meaningful to contribute to the horror genre. The story follows Anthony McCoy, played by Yahya Abdul Mateen II, an artist unraveling the past stories of Candyman only to be consumed by the horrors himself. With numerous famous actors featured, the film itself has so much potential, which made this missed mark increasingly more disappointing.

Within the film there are certain points actors fell under the disappointing line with below average acting for example, Clive Privler, actor Brain King, has a sex scene with Jerrica Cooper (Miriam Moss) and the acting felt extremely redundant and unexpressed, more of a forceful scene then part of the cinematography created. This is not an uncommon scene within the movie as many parts felt like high school drama club amongst professional actors.

Overcompensation of baseline repetitiveness on the description of gentrification comes off more as a middle school essay. When Anthony McCoy (Yahya Abdul Mateen II) is told to find new inspiration and talks about his struggles of the south side being too “overplayed” McCoy reaches towards other forms of oppression for his artistic gain. The irony of portraying an artist exploiting Black pain for art in this movie almost seems too on the nose for the amount of heavy handed police brutality brought up randomly throughout the movie.

The film itself goes perfectly with Hollywood’s obsession with appropriating Black struggle and displays this through the horror genre, selling the burden of people of color in a neat package. While there were themes brought up that are “culturally sound,” like the scene with Anthony McCoy and William Burke in the laundry mat connecting over mutual trauma it comes off as repetitive performance activism, instead of paving the way for more inclusive creative films it feels like it fills the mediocre spot of accommodating others as a checklist instead of a new way to pave the way for better films.

With Jordan Peele’s background, our expectations were high for an original movie with a twist on white washed revision. Get Out, and Us portray different versions of our expectations on cinematography. The script and Dialogue alone were grabbling for reference towards a deeper meaning and this is just another example of movies reaching towards cancelled culture.

The film received mixed reviews when it released, but steadily rose to a 72% audience rating on Rotten Tomatoes, filling a void in a starved pandemic-ridden box office. The film grossed $58.9 million domestically, placing it 12th overall in the year. “Candyman” doubled its budget of $25 million.

Overall the film itself was understated within comparison to the first film. With its inability to appeal to cancelled culture and half and half acting the movie itself needed more than what was portrayed in the hour and thirty minutes. The expectation puts a faulty perspective on both the actors and director on their future endeavors.