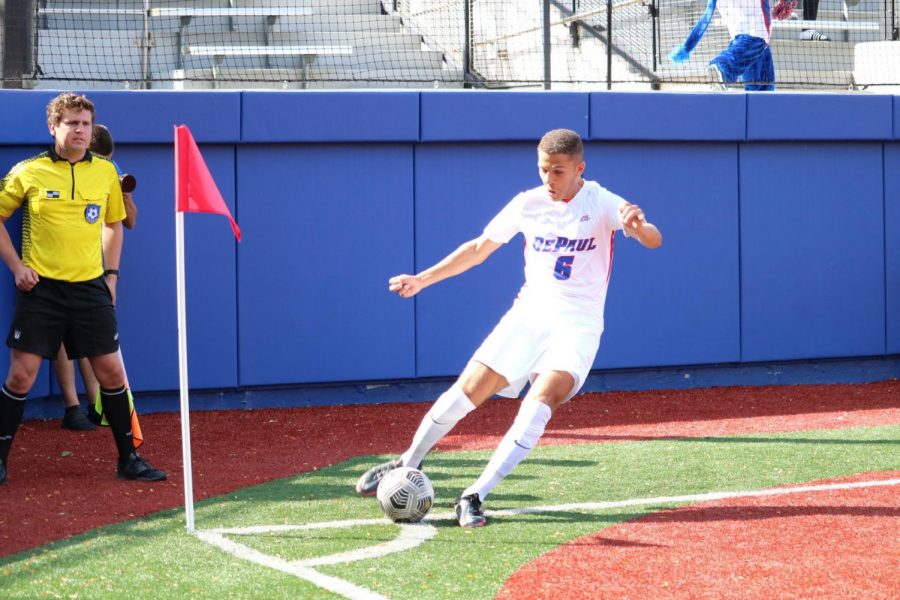 In another midweek game at home, DePaul men’s soccer loses 1-0 to Seton Hall.  The Blue Demons now have a record of 6-5-1 overall and are currently 5th in the Big East Conference. Meanwhile, the Pirates improved their overall record to 5-5-2, yet are at the bottom of the Big East with a record of 1-4.

After tying with Providence on the road last Saturday 1-1 in 2OT, DePaul took on Seton Hall. It was a hard-fought matchup against both teams throughout, but the Seton Hall Pirates’ forward Jordan Jowers scored the game-winning goal in the second half.

The weather started off pleasant in Wish Field, but towards the middle of the second half, the game had to be delayed an hour due to heavy rain and lightning in the area.

The Blue Demons had a slow start offensively that consisted of them taking 3 shots in the first half. The Pirates on the other hand were in control offensively and took a total of 9 shots. However, neither team scored during the first half due to their strong defense throughout the game.

In addition, it was a very physical game, with DePaul having 11 fouls total and Seton having 20 fouls in total.  DePaul’s sophomore goalkeeper, Gandhi Cruz, made some big time defensive plays throughout the entire game.

“We knew it was an important match, they were 0-4 in the conference,” Cruz said. “We knew they were in a dangerous spot to approach lightly. However, we will move on and put away our chances. That’s the big thing, we created enough chances to win this game and it all comes down to that.”

However, when the delay happened, the Blue Demons were unable to secure the win with the little time they had left.

“We knew they were going to be direct and super dangerous with crosses. Their aerial ability is dangerous and they are very committed to it,” DePaul head coach Mark Plotkin said “Overall they make it really hard to play against them which is why they’ve scored so many goals this year. We knew we had to be up for that challenge and figure out how to score and do things our way as well. Unfortunately today we just couldn’t get it.”

Despite the loss, Plotkin expressed key moments that stood out during the game.

“I thought we generated three very high quality opportunities that needed to be goals,” Plotkin said “If we put those away then one mistake in the back doesn’t hurt us. Gandhi came up massive with a penalty kick save to keep us in the game. I think that energized us to go forward and generated three phenomenal chances to score a goal.”

“We are really strong and maybe one of the strongest in the conference,” Cruz said. “I am really proud of how well we defend and I think that everybody is disciplined on defense. Which is why we are able to get the results we can.”

“It sucks both ways, so we can’t really use it as an excuse, even though I would like to,” midfielder Matthew Brickman said about the rain delay. “Overall both teams dealt with it, honestly I thought regardless we came out ready to play. Unfortunately, they put their chances away and we didn’t.”

The Blue Demons travel to Valley Fields to face off against Marquette University next Saturday, who are 5-5-1 overall and 2-2-1 in the Big East.