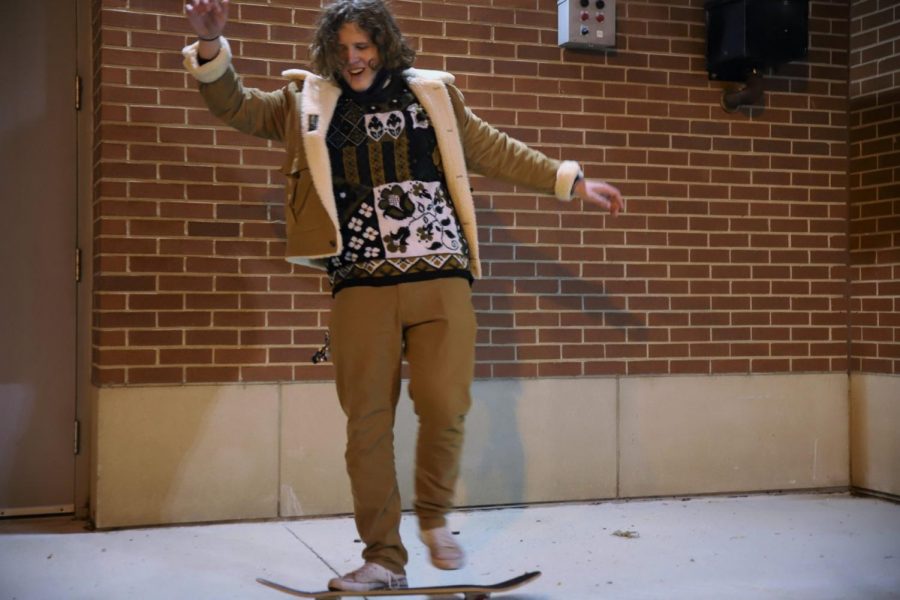 Sophomore Josie Moore stares at the clothes in their closet before grabbing at any clothes. Depending on the day, Moore chooses to dress masculine or feminine, or androgynous if they do not feel like deciding.

“I spend most of my time in The Theatre School (TTS) and a lot of students here have very similar senses of styles, but there’s also a huge range of appearances,” Moore said. “I mean, it’s a theater conservatory for crying out loud, there isn’t exactly a ‘wrong’ way to look.”

Moore isn’t alone, many students at DePaul feel they are accepted for dressing or looking however they want to. Freshman Gylani Oliver said she doesn’t think there is a de facto dress code at DePaul, which helps students feel like they can express their true selves.

“I feel like DePaul is partially accepting of it,” Oliver said. “DePaul has this unwritten rule of ‘as long as it’s not too overbearing or makes the school look bad, you’re good.’”

Freshman Vanessa Ramos said she also thinks DePaul has an accepting atmosphere for people to dress how they would like, but despite the atmosphere, Ramos said there is still potential to be rejected by some students.

“In a perfect world everyone would be accepting of everyone’s looks, but in all honesty you can get outcasted by any group and anyway you look like,” Ramos said. “It might not be in a bad way, but after going to school here for a while, I don’t think they are as judgmental compared to going to a school where style isn’t considered cool.”

Aside from general style, Moore said that when it comes to feeling accepted for your appearance at DePaul, race cannot go unnoticed. “I think it’s really important for me [to address] that my appearance carries a lot of privilege solely because I am a white person,” Moore said. “I know that this privilege has a big part in whether I feel accepted at DePaul.”

Oliver felt the same way. “While there is an influx of white people at this school that have a tendency to dress a certain type of way, I don’t believe Depaul’s atmosphere pressures me to dress in any kind of way,” she said. “I believe I’m able to dress how I want without feeling like I’m completely out of place. In the Lincoln Park Campus, I do feel like there’s a sort of stigma against looking too ‘ghetto.’ Like I said before, there is a large influx of white people and a small population of Black people. If I were to dress in a stereotypical way according to my race, I would definitely be judged.”

Moore said there is a lot to take in with being in Chicago, especially in terms of encountering different types of people. But while there are benefits that come with each person being different in their own way, they said there is always a negative side to being expressive through your appearance and style.

“DePaul absolutely doesn’t exist in a vacuum away from the real world,” Moore said. “Slut-shaming is a huge problem. People of color are constantly getting hit with microaggressions and targeted comments about their hair or traditional clothing they might wear. Transgender folks can’t always appear the way they want to because they feel as though it isn’t safe for them to come out, or maybe their gender expression doesn’t perfectly align with their gender identity the way this cisheteronormative society deems it should. Fatphobia is still a huge problem everywhere and shapes the way fat people like myself feel like they can appear. These are problems everywhere in the world that I absolutely do not doubt.”

Moore said they experienced some of these issues, especially with being a plus-size person in the theatre school. “I know I am larger than a lot of my classmates,” they said. “I identify as a plus-size person and that’s been something I’ve really been embracing over the last year or so, and while I am trying to be more comfortable in my own body and I know most of my classmates aren’t judging me on the basis of my size, it’s still an insecurity that lingers in the back of my mind — especially in more movement-based classes.”

Ramos said if someone dresses as they prefer, they are more likely to feel like themselves. “Honestly, go with whatever you want at the end of the day,” Ramos said. “You are going to end up regretting what could have happened and, you never know, maybe someone will compliment you or appreciate you from afar.”

Oliver said the challenges one may face are great, but Chicago is the best place for someone to express themselves especially with the different types of people in the city. “Dress how you want,” Oliver said. “You’re in Chicago, Illinois of all places. What they think of you is just an ignorant mindset that comes from fear of individualization. If your mentors or professors or even the administration is judging you based on what you wear, then speak on it because that’s such an ignorant and outdated way of thinking.”