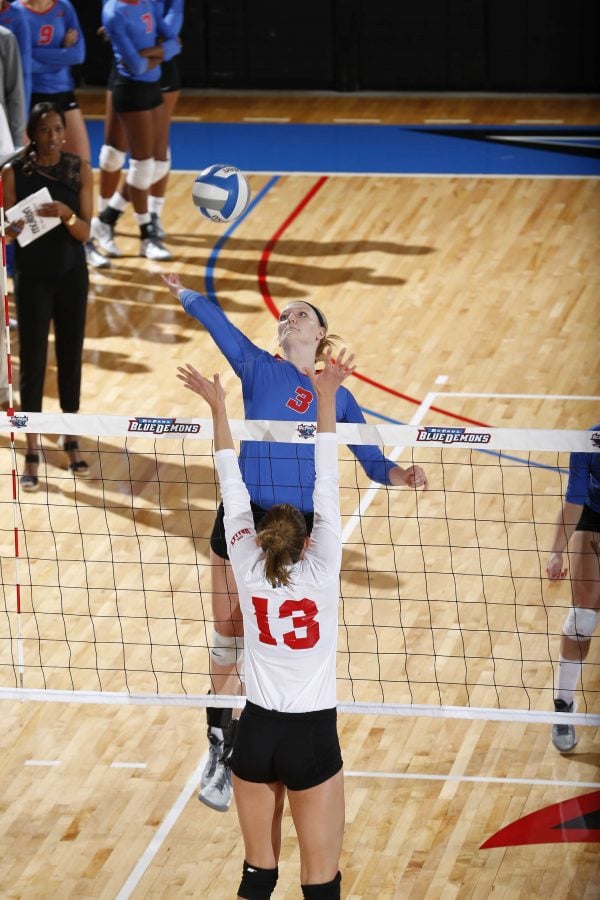 Freshman Rachel Breault rises up for a ball. DePaul fell to 3-24 with the St. John’s loss. (Photo courtesy of DePaul Athletics)

After two competitive but eventually futile sets, everything fell apart for DePaul in the third set as they fell 3-0 to St. John’s.

“I think overall tonight we were pretty competitive in the first two sets and resilient in the third,” head coach Nadia Edwards said. “I think at the end, our confidence broke down and we have to get better at that.”

The Red Storm took an early lead in the first set with 10 kills before DePaul called a timeout, down 10-5 to St. John’s. The Blue Demons went on a 3-0 run to cut the deficit to two in the first three plays out of the timeout.

DePaul would continue to chip away at the lead, bringing it to within one point at the next St. John’s timeout. The Blue Demons still trailed but at a more manageable deficit at 17-16.

DePaul came out strong to start the second set, jumping out to an 8-4 lead before St. John’s called a timeout. Caitlyn Coffey had two straight blocks in the middle of the run.

The Blue Demons would keep their lead all the way to game point, holding a 24-21 lead. The Red Storm, however, scored four straight to push the game 25-24 before the Blue Demons tied it up. St. John’s finished the set with two straight points to take a 2-0 match lead.

The Red Storm took their momentum from the second set to jump out to a huge lead at the beginning of the third. DePaul called a timeout after St. John’s had already taken a 14-6 lead with the outcome looking dire for the Blue Demons.

DePaul would have difficulty cutting into the deficit, getting to within five points at a timeout with the Red Storm leading 22-17. That would be the closest they would get, as the Red Storm finalized the victory with a 25-18 set win. That would give the Red Storm the sweep and a conference victory over DePaul.

With the loss, the Blue Demons fell to 3-24 on the year and 1-14 in the Big East. With everybody slated to return next year, however, Edwards is looking at this season as a way for the players to gel.

“I think it’s just growth and chemistry,” she said. “Throughout the season, the girls have had a chance to play almost 30 matches together and learn everybody’s strengths and weaknesses.”

The Blue Demons hit the road for the final three games of the season, heading to Villanova and Seton Hall Nov. 14 and 15, before closing out the season at Marquette on Nov. 22.