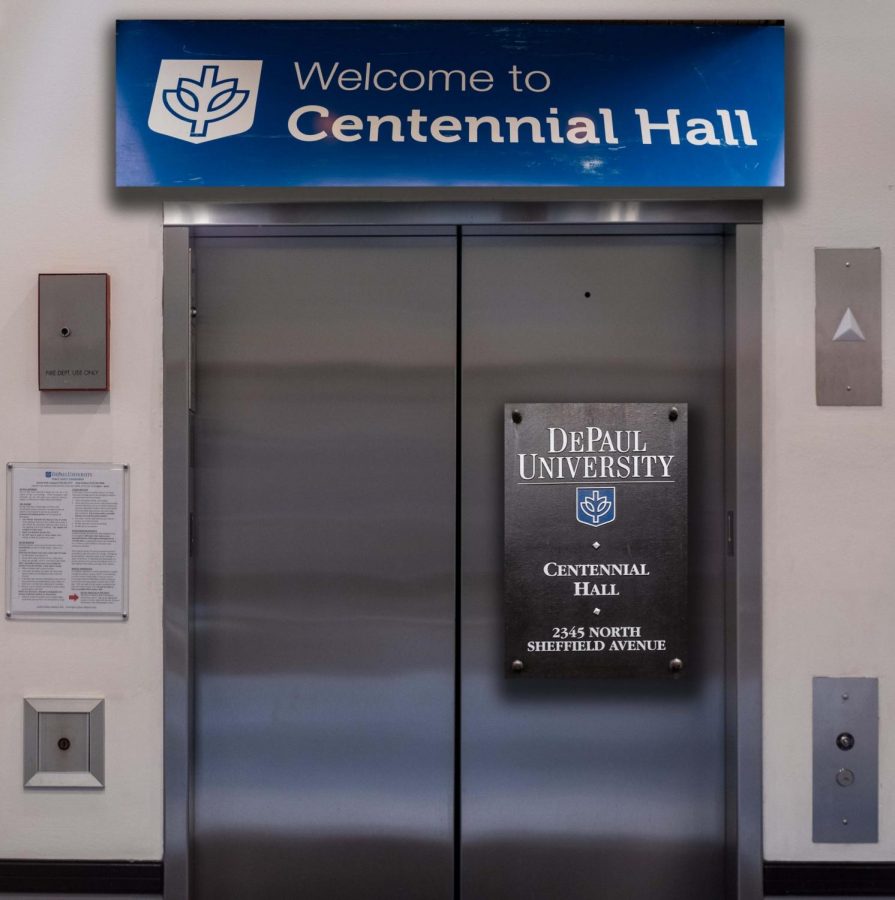 Correction: an instance of [Housing] was changed to DePaul as the source was speaking about the University as a whole.

The elevator in a “fully accessible” dorm on campus was out of service for a full week, leaving disabled students “trapped” in their dorms with limited access.

The elevator in Centennial Hall was reportedly out of service from Oct. 7 to Oct. 14, making it difficult for students to attend classes, grab meals or socialize.

The high rise elevator takes students from the third floor lobby of the building in Centennial up to the living areas on the fourth, fifth and sixth floors, and the repairs took about a week to complete.

Centennial Hall is equipped with a single elevator, and is one of several disability-friendly residential halls on campus. DePaul housing describes the dorm as, “wheelchair accessible.”

“They had concentrated students who needed elevator access and then trapped them,” said Gwenyth True, president of Accessible Futures at DePaul.

When the elevator malfunctioned two weeks ago, Housing and Facility Operations quickly began to assess and address repairs, according to Rick Moreci, director of housing, dining and student centers.

The repairs were more complicated and took longer than expected, Moreci said, and residents were notified of the service outage over email and public postings on the floors.

“In my over two decades of working in housing at DePaul, I almost never see any issue that takes this long to fix,” Moreci said. “…Usually elevator issues are fixed in hours, not days.”

During the week the elevator was out of service, True said it caused issues for students with disabilities, whom she said came to her with concerns.

“The first day or two, as it dragged on, students came to me, saying it was a disaster,” True said.

True said the broken elevator prevented disabled students from going to class, picking up prescriptions and going about daily life.

Students were able to leave the building via the stairs, despite safety concerns regarding their disability.

“Several students used the stairs, but it wasn’t safe to do so,” True said.

There was minimal communication about alternatives, and no repairs timeline provided.

“The protocol for assisting any student who may have a mobility issue or concern when an elevator or elevators are down is to work with that student to provide the level of assistance that makes the most sense,” Moreci said.

Kate, a second-year film student who would only be identified by her first name, is a resident of Centennial Hall. Kate said using the stairs during the week the elevator was broken was physically difficult.

“It put a lot of strain on my physical disabilities,” Kate said. “I can’t do a lot of steps.”

Kate said she was prevented from going about extra activities and only left her dorm for essentials.

“The only time I went out was for my classes and I came back, and I went to the dining hall,” she said.

One student met with DePaul Housing to voice their concerns — but said they felt disrespected and belittled by the experience.

“I think housing was trying to make me go away,” the student said. “There was one point where I was asked why I was getting emotional … I was so frustrated that I cried.”

Moreci said that only one student contacted Housing about the elevator.

“We very quickly offered to move the student to another building where the elevators were operational or to a first floor temporarily,” Moreci said. “No other students contacted our office that I am aware of.”

“[DePaul] is passive and reactive, they need to be proactive,” said David Hupp, SGA senator for disabled students. “Proactive accessibility needs to be proactively considered during the planning process of anything. And the only way to do that is by directly involving the disabled people directly in the decision making process.”

True said that she would have liked to see more updates about the elevator’s condition and more viable alternative exits.

Although the building has emergency exit procedures for disabled students, according to True, Housing didn’t present alternatives for every day and mishaps like the broken elevator.

To help this process, Moreci said students need to be registered with the Center for Students with Disabilities (CSD).

“In a perfect world, students with disabilities or any challenges requiring levels of assistance, whether they be permanent or temporary, would register their needs with CSD and then Housing would more easily be able to work with those students because we would know which students might need additional assistance,” Moreci said.

“We are already working on ways via our notification process to better capture students who need assistance when an issue like the Centennial elevator comes up,” he said.

“Disabled students deserve some transparency and to be able to see their needs are being met and there should be a way to hold them accountable,” True said.  “If you’re going to advertise it as accessible, it needs to be accessible all of the time. We need viable other options.”