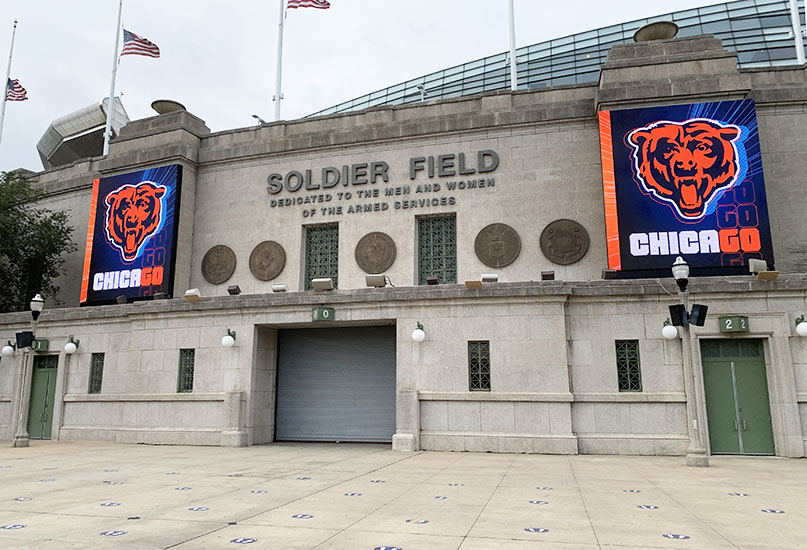 Chicago has been the home of the Chicago Bears for 100 years, and Soldier Field has been their residence for half of that century.

However, with the National Football League team working to purchase the Arlington Heights International Racecourse land, they may not be the Chicago Bears for much longer.

In June of 2021, the Chicago Bears put in a bid for the Arlington International Racecourse, sparking rumors of a potential move by the team out to Arlington Heights, Ill. The property is currently owned and being sold by Churchill Downs Incorporated.

“At first it was kind of shocking because my biggest thing was like, ‘what are they going to be called now, the Arlington Bears?’” Taylor Sudduth, who has lived in Chicago for four years, said. “And what also shocked me, I think, was reading Mayor Lori Lightfoot’s response and how she said that they were no longer going to be the Chicago Bears if they move.”

When the news that the Bears put in a bid on the property in Arlington Heights spread, Mayor Lightfoot shared a statement on the situation on Twitter.

“The Bears are locked into a lease at Soldier Field until 2033. In addition, this announcement from the Bears comes in the midst of negotiations for improvements at Soldier Field,” Mayor Lightfoot said in the statement on June 17. “This is clearly a negotiating tactic that the Bears have used before. As a season ticket holder and longtime Bears fan, I am committed to keeping the ‘Chicago’ name in our football team.”

On Sept. 29, the Bears signed a purchase agreement for the land with the Village of Arlington Heights and Churchill Down Inc., the team announced in a press release statement.

With that Purchase and Sale Agreement, the team has inched closer to a future in Arlington Heights and away from their long-time home in the city.

The Bears have not always played at Soldier Field. The team was established in 1920 in Decatur, Ill., but relocated to Chicago a year later.

In the city, the Bears shared a home base with the Chicago Cubs at Wrigley Field for nearly 50 years before moving further south to settle in Soldier Field in 1971 when the team was forced to find a bigger stadium that held more people.

Soldier Field received additions in 1978 to make it more efficient as a long-time home for the Bears. However, the stadium was renovated and re-constructed in 2002 with a project that kept the outside shell of the field but re-built and modernized the interior.

The Bears have now called Soldier Field their home for 50 years, but it’s not theirs. The team uses the stadium through a lease with the Chicago Park District and has been doing so since they first moved in. And there are many things that Soldier Field does not offer the team compared to other stadiums in the NFL.

Soldier Field is small, with a capacity of only 61,500 people, which is the smallest in the NFL, per Stadiums of Pro Football.

If the Bears move to Arlington Heights and build a brand-new stadium that they own, then they can build the stadium the way they want and make revenue off of the stadium.

Located in the Near South Side, one of the benefits of Soldier Field is the access that many fans who live in Chicago have to it. While driving and parking can always be challenging in the city, fans can drive in and park in the lots near Soldier Field.

Additionally, for those who do not drive, the CTA Roosevelt station is located about thirty minutes from the field, with the red, green and orange lines running through it. The Metra also has two stops located near the stadium, located at Museum Campus, 11th Street and another at 18th Street.

That level of access will change for fans in Chicago if the Bears move out to Arlington Heights. For drivers, Arlington Park is about an hour away, while public transportation can take around an hour and half or more depending on where the fan is coming from.

However, that is what fans from suburbs like Arlington Heights currently do in order to see the Bears games at Soldier Field.

There may be loss of those from the city who do not want to make the trip out to Arlington Heights, but it gives those who live in the suburbs the chance to attend the games they never had easy access to before. What one location loses easy access to, another gains.

“I do think for those people that are season ticket holders, that’s where it’s going to shift but then they’ll just get new season ticket holders that live in the suburbs that didn’t ever want to drive in the city,” Brandon Washington, a Bears fan of 30 years, said. “So, I feel like it’s still going to be fine, and people will be upset for that first year but it’ll just keep moving.”

Barbara Hunt, a season ticket holder for 36 years, understands the Bears’ motive for potential moving but wonders how the loss of the Bears in Chicago would impact the city.

“I think the Bears are in a tough position because the Park District owns the facility and so much of the revenue goes strictly to the Park District,” Hunt said while on her way to attend the Bears game on Oct. 17. “In terms of impact, I think it would be a terrible thing for the city of Chicago. I think of all the restaurants, the vendors, the locales that are around the stadium and the thousands of Bears fans that spend time there before and after games, so I think that would be terrible.

While the move is only a possibility at the moment, the Bears are taking steps towards making it a reality. And if they do, it may change the way that the fans and the city interact with the team.