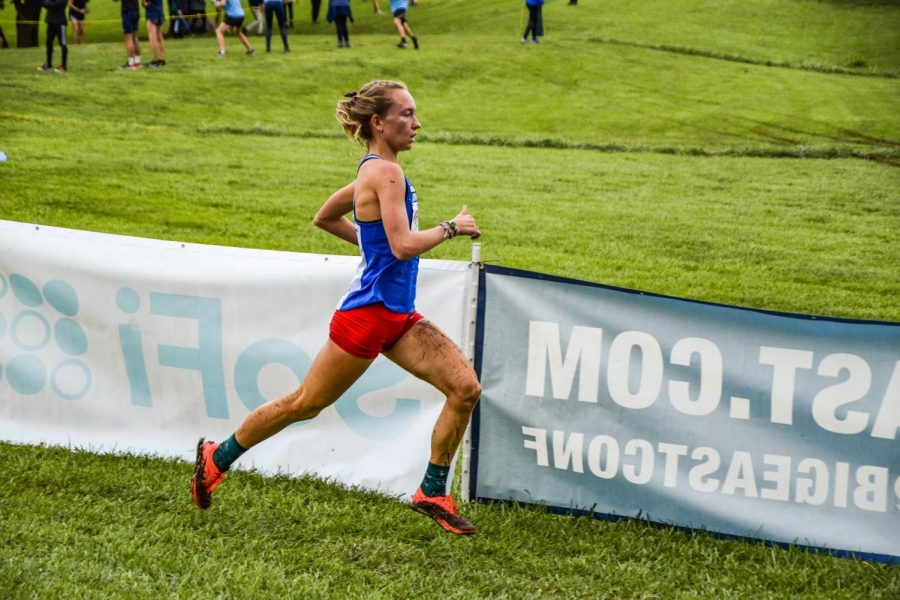 The course was muddy and the sky was gray as DePaul men’s and women’s cross-country took on the entire Big East conference in Carmel, Indiana on Friday at the Big East Cross-Country Championships.

The men finished in fifth place in their 8K race, their highest finish in Big East competition since they joined the conference in 2005, while the women finished in eighth in their 6K race.

The race took place at Northview Church, with Butler University as the host and defending champions from the men’s side. At Northview, a path is cut into the grass to guide the runners, and it is covered with hills to provide an additional challenge.

Carmel was hit with rain the night before, which left the course muddy and the ground soft as runners tried to keep their balance while navigating the course full of hills.

For the men, who ran the course first, senior Dominic Bruce was the first Blue Demon to cross the finish line in 33rd place overall with a time of 25:54.7 after battling the muddy conditions.

“Not ideal conditions, but I think that the best thing was that we were all in the same bad conditions together,” Bruce said. “That made it a lot more fun.”

Senior Shane Knanishu ended his race right after Bruce in 35th place with a time of 26:04.5 and appreciated having his fellow Blue Demon runners by his side as well.

“The conditions didn’t make it easy when you’re stuck out there alone, so being all around teammates is always helpful,” he said.

Bruce, Knanishu and their teammates all finished within 20 places from one another to get their fifth-place team finish.

For the women, junior Olivia Borowiak ended her race with a 20th place finish and a time of 21:42.5. With her top-20 finish, she received all-conference honors at the awards ceremony following the race.

Following Borowiak was junior Nina Amicon, who finished second for the Blue Demons and 43rd overall with a time of 23:00.4. Junior Alexa Havon followed less than a second later with a time of 23:11.9 for 48th place.

“There were quite a few times I thought my shoe was going to come off, it was so wet, but I think the girls put up a really good fight today,” Havon said. “I don’t think anyone gave up, we all tried our hardest, and that’s really what’s the most important about conference [competition], is the team coming together and fighting, so that’s really good.”

The women had to run after the men, so the course was beaten up and in worse conditions, making it challenging for them to run their 6K.

“It is very muddy in certain areas, people were running very gingerly in those areas and normally they would be pushing the pace, particularly going downhill,” Dopek said. “But to see people fighting, their eyes up, they know what teams we needed to be chasing and they were chasing them, and everybody finished. Nobody looked like they were going to fall out or have a bad race.

Butler dominated both the men’s and women’s races. The men entered the race gunning for back-to-back titles and were successful, with four runners placing in the top 10.

The women’s team for Butler put up a good race as well and finished in second but were unable to top the defending champions from Georgetown University, who also claimed a back-to-back title.

Following their Big East competition, the Blue Demons will look to the NCAA Midwest Regionals, which will take place on Nov. 12 at the Ashton Cross Country Course in Iowa City, Iowa.