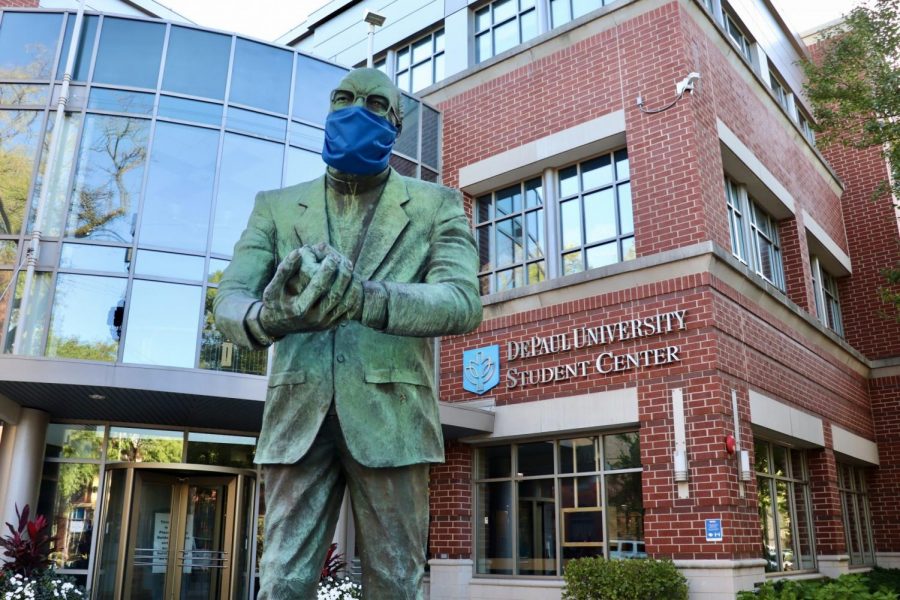 The statue of Father John Egan outside of DePaul's Lincoln Park campus.

Nationwide debates continue to rage over the efficacy and necessity of mask-wearing during this stage of the pandemic. In addition to a vaccine mandate, DePaul University is one of over 600 colleges in the country with an active campus mask mandate, posing a new set of challenges for staff members tasked with enforcing it.

The DePaul community has been largely respectful of the university’s mask requirement, according to DePaul marketing professor Zafar Iqbal.

“I’d say it’s been 100 percent compliance [in my classes],” Iqbal told The DePaulia.

Iqbal teaches two in-person classes, one for undergraduate students and one for graduates, this quarter. He explained that he has been lucky enough not to have any issues when it comes to his students obeying the mask mandate so far.

Should a student violate the mandate, however, Iqbal explained that professors were given instructions from DePaul regarding how to deal with those who refuse to wear a mask on campus.

Iqbal said “if a student doesn’t comply,” then professors are instructed to “have a conversation outside of the classroom with them” about the mask policy.

“If they fail to comply at that point, we are asked essentially to call public safety,” Iqbal said.

According to Director of Public Safety Robert Wachowski, public safety has been called on numerous occasions to enforce the mask policy in these situations. Wachowski said that this has been far more common on DePaul’s Lincoln Park campus than in the Loop.

“On Lincoln Park Campus, public safety has been called several times for mask violations,” Wachowski wrote in a statement to The DePaulia. “In these cases, the officers arrived on scene to either find that the person in question had left, was willing to put on a mask (or wear it correctly), or – in one case – was asked to leave the building for non-compliance.”

On the Loop campus, which houses the colleges of business, communication, computing and law, these instances have been more rare.

“On the Loop Campus, we’ve received only a few calls for mask violations,” Wachowski’s statement read. “In these cases, the people in question complied by putting on their mask.”

DePaul’s Covid-19 FAQ page indicates that students who do not abide by the mask requirement will be subject to the student conduct process, and may even be referred to the Dean of Students Office.

Dean of Students Ellen Fingado would not comment on whether these actions have been taken on any students yet, but did suggest that the Dean of Students Office is prepared to take punitive actions if necessary.

“Should the Dean of Students Office (DOS) receive a report alleging mask compliance concerns for a student or group of students, the DOS will work to gather all relevant information and address the issue as deemed appropriate which may include a referral to the Student Conduct Process,” Fingado wrote in an email to The DePaulia.

The DePaul Student Conduct page does not outline what specific actions students may face for violating the mask policy, and it remains unclear if any students have actually been punished for this.

Nevertheless, Fingado has been pleased with the DePaul community’s compliance with the campus mask policy thus far.

“From my perspective, the campus community has embraced the Take Care DePaul philosophy and understands the mandatory protocols and health & safety practices in place to ensure a healthy and safe learning environment for our community,” Finago wrote.