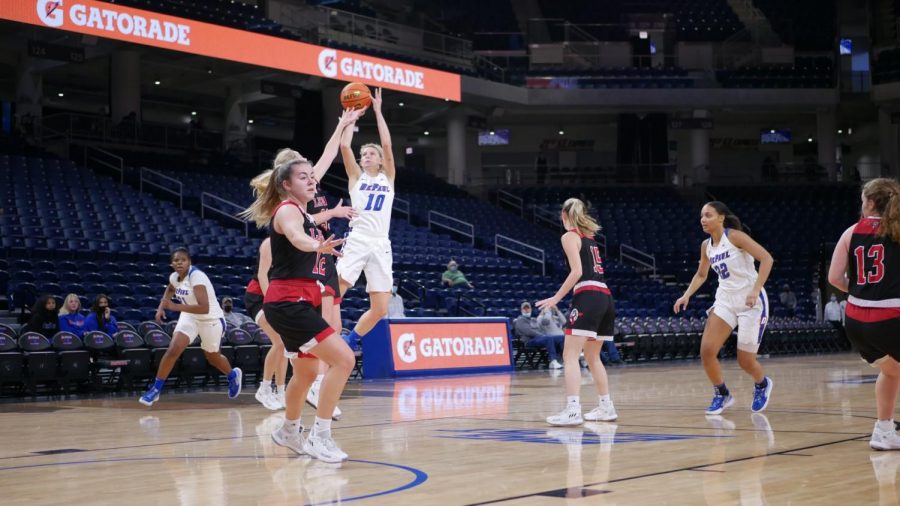 DePaul women’s basketball dominated from the beginning as the team returned to Wintrust for an exhibition game against Lewis University. The Blue Demons defeated Lewis by a score of 104-65.

Last season, the team split home games between Wintrust and McGrath-Phillips Arena, with no fans in the buildings due to Covid. Now back at Wintrust for the entire season, the Blue Demons are able to play in front of their fans once more.

Made up of veteran players, the team is led by returning seniors Lexi Held and Sonya Morris and graduate students Deja Church and Dee Bekelja.

Additionally, freshman Aneesah Morrow and Kaitlyn Ammons made their debuts as Blue Demons. Morrow, who’s sister is a junior forward on the team, dominated the game and finished with a game-leading 21 points.

The Blue Demons claimed the lead early over Lewis — that only increased as the game continued.

Morris landed DePaul on the board first with a 3-point jumper. However, the Blue Demons looked slow at the start, and the points went back and forth between the teams.

The Blue Demons began to come alive later in the first quarter, and pulled ahead to take a 10-point lead. By the end of the quarter, the Blue Demons were leading by 13-points and Held had six points.

The second quarter was much the same. Everytime Lewis began to challenge the Blue Demons, they responded quickly and were able to take advantage of a few Lewis turnovers.

However, while the Blue Demons controlled the game in the first half, they lacked a spark that head coach Doug Bruno noticed.

DePaul came out flying in the third quarter, and the first three baskets were scored by Held, Church and Rogers.

By the end of the third quarter, DePaul had scored 32 points while Lewis had scored 14, and the Blue Demons led 82-48.

Lewis began to challenge the Blue Demons in the fourth quarter and pressured their defense. However, the Blue Demons’ continued to add to their lead, and Lewis was never able to overcome it.
By the end of the night, DePaul dominated Lewis in every category. The Blue Demons scored 21 points off of Lewis’ turnovers, while Lewis scored eight. DePal also had 76 points in the paint, 27 points off second chances and 26 points off the bench.

Morrow finished with 21 points and 14 rebounds, while Morris had 17 points and Rogers had 13 rebounds.

“I think I’m learning the game more each and every day and getting better, so I’m understanding the concepts of rebounding, sharing the ball when needed, instead of taking extra dribbles or taking bad shots,” Rogers said. “Obviously, sometimes that’s going to happen, but I’m just trying to learn overall and be the best player I can be overall, not only for myself but for my teammates.”

The regular season for the Blue Demons begins on Tuesday, when the team takes on Texas Southern at home. DePaul graduate Allie Quigley will be honored for her WNBA Championship win with the Chicago Sky.