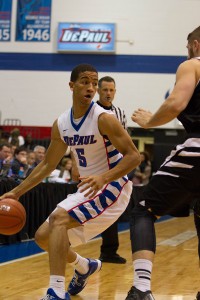 Pride can be a funny thing. The pain Billy Garrett Jr. felt in his knee on a bus ride to the charter plane for an away game in January of last season was a feeling that he hadn’t felt in nearly two years. He knew what was happening, but hoped the pain would subdue when he took off.

In the middle of the air, Garrett was having a crisis of his sickle cell disease.   It was then he told his father Billy Garrett Sr., and his head coach Oliver Purnell what was happening.

Garrett, a sophomore who was named Big East Rookie of the Year a year ago, missed two games because of that crisis, the term that’s used when sickle cell acts to cause extreme pain. The sophomore guard has sickle cell disease, a disease that mutates blood cells into a “sickle” shape to limit blood flow or clog vessels.

In January, Garrett spent time in two different hospitals during a span of four days for that crisis on the plane. Garrett, who went to the emergency room after the plane landed, said the first hospital prescribed too strong of a dosage, which led to an even worse case of dehydration and vomiting. Garrett then went to another hospital where he took more time to recover.

“I was so bad by that point. I had to stay there for three or four days,” Garrett said. “It’s like a continuous ache at its worst. It’s just a bad, bad thing — it hurts. … New Jersey is probably the worst crisis I’ve ever had.”

To his knowledge, Garrett is the only athlete — college or professional — who has sickle cell. Garrett has the SC form of the disease, which is less severe than the SS form.

Garrett has had to work carefully with the coaching staff to communicate any potential problems. He’s had to make “simple” adjustments that involve plenty of hydration and rest.

“We just pay attention with the doctors, trainers and Bill to see how he’s doing,” DePaul head coach Oliver Purnell said. “It’s important he stays hydrated. We’re constantly listening to them to see how he’s feeling.  I’m always concerned with all our guys, but he’s fine.”

Garrett’s first severe crisis with sickle cell came when he was 12 years old.  At a summer basketball camp at the University of Iowa where his father coached at the time, Garrett got overheated and it ended up requiring a blood transfusion to his spleen.  The crisis, Garrett said, was a “great learning experience” for him to figure what triggers an attack.

Garrett isn’t the only one who has had to make adjustments. DePaul head trainer Jeff Carrico has spent hours of researching sickle cell, putting together PowerPoint slides to now knowing the right hospitals to take Garrett to in case of a crisis on the road. At practices, Carrico always has a water bottle in hand to make sure Garrett stays hydrated in between drills.

Carrico said he is and isn’t surprised that Garrett has been able to play at such a high competitive level with the disease.

“He’s a very mature sophomore,” Carrico said. “He’s better at communicating when he starts to feel something. To have this disease, it takes a lot of preparation and knowing what you have to do. The main message from our doctors and me to him is to hydrate, hydrate, hydrate.”

Garrett said he is better at recognizing what he has to do to handle a crisis. His most recent episode was a month ago, but he said it was less severe than the others. Garrett rested two days, took fluids and medication before he was back to practice.

Even though he’s always on watch, Garrett said he isn’t worried about having another crisis.

“College is more strenuous, so I have to take care of my body,” Garrett said. “Basketball was the most important thing for me. In order for me to succeed as a basketball player, I can’t do that without letting them know what’s going on.”