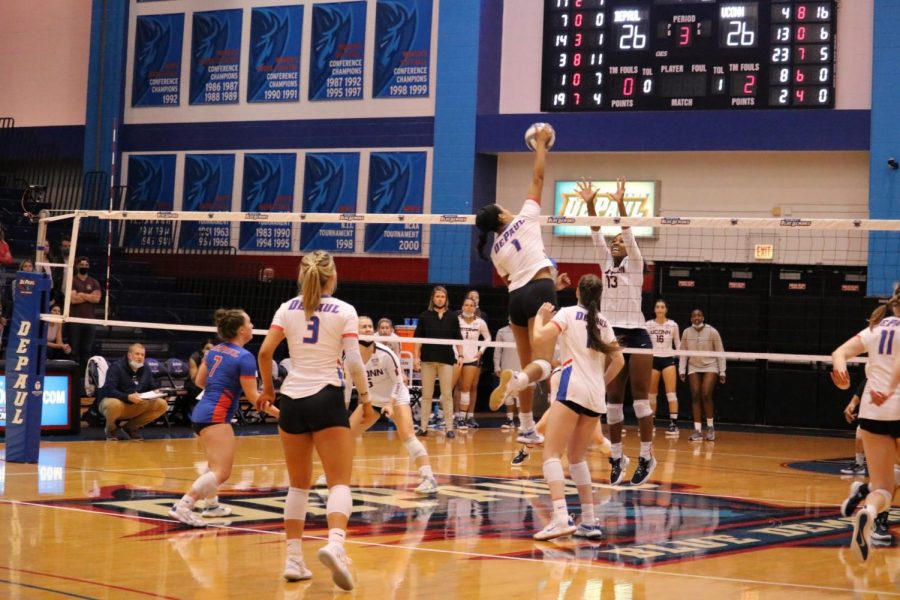 Brown going for a kill against UConn at McGrath-Phillips Arena.

When Donna Brown approaches the volleyball net for a hit, the team on the other side has mere seconds to prepare before her 6’2” frame is leaping in the air to connect with the ball to complete the hit. And with 684 career kills, she often finds success.

A senior and middle blocker on the DePaul volleyball team, Brown has spent all four years of her collegiate career as a Blue Demon.

However, while volleyball plays a large role in her life today, it was not the sport she had intended to play growing up.

A native of Galloway, Ohio, Brown’s athletic life centered around soccer and basketball. She never considered playing volleyball until her god-sister suggested she give volleyball a try because of her tall height.

Therefore, Brown began playing for club teams in her freshman year of high school, became serious about volleyball and found her way to DePaul in 2018.

However, volleyball wasn’t what originally drew Brown to DePaul. She originally visited Chicago for an orchestra trip and fell in love with the city, so she visited DePaul and loved the diversity across the school.

Brown joined the Blue Demons her freshman year and made an immediate impact. She played in 98 sets and finished with 173 kills — placing her in third on the team — and 47 blocks.

Head coach Marie Zidek, who has been Brown’s coach for her entire DePaul career, saw Brown come in as a freshman and was impressed with how Brown began her collegiate career.

“She came in right away as a freshman and had to play right away,” Zidek said. “We had to win by committee, so she had to come in and not just play, but be an impact player right away. Obviously, everybody wants to play until they get in a 30-match season, and they realize how hard it is to play at this level, and so I think Donna’s done a nice job leveling up.”

Brown’s impact did now slow down after her freshman year. In the 2019 season, she played in all 30 games and totaled 250 kills, 101 blocks and 67 block assists.

In the 2020 season, which was shortened due to Covid, she had 72 kills, 48 blocks, which placed her in seventh in the Big East conference, and 33 block assists in all 45 sets.

“She’s able to bring such a tenacious level of volleyball but at the same time she jokes around with the younger players and makes everyone feel welcome,” Zidek said. “She’s really just turned into that total athlete, total student-athlete that you need, that you build your program around.”

While she has has success on the court, the moments with her teammates over the years are what she considers to be her favorite memories.

“It’s been really great to see her grow over the years,” graduate student and right-side hitter Emma Price said. “She has transformed into such a powerful player and such a leader on the court that it’s been fun to watch her fill the shoes as she’s grown up and take over.”

However, with volleyball a central part of her life, Brown found it hard to keep that from consuming her entire identity, and she considers that her biggest challenge. But she was able to overcome that when she realized there is more to her than just that and fell in love with playing volleyball all over again.

Now in her fourth year, Brown has 189 kills, 85 blocks and 67 block assists in 87 games, and is looking to enjoy her senior year while helping the Blue Demons make a push for the playoffs.

“My faith is really important to me, so focusing on my faith and with that, I found so much freedom in playing,” Brown said. “Especially this year, this is probably the year I’ve played with the most freedom and just enjoying every single moment.”