‘These last two weeks have just been like a whirlwind:’ DePaul gets ready to honor Allie Quigley 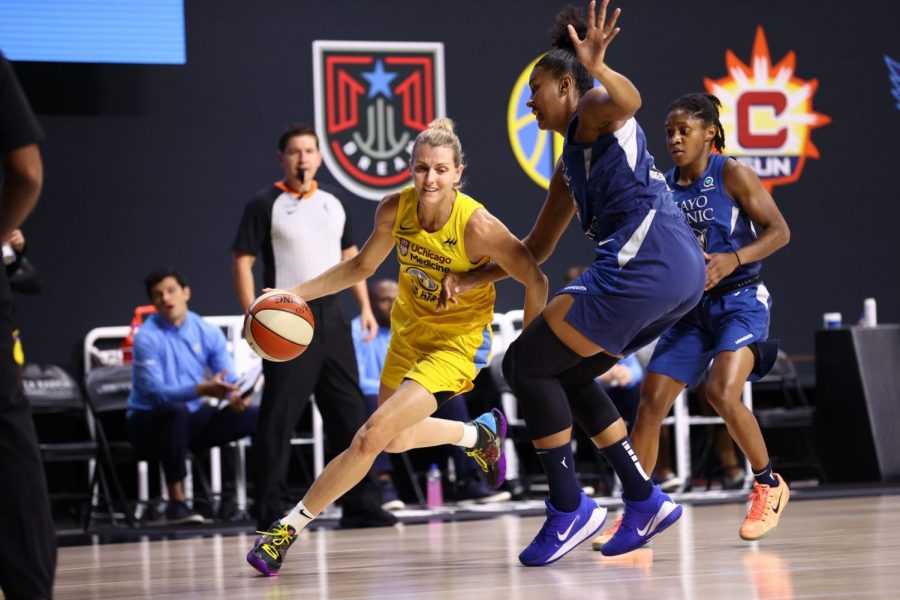 Basketball has always been a part of Allie Quigley’s life. She first made her name at Joliet Catholic Academy as an All-American, then became a four-year starter at DePaul and has recently reached the peak of her professional career — winning the 2021 WNBA championship with the Chicago Sky.

But Quigley’s journey from a star in high school to a key member of the Sky’s first championship has been filled with plenty of ups and downs. Before signing with her hometown team in 2013, the 5-foot-10 guard was cut by four teams from 2008-11.

Through those early moments of Quigley’s professional career, she always had at least one person believing in her — DePaul women’s basketball head coach Doug Bruno.

“I can remember almost every other day in training camp my first season with Seattle, and [Bruno] calling me every other day, asking me how it was, just to stay positive,” Quigley told reporters via Zoom on Monday. “So I just feel like in those beginning years when I just never felt good enough, he always reminded me that you belong.”

Eventually, Quigley proved that she did belong in the WNBA. She signed a contract with the Sky in 2013, and has been a key member of the franchise since then. Throughout her Sky career, Quigley became known as an elite 3-point shooter — and it was on full display in the finals-clinching win over the Phoenix Mercury with 26 points and five 3-pointers.

“She’s fearless of the big moment and she will take the big shot, but she’s also a great passer and helps her teammates get better,” Bruno said. “It’s been a blessing and a joy to coach Allie at DePaul, and it’s been a joy to watch Allie fight through the adversity she fought through to make the league.”

On Tuesday, Quigley returns to Wintrust Arena where she will get honored by her alma mater before the Blue Demons play Texas Southern.

“Obviously, these last two weeks have just been like a whirlwind,” she said. “Just having your dream come true, and then being able to come back to the same floor and be able to celebrate DePaul’s opening night and then our championship on the same floor, I couldn’t write it any better.”

The four years that Quigley spent at DePaul was more than just winning a bunch of games and climbing up the history ladder. She talked about learning valuable lessons from Bruno that have helped her throughout all the ups and downs she has experienced.

“If you are close to the program, you know we constantly say, ‘Make adversity your best friend,’ and just little quotes and things like that, that we talked about every single day in our locker room,” Quigley said. “We have the 10 we-wills that we recite. … So, just to have those positive things to be told to you every single day.”

Overcoming the adversity that Quigley experienced in the early parts of her career have helped shape who she is today. Her story of overcoming the odds of becoming a professional athlete, and then making a name for herself, is also inspiring to a younger generation — most notably, DePaul guard Lexi Held.

“She definitely has paved the way,” Held said. “She’s talked about a lot, not only because [the Sky] won this year, but because she is kind of a legend at DePaul. So, it’s pretty inspiring to see someone like me is able to play at the next level if you put the work in.”

At 35 years old, Quigley is still working on her craft as if she is just starting her career. Part of that is still playing overseas during the WNBA offseason. Following the championship with the Sky, Quigley was on a plane a week later to Russia because her team — UMMC Ekaterinburg — needed her for a couple of games.

In about a week, she is back off to Russia again.

“I’m just going to go back to Russia, probably in a week or so, and just continue to grind, continue to get better and win over there,” she said.