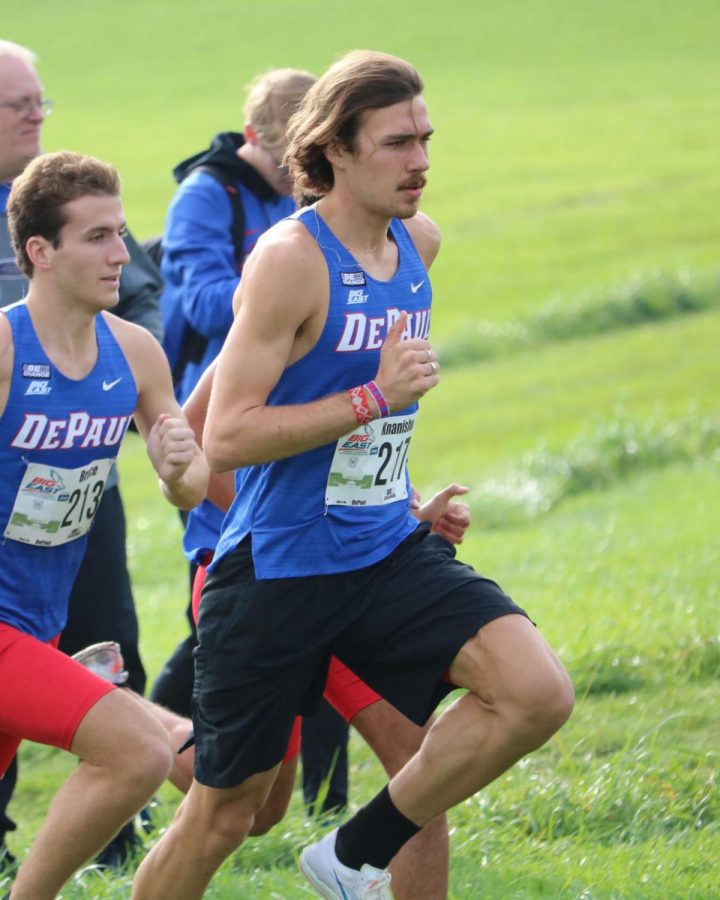 While the brothers discovered their love of running on their own, Shane and Joe Knanishu have found their way to the DePaul cross-country and track and field teams together and have enjoyed every minute.

From Batavia, Illinois, Shane and Joe are not too far from home and their other brother, who attends the University of Wisconsin, but having each other at DePaul is something that they value greatly.

“It’s an achievement that I can come out here and run every day with my brother,” Joe said. “And we can do better than we did in high school — because we obviously ran together in high school — and that was a fun experience, so just being able to build on that is really great.”

Now a senior, Shane joined the team in fall of 2018 as a freshman. He first got into running through his friends in the summer before his sixth-grade year while looking for a sport to participate in. He fell in love with running and stuck with it.

His younger brother Joe joined Shane at DePaul two years later in 2020. Now a sophomore, Joe began to run in fifth grade with friends in a running club at his school, but he initially hated the sport. However, he continued to run with his best friend and eventually found a passion for it.

Like running, Joe also hated the city of Chicago when he first visited as a junior in high school. However, as he continued to visit the city and Shane at DePaul, his mindset began to change.

“I hated the city so much and I was like, ‘I’m not going to DePaul,’ like, I couldn’t imagine living in Chicago,” Joe said. “And then, in my senior year, I started coming out here a lot more and it grew on me, it grew on me a lot and I really, really love the city.”

The location is what first drew Shane to DePaul, and from there, he liked what DePaul had to offer, such as the small class sizes and hands-on learning. He was thrilled to have his younger brother join him on campus.

“I remember being a sophomore in college and getting excited that my brother was interested in DePaul,” Shane said. “We had an enjoyable high school experience, so to build upon that and build upon our relationship and our successes as teammates is what really excited me.”

In his freshman year, Shane finished 55th in the 8K race at the Big East Cross-Country Championships with a time of 26:45.6 and was the fourth Blue Demon to cross the finish line. With the track and field team, he placed first in the 1500m at the 2019 DePaul University Invitational.

At the 2021 Big East Cross-Country Championships on Oct. 29, Shane was the second Blue Demon to cross the finish line in 35th place overall with a time of 26:04.5.

Joe’s freshman seasons for both sports were disrupted by Covid-19. The cross-country season was moved from the fall to early spring of 2021 and the team only competed in two races.

“It’s been a great experience running with Shane and Joe,” DePaul teammate Dominic Bruce said. “Every single day, whether it’s at practice, lifting or just hanging out, they both have a contagious positive energy, it’s impossible to not enjoy spending time with them.”

The Blue Demons placed fifth at the Big East Championships — the team’s highest placing since they began competing in the conference. Helping the team achieve that together is one of the brothers’ favorite memories from the season.

“That’s a feat that no one has ever accomplished, so being able to do that with my brother was really exciting,” Joe said.

The brothers have stayed close at DePaul. They live near each other, hang out together and it carries over into the way they are with the team.

“The thing about Shane and Joe is that they treat the rest of the team like we’re their brothers as well,” Bruce said. “And I think that it leads to one of the greatest team dynamics possible and one that I’m proud to be a part of with them.”

In the year-and-a-half that Shane and Joe have been together at DePaul, they have enjoyed each other’s presence, both on the team and on campus. It’s something that means the world to both of them.

“To have someone so close to home, like really close to me, that provides a sense of family in this area that I’m at,” Shane said. “I’m really appreciative of that.”