The issue with Katie Couric’s “Going There” tour 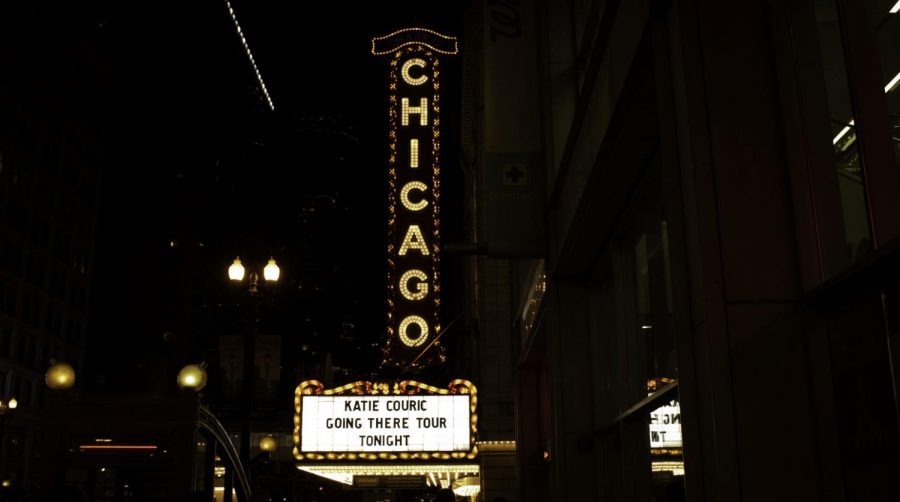 Katie Couric promoted her new book “Going There” at the Chicago Theatre on Nov. 6.

Like many young women in the journalism industry, I grew up listening to the news and one of the voices that I became accustomed to hearing every morning was Katie Couric’s. At the time, I didn’t know I wanted to be a journalist, but women like Katie Couric represented a potential for me to pursue that once I grew up. This past week, I got the opportunity to see Couric live for her book tour for “Going There” and found myself disappointed in her ability to talk about tough issues in a way that felt empathetic to the people and issues she was discussing.

Now, 11 years later, sitting in The Chicago Theatre, my enthusiasm to hear her discuss her new book dropped like a weight to my feet. In her latest book, Couric writes about her life throughout her years as a journalist and online TV woman but the event, at best, felt out of touch. From NBC to the Today Show, Katie Couric has been in our living rooms reporting on topics ranging from presidential interviews to Harry Potter books. While she may have made our mothers laugh, when she came to Chicago, she left a sour taste in my mouth. It felt obscene and insensitive as she right off the bat joked about her eating disorder before moving swiftly to gun violence in Chicago.

Throughout the show, I had to keep checking that I wasn’t the only one astonished with her aloof behavior towards extremely traumatic topics, but to my surprise, everyone was laughing along. Off-putting jokes combined with random sound effects blaring through the theater came off as trying too hard to be likable, but maybe I just didn’t fit her desired demographic as a college student.

Continuing her life story, she brings up her “mission” to find a husband.

“Be intentional: approach finding a husband with the same rigor as you would a career,” Couric said. This sentiment seemed to say that finding love was something to check off a to-do list for the perfect life. While this is a common idea for some people I never liked the idea of finding love and getting married as a requirement to becoming a complete woman.

Moving on from her build-a-husband, Couric introduced a couple who she did a story on in the beginning of her career. The couple, Pamela and Tom Bosely, are parents of Terrel Bosely who was murdered in 2006 in front of Lights of Zion Church. She brought them on to speak about their loss and how they have overcome it by helping others in similar situations. But it came off as collecting their trauma as a stepping stone for her career rather than bringing awareness to an important issue. She sped past their mention of community groups and fundraisers and, instead of projecting the specific groups to help bring awareness on the screen, photos of herself phased in and out.

After they share their trauma and inform the crowds of how to help, Couric asks why gun violence hasn’t gotten better as if this family has the answers to such a difficult question. The off-color comment along with appropriating pain felt extremely targeted and ruined any level of respect I had left. Right after the family leaves, she just continues on with her life story in a transition that felt tone-deaf to the previous interview.

As if the night couldn’t get any worse, the topic of Matt Lauer arises, and the #MeToo movement alongside it. Couric’s explanation of the events that transpired with her partner on NBC News after Lauer was fired for inappropriate sexual behavior sounded more like a casual misunderstanding than a traumatic experience for many young women. She calls the men who got fired from their jobs for sexual misconduct “casualties” as if sexual predators are victims in war. In her book, Couric asks, “Why didn’t these women just tell Matt to take a hike?”

“I realized,” she adds, “not everyone is built for that kind of confrontation.”

I was disgusted to hear someone I used to look up to articulate an assumption that women should be responsible for men’s behavior. Katie Couric’s “Going There” book tour disappointed me, and ended my admiration for one of America’s favorite TV journalists.