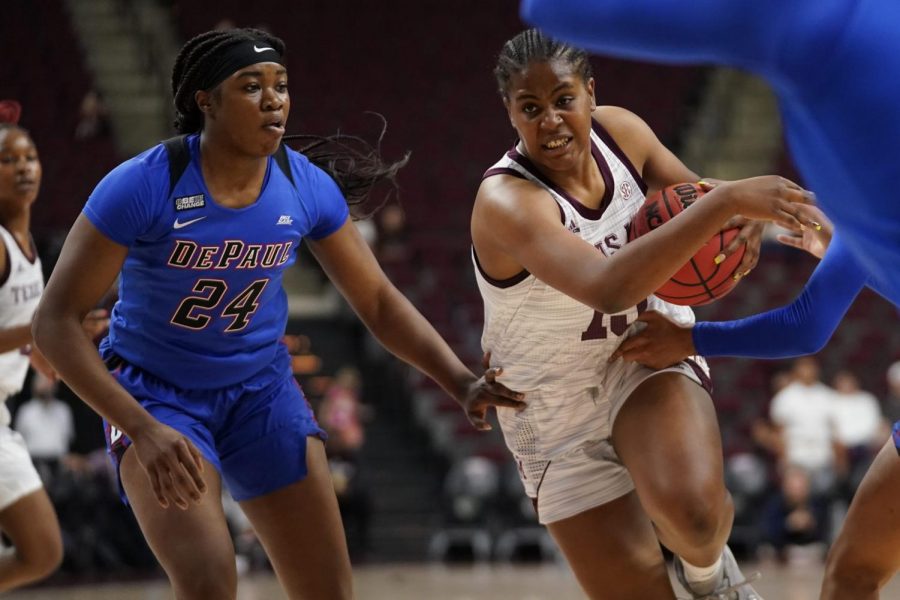 DePaul has had a relatively comfortable start to the 2021-22 college basketball season, winning its first two games by a combined margin of 77 points. But the test got harder on Monday when the Blue Demons went on the road to face No. 24 Texas A&M.

DePaul’s defense struggled to adjust to a tougher opponent, leading to a double-digit loss for the Blue Demons, 95-75.

These two programs have had a couple of close battles in the last three years, with the last two meetings being settled by only three points. In 2019, the Aggies won 80-79 in the second round of the NCAA Tournament. Last season, DePaul’s fourth quarter comeback fell short by two points, 93-91.

On Monday, however, it was a different story. There would be no close calls in the final few seconds of the game. Texas A&M dominated from start to finish.

The Aggies started the game by connecting on their first three shots. DePaul’s offense managed to keep it close early, but a five-minute stretch with only two points allowed Texas A&M to build an eight-point lead.

Pretty much what Texas A&M wanted to get on the offensive end it was able to get. In the first quarter, the Aggies shot 55 percent from the field. DePaul, on the other hand, only made six shots in the opening quarter.

It was a similar story in the second quarter, but this time the Aggies were able to increase their lead even more. They were led by Jordan Nixon, who scored 12 points in the quarter.

DePaul’s defense did a little better job of limiting the easy shots that the home side was getting, but that didn’t stop Texas A&M from taking a 48-37 lead into the break. Freshman forward Aneesah Morrow was the only Blue Demon who provided any sort of defensive help in the first half, blocking five shots.

Things went from bad to worse in the third quarter, however. There was a glimmer of hope for DePaul to begin the second half with the Aggies only scoring four points in the first three minutes. The Blue Demons, though, failed to take advantage of the opportunity by only scoring two points in that same stretch.

But the cold streak wouldn’t continue for Texas A&M. It began to score again at a high-level, building its lead to 20 and more points. DePaul did not make any more shots in the final 3:14 of the quarter, allowing the Aggies to take a 78-53 lead.

DePaul did manage to win the fourth quarter, but it only meant that the final score was a little bit nicer to the visitors. All five starters — Darrione Rogers, Lexi Held, Deja Church, Aneesah Morrow and Sonya Morris — finished in double figures. The problem, however, is that head coach Doug Bruno got no points from his bench.

The Blue Demons will get six days off before returning to action against Northwestern at Wintrust Arena on Sunday.