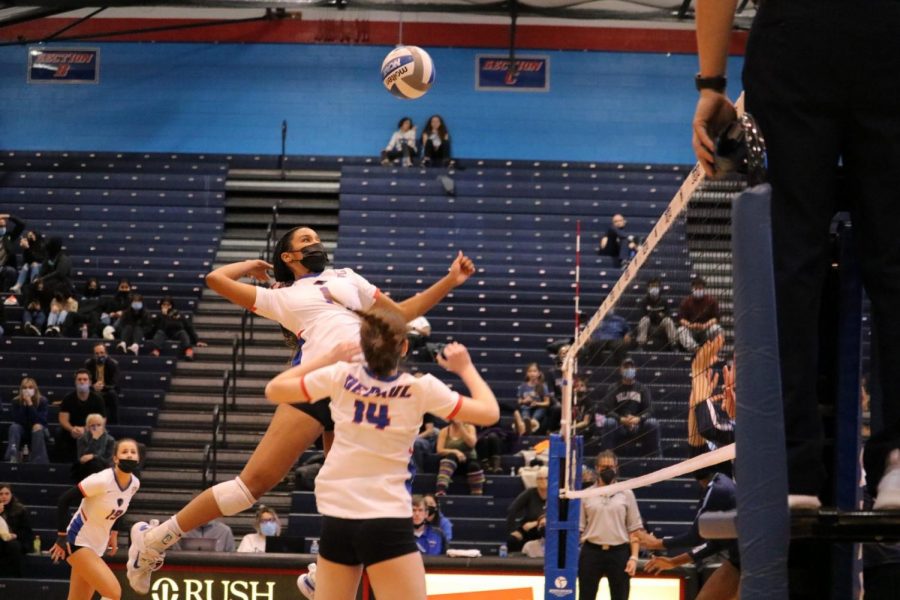 The DePaul volleyball team defeated Villanova University in a tight 3-2 match at home on Friday for their fifth-straight win.

The Blue Demons were coming off a 3-1 win over Xavier University on Nov. 14 that had secured the team a spot in the Big East Tournament.

The team had a few players out with Covid issues, so the lineup looked a bit different as players had to adjust to new positions.

“We had some last-minute adjustments to today’s lineup and for the team to still persevere with people playing out of position and in different rotations; we just played volleyball and I’m just so proud of all the adversity that this group had to overcome today,” head coach Marie Zidek said.

“I mean, after five years, it feels like a long time coming, and honestly kind of feels unreal that I’m at that point in my career and I finally got a thousand kills,” Price said. “So, it’s just very validating to be rewarded for that.”

While Price got the first kill of the game, Villanova dominated early, and the Blue Demons found themselves trailing in set one.

However, strong offense by the Blue Demons and mistakes by the Wildcats allowed DePaul to tie the game and then take the lead.

The Blue Demons kept that lead for the next seven points before Villanova began to challenge by winning four straight points to minimize the Blue Demons’ lead to one and make the score 13-12.

DePaul was able to hold off the Wildcats with strong offense from Price and outside hitter Hanna Karl, but Villanova responded with strong offensive attacks of their own that the Blue Demons could not defend against.

Late in the first set, the Wildcats tied with the Blue Demons 20-20 and then took the lead. Villanova maintained that lead for the rest of the set and defeated DePaul 25-22 in set one.

The Blue Demons controlled the game early in set two, but Villanova responded with kills and pulled within two points of DePaul.

The offense for DePaul, led by Price and middle blocker Donna Brown, remained strong and the team pulled ahead 17-11.

Attack and service errors by Villanova allowed DePaul to pull ahead by 13 points. The Blue Demons continued to dominate and defeated the Wildcats in set two by a score of 25-11.

Set three began as a back-and-forth battle, but Villanova gained momentum with kills that the Blue Demons could not return, and DePaul found themselves trailing 12-6.

Three video challenges by Villanova that were all awarded to the Wildcats continued to set the Blue Demons back. DePaul also had eight attack errors in the set, while Villanova had none.

The Wildcats continued to dominate offensively, while DePaul struggled to get their offense on the same level, and Villanova won set three over the Blue Demons 25-20.

Multiple kills by Brown, and outside hitters Jill Pressly and Hanna Karl ensured that the Blue Demons maintained their six-point lead late in the set. The Blue Demons won the set 25-18, forcing a game-deciding fifth set.

The fifth set was tight from beginning to end, with neither team having more than a three-point lead. Every time one team pulled ahead, the other caught right back up.

Down the end of the stretch, blocks by Karl and pin hitter Bailey Nelson helped the Blue Demons pull ahead. However, when it seemed like the Blue Demons had won the set, Villanova challenged and won the point, therefore tying the game at 14.

Following the fourth coaches challenge that went Villanova’s way, DePaul earned a point after a service error by the Wildcats. With one point needed to win the game, a kill by Pressly secured the Blue Demons’ 16-14 win in the fifth set.

Price and Karl finished the game with 15 kills, while Pressly had 13 and Brown had 11. Libero Rachel Krasowski had 17 digs. Murrihy had a season-high 52 assists.

While this win over Villanova was one the team is proud of, the Blue Demons know what they need to focus on when they take on Georgetown University tomorrow night.

“I think that we just need to play our game,” Murrihy said. “I think in the two sets that we lost, we just kind of were not super confident in ourselves and I think that tomorrow, if we just play our game and kind of focus on ourselves more than the other team, we will be fine.”

The game against Georgetown is DePaul’s final game of the regular season. After, the team will travel to Milwaukee for the Big East Tournament on Nov. 26 and 27.