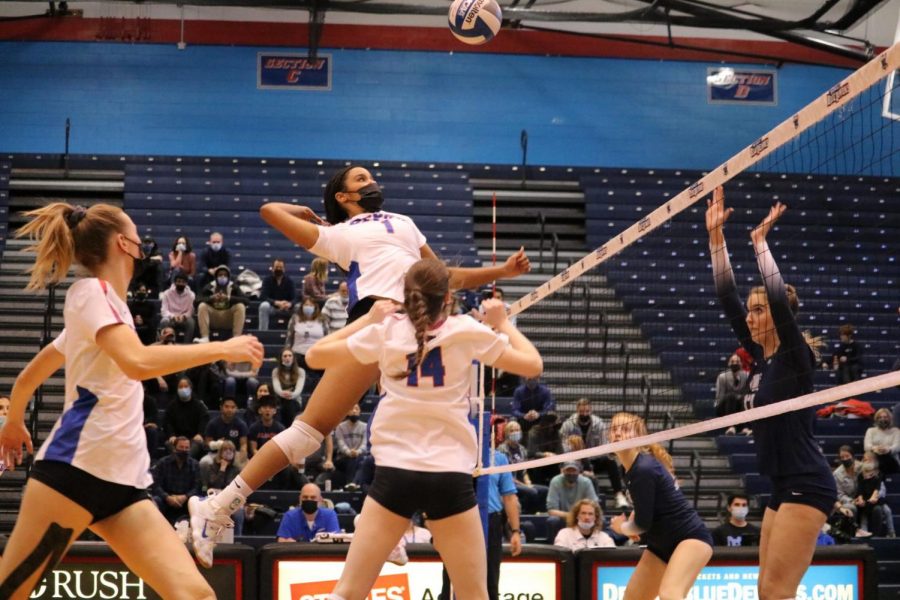 Head coach Marie Zidek, along with assistant coaches Erin Higgins and Nick Vogel, helped the team to a regular season conference record of 12-6 and the Blue Demons’ first appearance at the Big East Tournament in program history.

In her fourth year in the role, Zidek and the team overcame many obstacles, including Covid issues that affected the lineup in the last two games of the season. However, she and the Blue Demons were able to overcome them, and work their way towards the Big East Tournament, which they clinched in a 3-1 win over Xavier University on Nov. 14.

Brown, who has been with the Blue Demons for all four years of her career, was named to the All-Big East team for the second time in her career. She finished the season with 239 kills, 20 blocks and 82 block assists.

Pressly led the team in kills over the season and finished with 351 kills in her career. She had a season-high 24 kills against the University of Pennsylvania on Nov. 11 at the DePaul Invitational. She had six blocks and 28 block assists.

Price, who transferred to DePaul in 2018 for her sophomore year, elected to return to DePaul for a fifth year as a graduate student and has been strong on the right side. She totaled 271 kills over the season, including a season-high 15 kills against Xavier on Nov. 14 and Villanova University on Nov. 19. She also had four blocks and 37 block assists.

She was honored for reaching 1,000 kills in her career against St. John’s University on Nov. 5.

Sophomore outside hitter Hanna Karl was also named to the Big East Weekly Honor Roll for the second week in a row. She had a 16 kills against Butler University on Nov. 12, before having a season-high 18 kills against Xavier two days later. She followed that up with 15 kills against Villanova on Nov. 19.

The Blue Demons capped off their regular season with a 3-0 win over Georgetown University on Nov. 20. DePaul will play Creighton University, the No. 1 seed, at the Big East Tournament in Milwaukee on Nov. 26 in the semifinals. The finals are on Nov. 27.