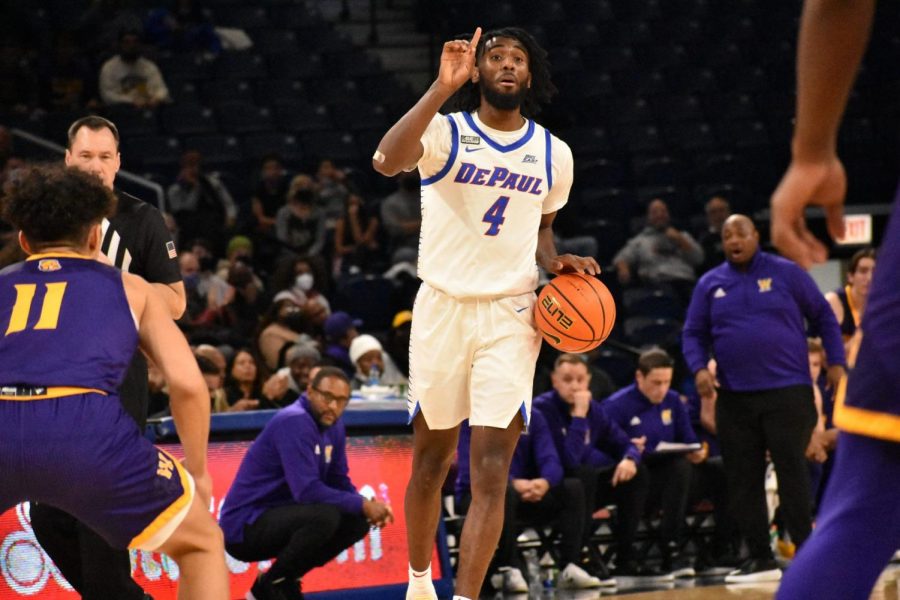 DePaul senior guard Javon Freeman-Liberty calls out a play during the Blue Demons' win over Western Illinois on Saturday.

DePaul has had issues beginning games this season. Head coach Tony Stubblefield has even acknowledged that he needs to do a better job of getting his team ready to play.

Well, whatever Stubblefield told his team between last Saturday’s game against Western Illinois and Friday’s game versus Northern Kentucky worked. The Blue Demons played their best first half of the season: shooting 50 percent from the field, limiting Northern Kentucky to only eight made shots and taking a 39-30 lead into halftime.

The strong first 20 minutes propelled DePaul to its fifth straight win to begin the season, defeating Northern Kentucky 77-68 on Max Strus night. Strus, who is now playing with the Miami Heat in the NBA, returned to Wintrust Arena to get honored by the school he spent two seasons playing for.

“[I] thought our guys did a much better job being locked in defensively, getting stops, following the scouting report and following the game plan from a defensive standpoint,” Stubblefield said.

Prior to Friday’s victory, the Blue Demons’ largest halftime lead has been four points this season. But DePaul has managed to go up a couple of gears in the second halves of games to stay unbeaten through four games.

Stubblefield has wanted to see his team put together a more complete performance over the course of 40 minutes — and he got that on Friday.

“I just think they [the players] were more locked in on the scouting report and what we needed to get done on the defensive end,” he said on Friday.

A big reason as to some of the slow starts this season, in particular against Western Illinois, is the fact that the Blue Demons were really only playing with seven players for the first four games. Tyon Grant-Foster has been out since the first game with a medical situation, and Jalen Terry, Ahamad Bynum and Javon Johnson weren’t eligible to play.

Terry finally got cleared by the NCAA on Thursday, allowing him to make his debut on Friday. He quickly made his impact felt by providing back-to-back assists when he checked into the game in the first half.

Terry, a transfer from Oregon, finished the game with five points and four assists in 17 minutes of playing time.

“He gives us, obviously, another player for the rotation, so some depth that really helped from that standpoint,” Stubblefield said on what Terry brings to the team. “I think he can really guard the ball well from a defensive standpoint to kind of change the game. His quickness, being able to break the defense down, make plays and I think his familiarity with me in what I want done from an offensive and defensive standpoint.”

Northern Kentucky and DePaul traded baskets during the first 11 minutes of the first half. The visitors held multiple leads in the early parts of the game, but the Blue Demons began to pull away in the final nine minute of the half.

DePaul outscored Northern Kentucky 19-9 in that stretch to take a 39-30 lead into halftime. The Norse’s only made one shot in the final nine minutes, with the Blue Demons playing much tighter defense to close the half.

Senior guard Javon Freeman-Liberty led the way with 15 points and 10 rebounds. He finished the game by adding five points and two rebounds in the second half.

Northern Kentucky came out with a zone in the first half, a look that DePaul hasn’t seen much of during the early parts of the season. Instead of trying to beat the zone by taking long-range shots, DePaul looked to get to the teeth of the zone. The Blue Demons finished the game with 46 points inside the paint.

Stubblefield also said he was pleased to see his team finish with 14 assists and share the ball to beat the zone.

DePaul carried over its strong play from the end of the first half into the second half. Junior forward Nick Ongenda put together a dominant display in the second half, scoring nine points and blocking two shots.

“Our coaches — Stubbs and all the assistants — they always give us confidence, and I feel like that carries over a lot to the games,” Ongenda said. “Especially during practice, I feel like they are really pushing us to be the greatest us we can be.

DePaul’s largest lead of the game came with 5:37 left to play with Freeman-Liberty putting his team up 73-54.

Stubblefield got contributions from most of his players on Friday, with four players finishing in double figures: Freeman-Liberty, Ongenda, David Jones and Brandon Johnson.

Northern Kentucky closed the game on a 8-0 run to make the final score a little bit more pleasing for the visitors.