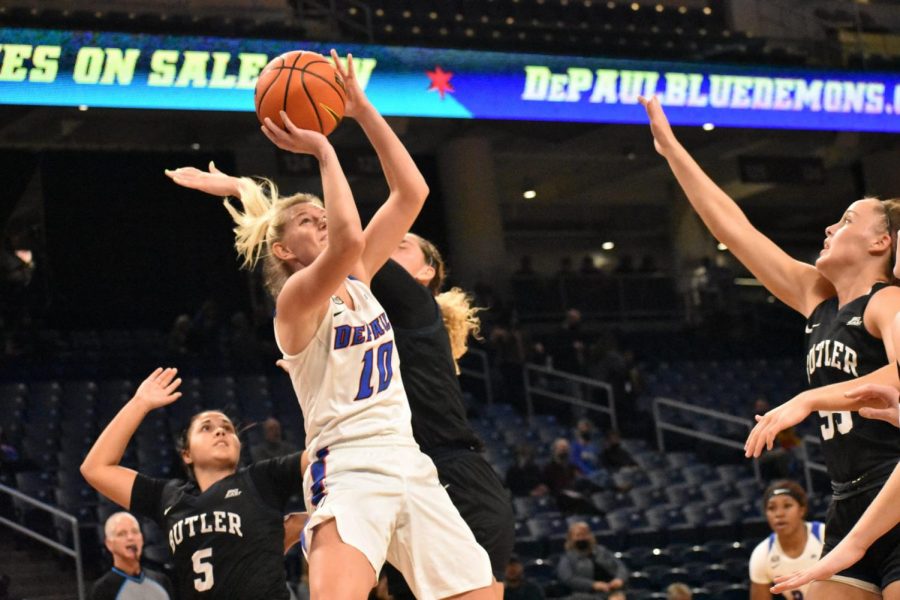 Lightning strikes quick, and so does “DePaulball.” After struggling through a lethargic first quarter for both teams, the Blue Demons took over in the second quarter to the tune of a 33-11 run through the ten minutes. Eventually, the Blue Demons cruised to a 101-64 over the 0-7 Bulldogs to open Big East play with a bang.

In the first quarter, Butler found a lot of success inside. Freshman Alex Richard scored eight points early, scoring inside with not a lot of pushback. DePaul to their credit was getting the shots they wanted, yet it felt like there was a lid on the hoop. Both teams combined for 14 turnovers in the first five minutes of the game. DePaul lead 17-16 at the end of the first.

In the chaos, however, DePaul thrives. The second quarter was a clinic from DePaul on getting steals and turnovers and finding open shots out of transition. In an old-fashioned shootout, both teams shot nine threes in the second quarter. DePaul hit 5 and Butler hit 1, which was only part of the difference between both teams. DePaul overall shot 60 percent from the field, and limited turnovers while Butler started giving up even more. By the end of the quarter, DePaul was up 50-27.

“I think that’s another big thing that kind of got us going after the first quarter was our defense,” Held said. “And we love the open court, we share the ball well, and when that gets going everything else just kind of falls into place.”

Graduate student Deja Church scored 19 points to pace the Blue Demons, senior Lexi Held was right behind with 16. Kiera Collier came off the bench and went 3-for-3 from beyond the arc for a 14 point performance. The leading scoring duo Sonya Morris and Aneesah Morrow scored 10 and 13 respectively.

The starters came back out for the third quarter for DePaul. By the end, they had increased the lead by 10 as head coach Doug Bruno was able to reach into his bench and get some minutes for everyone. The Blue Demons played 12 players all over 7 minutes.

Eight different DePaul players recorded a steal in the game, lead by 4 from Morrow. It was a legitimate team effort from the Blue Demons that saw them dismantle Butler. It was the perfect start to a Big East season that has all the workings of a revenge tour for DePaul. Which is what made Butler a perfect first opponent.

Last March, DePaul lost at home in the last game of the season to a Butler team that was 2-17 going in, essentially sealing their fate of not making the NCAA tournament. So was there some extra oomph going into this game?

“I’d be lying if I said it wasn’t,” Church said. “Before the game it was more personal to everybody, so we just said let’s just go out here and play hard.”

DePaul lost four of their last five Big East games at the end of last season. This year, they know they have to beat every team to win the regular-season championship.

“Every game that we play kind of feels like revenge from last season, but this one kind of hit home a little more,” Church said.

DePaul turns their focus to Xavier on Sunday, who just lost in their first conference game, 76-48 against Marquette on Friday night.

“I do think [The Big East] is a really good league,” Bruno said. “There are some really good teams in here besides just UConn. So you really have to stay focused and be ready for each one of these.”