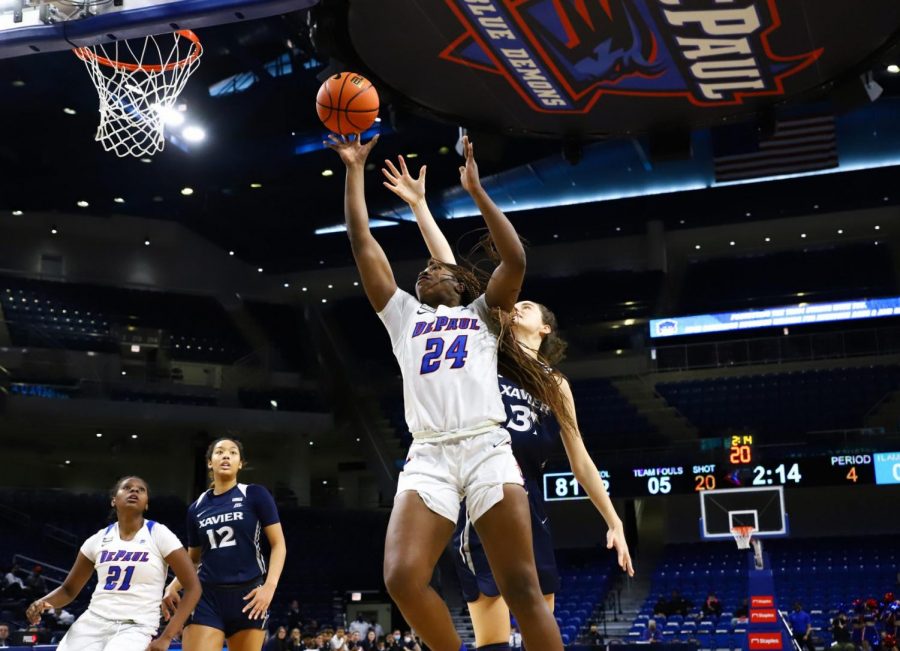 DePaul forward Aneesah Morrow jumping to shoot the ball in DePaul's win over Xavier on Dec. 5.

The DePaul Blue Demons came out to play in a dominant fashion as they now boast a 7-2 record, remaining undefeated in conference play with their 103-85 win against Xavier.

DePaul’s first half was a three point display. The first quarter opened up with sophomore guard Darrione Rogers setting the tone early thanks to a three-point shot, followed by freshman forward Aneesah Morrow’s “And 1” three-point play that gave the Blue Demons a quick 6-0 lead. Senior guard Lexi Held and graduate guard Deja Church joined the party and chipped in three three-pointers combined to contribute to the team’s 40 percent shooting from behind the arc.

At the end of the first half, the team finished with 20 second chance points as well as 16 points in the paint. Morrow led all scorers with 18 points. Rogers had not missed a shot from behind the arc, making five threes and contributing 16 points. Held and Church brought in six points each.

After a struggling first half, senior guard Sonya Morris showed signs of life with a couple quick buckets to start off the second half. Church joined the movement and contributed a bucket of her own to give the team a 59-43 lead. Xavier then came back with a 6-0 run of their own to cut DePaul’s lead to ten.

Held stopped Xavier’s run by scoring five points and Morris chipping in a three of her own, expanding DePaul’s lead to 16 with a 67-51 lead. Rogers continued her shooting spree by hitting three with 3:25 left in the third quarter, giving her 19 points and six made three pointers. Church hit a three under a minute left and Morris scored a layup with 20 seconds left to give the team a 81-63 lead at the end of the third quarter. Rogers was leading all scorers with 21 points, while Morrow was right behind with 20 points of her own.

The team started to pull away in the fourth quarter. Morrow started the quarter with a putback layup giving the team an 18-point lead. The team went on an 8-0 run to give the team a 90-65 lead. Church took over the quarter by chipping in eight points to help seal the deal in securing the win. Morrow finished the game with a 24 point, 19 rebound double-double. This is her fourth double-double in nine games, Rogers and Church both had 21 points while Held pitched while Held contributed 15 points.

The opening minutes of the game brought questions to the team’s readiness as DePaul looked lost defensively and had lapses throughout their full court pressure. Head coach Doug Bruno admits to seeing a trend of slow starts over the past few games, and believes that even though they talked about not letting that happen, Xavier had a change of plans in dictating the way his team played.

“[Slow starts] are really something we discussed and focused on not letting happen tonight, but I think a lot of it was Xavier taking it to us ,” Bruno said. “I think Xavier did a great job attacking us and exploiting us on the floor. They took it to us and I think that had alot to do with our slower start. We are definitely conscious of what is going on and we need to get off to better starts.”

Rogers had not been shooting her best these past couple games, but came out of her shooting slump, shooting 85 percent from the three. Rogers was excited that she is no longer in her slump, but was more excited being a facilitator on the court.

“I haven’t been shooting the best the last couple games, but through it all, my teammates and coaching staff haven’t lost confidence in me,” Rogers said. “To be able to make shots felt good but I was more excited with passing the ball. That felt just as good as making a shot.”

Rogers has a shooter’s mentality, demonstrating that even in shooting slumps she has the faith that she will eventually come out of her slump.

“I’m pretty confident in myself,” she said.  “It’s all about being patient and staying within the moments between each game.”

Morrow’s 19 rebounds are her career high within the young college career. She credits determination as a factor that helps her accomplish her strong play inside the paint.

Morrow has been dominant, but she still is learning the game. She admits that she has to learn to be patient in finishing around the basket and being a better defender.

“Sometimes I lose myself on defense and with me being a freshman everything is moving quicker,” Morrow said. “It is not an excuse, defense is the biggest thing that I need to work on.”

The Blue Demons play Kentucky next on Thursday, Dec. 9 at 6 p.m. CST in Lexington.