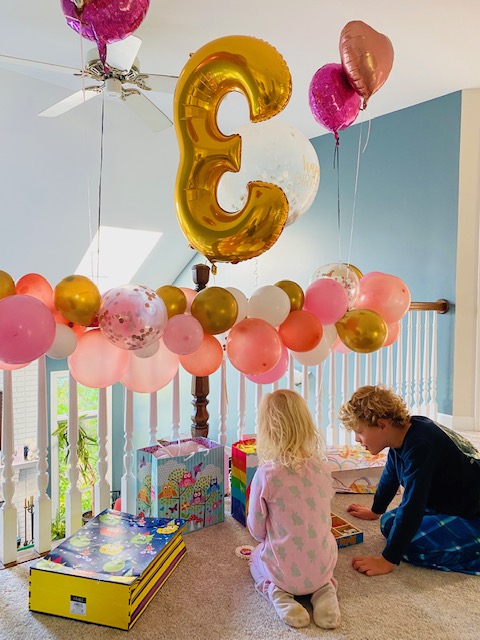 Lawler decorated her daughter's birthday party with balloons gifted from the Buy Nothing group, including a reused "three" balloon that would be passed around the group to help celebrate three different birthdays in total.

A used bike, a bag of clothes and a leftover burrito—each of these items was given a new life through a community Facebook group.

The Buy Nothing groups are home to what just might be the most positive interactions you can find on the social media platform. Their goal is to share resources in order promote sustainability and connect people with their neighbors.

“The purpose of it is very simple: give where you live and recycle and reuse,” said Aditi Chakraborty, the administrator of the Lakeview Buy Nothing group.

The rules are simple, too—members can post a “give” to offer up items they no longer use, an “ask” to request an item that someone else might be willing to part with, or a gratitude post to express thanks for what the community has done for them. Buy Nothing emphasizes using a gift economy, so there’s no money, no bartering, no expectations of something in return—just asks and gives.

People offer up typical items that show up in thrift stores, like furniture for new renters, clothes that would otherwise go unsold at Goodwill and neglected kitchen gadgets.

But people also give homemade cookies to share, skincare and makeup they tried but decided wasn’t for them, unused concert tickets and even a DoorDash burrito delivered to the wrong address. Everything is shared, and, if at all possible, nothing goes to waste.

The nonprofit located in Back of the Yards provides educational workshops, a farmer’s market, and guidance for small businesses to promote sustainability and a circular economy, where resources are reused in new ways instead of being turned into waste.

“Right now, the global economy in which we operate is a linear economy,” O’Malley said, “in which producers extract resources from the Earth…to create products like plastic water bottles or cheap clothes for consumers to use once or only a handful of times. By reusing…we play a part in preventing the extraction of those resources.”

O’Malley explained that besides diverting items from a landfill, reusing reduces the amount energy used to manufacturer new products and fights climate change by minimizing activities like deforestation and pollution. It even saves the emissions that would come from shipping these products. Instead, Buy Nothing members can simply walk to their neighbor’s place a few blocks over.

“The sustainability aspect is what gets me the most excited,” said Wendy Lawler, an avid member of the Lakeview Buy Nothing group.

Lawler joined the group during last year’s quarantine when neighbors were feeling more isolated than ever. Initially just looking for a place to pass down her kids’ outgrown clothing when donation centers were closed, she soon found herself immersed in an economy of kindness.

“I know it’s crazy,” she said, “but I swear it has worked time and again where I put out the things that I don’t need, and I get exactly what I do.”

Lawler tries to make a difference in sustainability in every small way she can. Besides making her own nut milk and starting a compost bin, she uses the group to reuse items whenever possible.

In Lawler’s biggest upcycling accomplishment, she’s taken the phrase “buy nothing” to a new level.

“As my daughter’s birthday was approaching,” she said, “I thought, is there a way that you could still exercise that same sustainability mindset while honoring the fanciful, whimsical, magical experience that is a birthday for a little kid.”

Another member sparked Lawler’s interest when they made a “give” post for giant three-zero mylar balloons, donating them after their thirtieth birthday party. Lawler used the “three” balloon for her daughter’s party along with other decor from Buy Nothing gives. She collected clothes, toys and games from both the Facebook group and local thrift stores. She even reused an edible arrangement she had received for her own birthday two days earlier for her daughter’s “cake”—putting the whole party together without buying anything brand new.

“It’s been fun to see that you can do sustainability in a way that is still magical and fun and wonderful,” Lawler said.

But the party didn’t end there.

Lawler said she’ll use the “zero” balloon from the original “thirty” for her son’s tenth birthday in a few weeks. A few days after her daughter’s party, she reused a pink bouquet of Buy Nothing balloons and brought them to the hospital to celebrate her mom’s last radiation treatment. And the “three” balloon found its third home at another three-year-old’s party, along with some costumes Lawler threw in as well after talking with the kid’s mom on Facebook Messenger.

In the Lakeview group, items go around and around, connecting people as they travel throughout the neighborhood.

Lawler’s partner will even search for broken items people are giving, replace any old parts, fix them up, and send them back into the group in brand new condition for someone else to use.

Climate change is a global issue, and with large corporations being the worst culprits, it can seem difficult to make a difference. But O’Malley thinks individual actions still have value and impact.

“With your individual behavior, you communicate your values to others,” she said. “There’s kind of this intangible value of creating a ripple effect.”

As part of Buy Nothing gives, it’s common for people to post updates on how they’re using the items that were given to them, sending pictures of how the gifts are doing in their new home.

“It’s fun to see where these things end up, and then it kind of perpetuates wanting to put more out there,” Lawler said.

In the Lakeview group, this sort of ripple effect has had visible results. Since Chakraborty volunteered to take over as the group’s admin in May of 2020, the group’s popularity has skyrocketed.

“Our group has grown tremendously since I joined,” she said.

The group now has over 5.3 thousand members. It’s even had to split several times because so many people continue to join, sprouting new groups in Lincoln Park, Ravenswood, and more.

“If you don’t have one in your own community, if someone’s interested, you can start one,” Lawler said. “I do think it makes the community stronger. I really love it.”