Venues across Chicago reopen after many months away 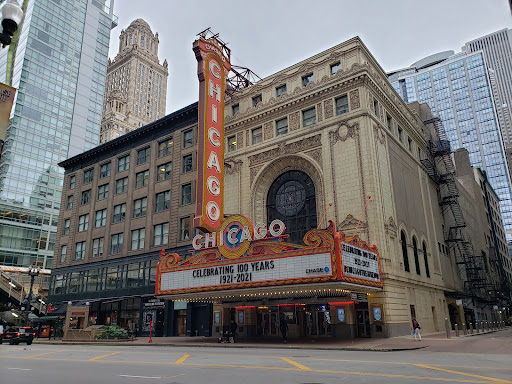 Chicago’s rich and bustling entertainment scene went silent after the initial COVID-19 lockdowns in March of 2020. In the name of community care and wellbeing, companies closed their doors to customers, making drastic changes to their way of business. Retailers and restaurants pivoted, turning to delivery and takeout options to comply with pandemic rules and limit COVID-19 spread.

Thus, movie theaters, performance venues and music halls went dark, closing their doors to live audiences out of an abundance of community care. The Lyric Opera canceled its 2020-2021 season, Broadway in Chicago “closed a consortium of over 60 performing arts venues” and the Chicago Theater celebrated its 100-year anniversary in October without any fans.

“I mean, there was a big change,” said Chris Jones, the chief theater critic for the Chicago Tribune. “An enormous amount of my job, prior to the pandemic, involved going to the theater and suddenly there was no theater to go to.”

During the theater shutdown, Jones shifted from reviewing productions to reporting on personal stories from individuals in the industry. He saw the weight the loss of live entertainment had not only on audiences but on performers as well.

“I pivoted much more to writing about the issues that were affecting people,” Jones said. “There was a lot of news made by closures and cancellations. Theaters had different approaches to keeping people employed and I wrote about the hardships that artists were facing. You had well-known performers delivering for DoorDash.”

This fall, over 18 months after the first closures, Jones has returned to his regular beat of live theater. Movie theaters, performance venues, concert halls and other live entertainment hubs across Chicago have begun to reopen with safety precautions in mind.

Chicago is currently in “Phase V” of reopening. The City’s goal in this phase is to protect vulnerable populations and “maintain safety until COVID-19 is contained.” The Chicago Department of Public Health recommends that live event attendees show proof of COVID-19 vaccination or provide a negative COVID-19 test taken no more than 72 hours before to the event start time. CDPH recommends masks be worn regardless of vaccination status.

According to Jones, most theater enthusiasts are more than willing to comply with these regulations.

“I think the vast majority of people going to the theater are vaccinated,” Jones said. “The audience that we think of for theater is overwhelmingly vaccinated. That I would say fairly authoritatively.”

Karina Miranda, a student at DePaul, was happy to comply with the COVID-19 guidelines to see Harry Styles at the United Center in September. Although she was excited to attend the show, she noticed that some members of the crowd were a little too excited for the return of live events.

“I felt like people were messier because they missed concerts,” Miranda said. “People were spilling drinks on each other and not respecting boundaries.”

In addition to health and safety, privacy and personal space are some of the benefits of staying home from live events. To mitigate these concerns, some venues are offering hybrid viewings of their live events.

The Lyric Opera of Chicago has offered patrons on-demand streams of each show  for “individuals who are not yet coming back to the full capacity theater, or who are unable to comply with Lyric’s audience vaccination policy.”

Even with streaming options, however, some audience members are more than ready to go out for in-person events.

According to the Courtney James, the Director of the Office of Student Involvement, 160 AMC theater movie tickets have been sold to DePaul students in the Lincoln Park campus this year through the Demon Discounts program.

Although she did not have the number of tickets sold in the Loop office, James estimated that across both campuses, the total amount of tickets purchased could reach over 320.

Jones is confident that after a long break from live theater and entertainment, audiences will be eager to get out of their homes and visit venues in person.

“Theater is not going to become a streamed entity because we already have that,” Jones said. “It’s called TV, you know?”