Women’s basketball: DePaul upsets No. 14 Kentucky on the road 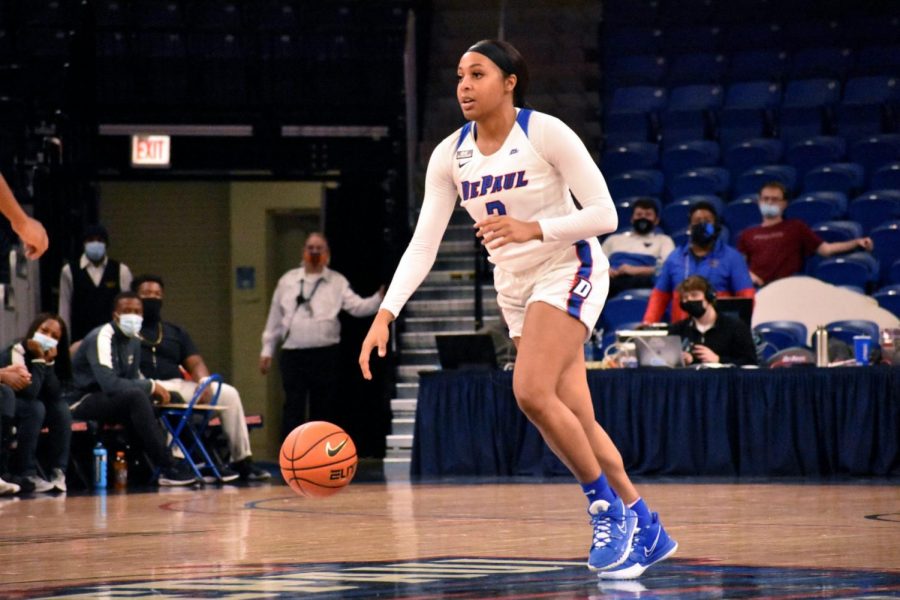 DePaul guard Deja Church dribbles up the ball during a Blue Demons game this season.

The DePaul women’s basketball team defeated No. 14 Kentucky on Thursday in a 94-85 victory on the road. The Blue Demons now have a record of 8-2.

Senior guard Lexi Held got the first basket of the game with a layup, but Kentucky pulled ahead early after multiple rebounds and layups by the Wildcats.

The Blue Demons challenged Kentucky’s lead with a three-point jumper by junior guard Kiera Collier and a layup by graduate student guard Deja Church to make the score 14-13 as DePaul trailed by a point.

DePaul then took the lead with a layup by Morrow. However, the points went back and forth before the Blue Demons pulled ahead with layups by Morrow and Church to make the score 24-20.

The first quarter finished with the Blue Demons leading by two points over Kentucky with a score of 24-22.

Kentucky controlled the beginning of the second quarter and took a 30-26 lead. Points went back and forth after that as both teams challenged each other for the lead.

However, DePaul pulled ahead again with a layup by senior guard Sonya Morris and two free throws by Rogers to make the score 39-38.

After that, more than a minute passed before a basket was made as both teams had multiple fouls until Collier made two free throws to add to DePaul’s lead.

The Wildcats challenged back but a sneaky layup by graduate student guard Dee Bekelja around a Kentucky player gave DePaul a three-point lead.

Morrow finished the first half leading the Blue Demons with 12 points and nine rebounds, while Rogers followed with eight points and three rebounds.

Kentucky came out flying at the start of the third quarter as the Wildcats tied up the game and then took the lead, but the Blue Demons bounced right back and scored ten-straight points to take a 58-50 lead.

While Kentucky made a few free throws, the Blue Demons pulled ahead more to take a nine-point lead. However, the Wildcats scored the next three baskets before a jumper by Morris broke up that streak.

DePaul continued to dominate in the three-point category with jumpers from Rogers and Morris and the Blue Demons finished the third quarter leading by eight points with a score of 73-65.

The points went back and forth at the start of the fourth quarter but the Blue Demons remained in the lead. However, halfway through the quarter, Held fell on her ankle and appeared to be in pain, but she walked off the court and came back into the game moments later.

The Blue Demons took a 12-point lead late in the quarter off a layup by Church. DePaul held onto that lead as the quarter ended and finished the game with a nine-point win.

The Blue Demons were 7-for-22 in three-point shots, while the Wildcats were not able to net a three-pointer all game. Additionally, DePaul led in rebounds with 46 and in assists with 25.