Column: It’s a new era of DePaul men’s basketball that starts with a no-excuse mentality 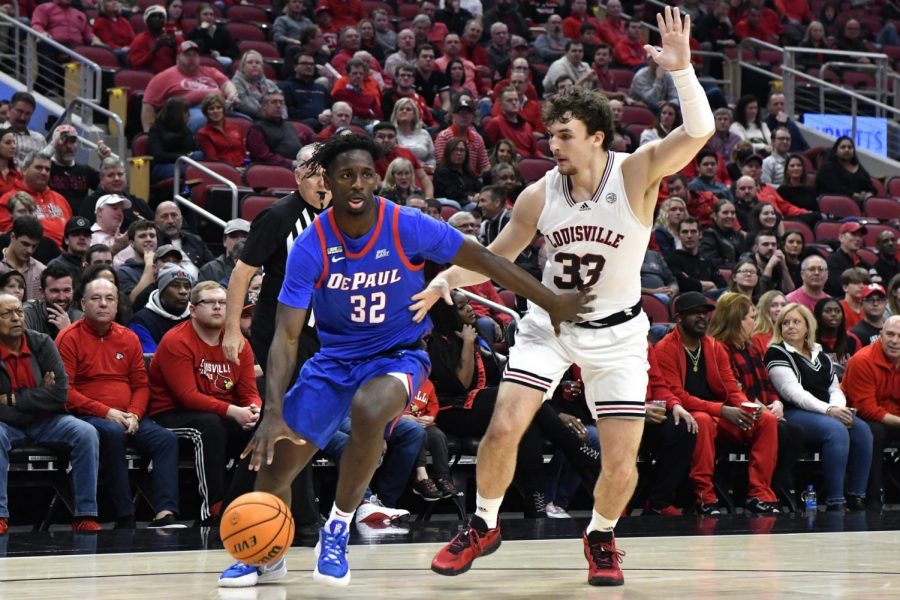 In the past, DePaul would have struggled to beat Louisville on the road after going down nine twice in the game.

Shots weren’t falling. It was a buzzing crowd in their first road test. Only seven scholarship players were available. The excuses would have been there for the Blue Demons as to why they couldn’t beat the Cardinals.

Those excuses would have been used in the past. But not now. Not when the program is looking to build something new.

This year marks a clean slate for DePaul men’s basketball, which features a new coaching staff and almost an entirely new roster.

The Blue Demons, under first-year head coach Tony Stubblefield, faced their first road game of the season on Friday. DePaul didn’t have its best shooting night, the offense had multiple scoreless streaks, and yet, the team came away with a 62-55 victory over Louisville — snapping a 10-game losing streak to the Cardinals.

Sophomore forward David Jones led the way with a career-high 33 points, including 23 in the second half, and 14 rebounds. He was the only Blue Demon who shot better than 50 percent from the field on the night.

“Give credit to DePaul, especially 32 [David Jones],” Louisville head coach Chris Mack told reporters after the game. “He just took over the game. He wanted the game more. He came up with 50-50 balls that really hurt our cause. He was a one-man wrecking crew. We had no answer for him, whether it was his iso drives getting to the rim and finishing or whether it was the cherry on top at the end shooting threes. He made some big time plays coming up with loose balls and breaking our back.”

This game won’t go down as one of DePaul’s most efficient games. At times, the basketball was ugly from both teams. DePaul had two four-minute stretches in the half where it couldn’t buy a basket. It went down nine in the first half and in the second half.

And none of that mattered in the end. The performance didn’t have to be pretty, it just had to be good enough to beat a stingy Louisville squad — and it was.

Senior guard Javon Freeman-Liberty, who came into the game top-10 in the nation in points per game, struggled with his shot all night long, finishing with only eight points on 2-of-15 shooting.

Again, it proved not to matter because Jones put his team on his back. He constantly came up with big plays in the second half to keep his team in the game and then put the Blue Demons ahead.

Jones had a stretch in the second half when he scored 12 straight points to put DePaul up 46-44. Then, with the Blue Demons trailing 50-49 with 5:16 left in the game, the sophomore forward poured in seven straight points to give the visitors the lead for good.

DePaul has a motto this season that embodies this team: “FindAWay.” It doesn’t mean the team has to play perfectly every game, but one way or another, find a way to get a win.

On Friday, the Blue Demons found a way to win in a fashion that wouldn’t have happened in previous years. The defense kept Louisville to its lowest point total on the season. At times, DePaul switched its defense from a man-to-man to a zone.

“We’ve played against zone,” Mack said. “It quickly morphed into switching man-to-man, so we just continued to run our man stuff… Give DePaul a lot of credit, they played big around the basket. We didn’t crack the lane nearly enough to put enough pressure to get to the free throw line.”

That’s indicative of the preparation that DePaul put into this game to give the Cardinals different looks all night long. One of the criticisms of previous DePaul teams was their lack of preparation and not adjusting well to the opponent.

That wasn’t the case on Friday. Stubblefield and his coaching staff made sure that the Blue Demons had the right defensive gameplan to contain the Cardinals’ offense.

It also helped that junior forward Nick Ongenda commanded the paint like a young Dikembe Mutombo, blocking eight shots and altering a couple of other attempts. With scoring inside the paint not an option most of the night, Louisville was forced to jack up shots from behind the arc, which resulted in a 7-of-33 shooting performance.

DePaul’s offense is still a work in progress, ranking 110th in adjusted offensive efficiency, according to KenPom.com. Yet, the Blue Demons improved to 8-1 on Friday, jumping to No. 50 in the NET rankings and picking up its first quadrant-one win of the season.

It hasn’t always been perfect this season. It won’t always be perfect, but this team is doing what other previous DePaul teams have struggled to do — finding a way to win when different situations aren’t ideal.