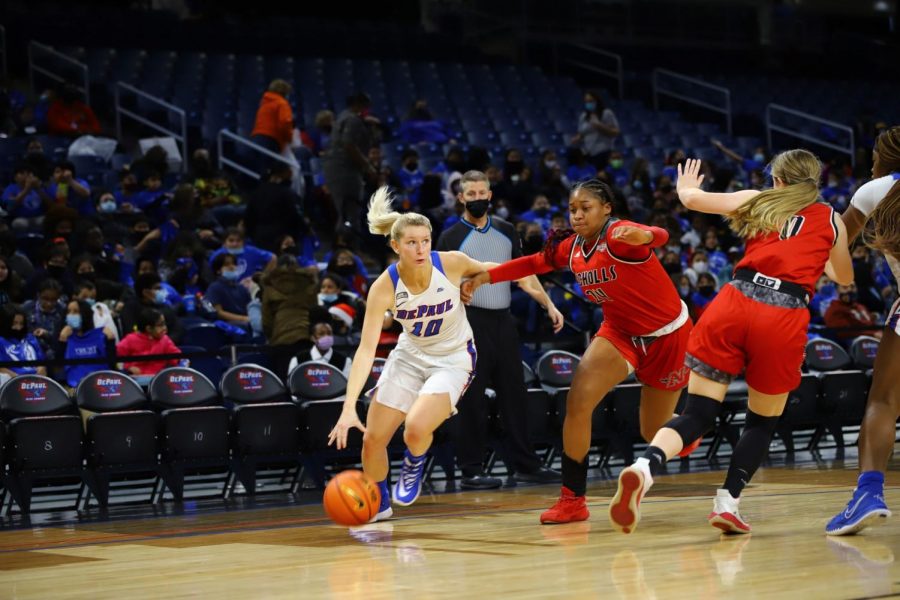 Senior guard Lexi Held drives towards the basket in the first half against Nicholls State.

Coming off the victory over No. 14 Kentucky on Thursday night, the DePaul women’s basketball team faced off against Nicholls State on Tuesday morning. In front of 1700 Chicago Public School elementary students and staff, the Blue Demons took a commanding 100-72 victory over the Colonels. Led by a 21-point effort from senior guard Sonya Morris and 16 points off the bench by Dee Bekelja, DePaul improved to 9-2 on the season.

The first quarter didn’t start off well for the Blue Demons, prompting head coach Doug Bruno to pull the starters a few minutes into the game. Nicholls St. led by 2 with 7:31 left in the first quarter. The second unit, led by Bekelja, played some solid defense to turn the tides in favor of DePaul. The starters began to come back in, and DePaul led 23-14 at the end of the first period.

“I think our energy was fine, but when we start a game with a missed layup and a missed putback, I just think there was not a lot of focus,” Bruno said.

Going into the second quarter, DePaul certainly focused up, going on an 18-0 run to start the period, capped off by a layup by Morris. Down the stretch, DePaul forced turnovers and shot efficiently from the field. Using aggressive drives to the rim, and great rebounding effort, DePaul controlled the game from that point on.

Rebounding was a big factor in Tuesday’s game. DePaul pulled down 27 offensive rebounds, leading to 27 second-chance points. 60 points in the paint for DePaul was an eye-popping statistic. Adding to their country-leading assist per game number, the Blue Demons assisted on 23 of their 40 made field goals.

Nicholls State, led by forwards Bryanna Washington and Chelsea Cain, who scored 16 and 18 points respectively, managed to recover the quarter a bit. By halftime though, DePaul had increased its lead to 47-30.

The third quarter began and the starters for DePaul were still out. Aneesah Morrow, who was just named the national freshman of the week by the U.S. Basketball Writers Association, did what she has done all season: get rebounds and get second chance points. She had 14 points and 9 rebounds, 6 of which were offensive rebounds.

DePaul controlled the rest of the game from halftime — by the fourth quarter, they led by nearly 30 points. This led to larger minutes from some non-starters, including Kaitlyn Ammons, Kendall Holmes and Hannah Purcell.

“I thought Kaitlyn Ammons is improving,” Bruno said. “I think her game is getting better. I really think she is a good, solid interior post player, and she needs time.”

The stands at Wintrust were packed with CPS students and staff whose shouting and cheering gave the Blue Demons an extra push. It was a very unique atmosphere while the DJ played “Baby Shark” and “Let it Go” from Frozen. The halftime show included a dance off between a group of elementary students who were able to show off their moves on the basketball court. The energy from the young fans was a change of pace to the normal crowd for the Depaul Women’s team even if the cheers weren’t always for the right reasons.

“Even if it’s not something to cheer for, they’re still cheering for us,” Bekelja said. “It’s really cute and it’s always a fun time.”

DePaul University is one of the first schools to start field trip day to include Chicago students in a unique opportunity. DePaul Athletics funds the trip yearly, including promotional T-shirts and courtside snacks. The event filled the seats of around 2000 students and staff giving a boost of confidence for the team.

“We already get a lot of love from fans,” Morris said. “But kids are just, like, happy to be here. So they cheer for every little thing you do. Like if you look at them or wave at them you make their whole day, and it makes my day, personally.”

DePaul received votes in this past week’s AP Top 25, and note that its schedule gets tougher through the Big East season. Thursday they face off with Northern Illinois at Wintrust Arena, then they go on the road to Queens to take on St. John’s on Sunday, then capping off their busy week on Dec. 22 at home against Notre Dame.