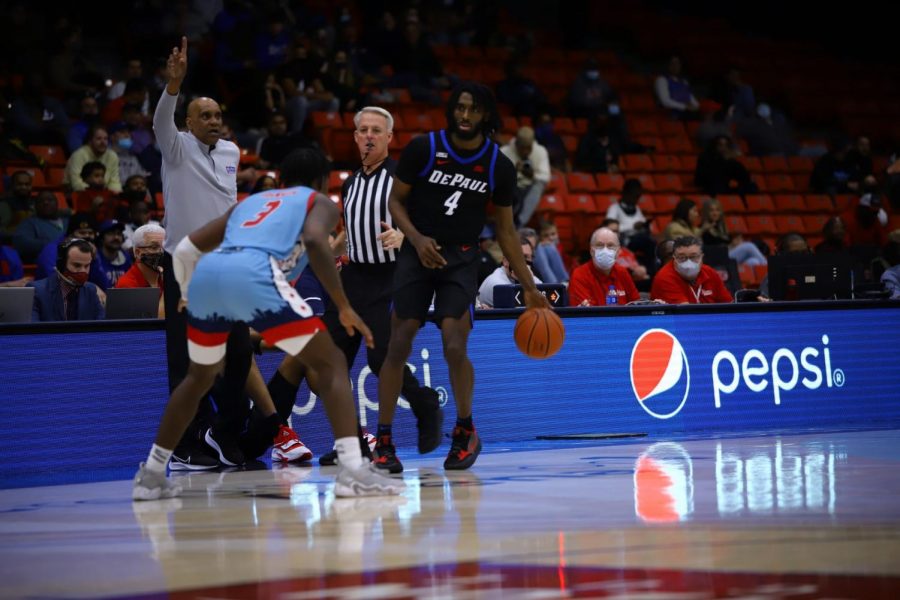 Senior guard Javon Freeman-Liberty assesses the offense with direction from head coach Tony Stubblefield late in the second half.

DePaul has had to cancel its upcoming game with Creighton due to positive Covid-19 test results in the men’s basketball program, the athletic department announced on Saturday.

According to Big East rules, a team that has to cancel a conference game due to Covid-19 protocols is forced to forfeit the game. The Blue Demons, as a result, are assigned a loss in the conference standings, but their overall record stays at 9-1.

Creighton, on the other hand, picks up a win in the standings, improving its conference record to 2-0. The Bluejays defeated No. 9 Villanova 79-59 Friday night.

This is the second consecutive game that DePaul has had to cancel because of Covid-19. The Blue Demons were supposed to play Northwestern on Saturday, but that game was scrapped two days ago after DePaul learned about its positive cases.

Everyone at DePaul was required to get fully vaccinated before the school year started in September.

The Big East has already been forced to cancel two conference games this season, with the first coming a day ago after Seton Hall had to pull out of its game against St. John’s on Monday. The Pirates also canceled their game against Iona that was scheduled for Saturday.

DePaul and Seton Hall are supposed to play each other in Chicago Thursday night. At this moment, that game is still on the schedule.

The Blue Demons have started this season winning nine of their first 10 games, with the only loss coming to Loyola Chicago two weeks ago. Head coach Tony Stubblefield is in his first year at DePaul, looking to lead the program back to the NCAA Tournament.