Students find self expression through tattoos 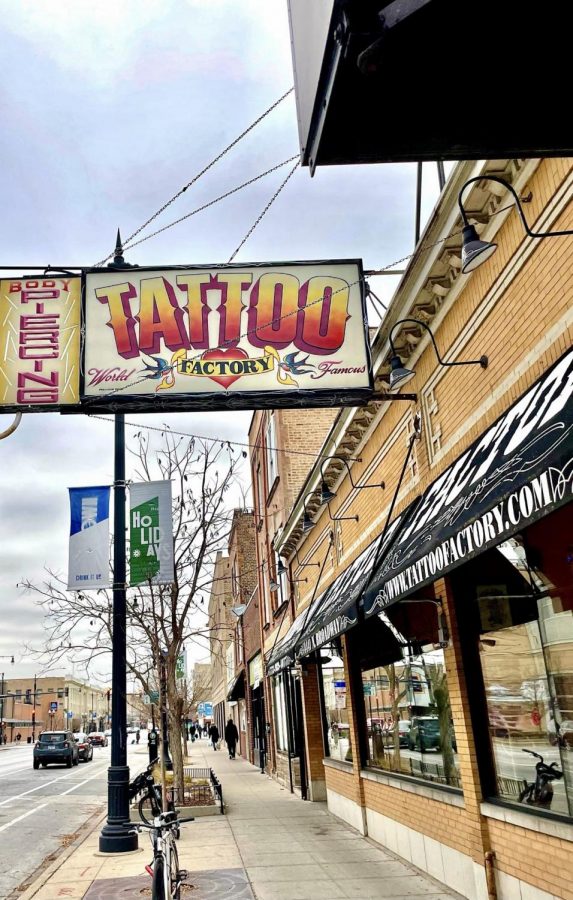 Tattoo Factory off the Wilson stop is one of the many tattoo shops students go to.

We all express ourselves in various ways, the music we listen to, clothes we wear, piercings, and, of course, tattoos.

College is the time in a young adult’s life where they decide to book an appointment at a tattoo parlor or have their friend give them a hand-poked tattoo in a living room apartment.

DePaul’s campus is a stop away from the Belmont stop where one of the oldest tattoo studios in Chicago and Illinois resides: Chicago Tattoo and Piercing Company.

Originally called Cliff Raven Tattooing, the studio has been around since the mid-1960s and changed its name back in 1973 to Chicago Tattoo when owner Dale Grande took over.

Paving the way for cleaner and safer tattooing protocols and, in part, responsible for helping lower the tattooing age to 18 by starting an online petition as well as sending letters to all Illinois House members, the city’s tattoo scene would not be what it is today without Chicago Tattoo and Piercing Company.

Every tattoo artist has a unique inking style such as geometric, lettering, illustrative, minimalism along with others. There are small, home-run tattoo businesses, which tend to be cheaper, and there are endless options for traditional tattoo studios.

“The way we evaluate pricing is mostly by the size of the tattoo and detail within that size along with the placement for the design,” Grande said. “For instance, the price of a four-by-four tattoo is very simple inside, say, a black square versus the same size tattoo with a lot of detail within.”

Chicago Tattoo and Piercing has a minimum of $100 plus a $150 hourly rate.

This is common for most tattoo studios, though this may be expensive for college students on a budget.

Emma Anderson, a senior at DePaul who runs a small stick and poke business, offers affordable prices for the typical college student budget.

“I do pricing based on the time it takes me to do the tattoo,” Anderson said. “The average tattoo takes around an hour. I will usually charge $25 to $30. Smaller, quick tattoos like little symbols or words take much less time, so I charge less for that. I don’t mind working with someone’s budget either.”

No matter where you choose to get a tattoo, it is a unique form of self-expression and art.

Tattoos are a permanent reminder of a particular time in life or an experience that you shouldn’t forget. Not only that, but they are a beautiful form of art.

“The designs that people want vary from mild to wild. We get a lot of ideas from clients that they found online,” Grande said. “[Designs] may be tattooed on a rock star or a ballplayer or actor, and they want the same design.”

Everyone gets a tattoo for a different reason, ranging from a dedication to someone or a representation of themselves, but they all last forever, giving them masses of meaning.

“We also do a lot of lettering,” Grande said. “Quite a lot of clients want phrases or quotes that they have seen or read that relate to their own feelings. It is such a broad spectrum of ideas and designs that are requested.”

“I wanted my first tattoo to represent my dad who passed,” said Vanessa Pezza, a DePaul senior majoring in marketing management. “Getting his signature on my body represents that he is always looking over me. It’s a nice reminder of him when I see it too.”

Pezza isn’t the only student dedicating a tattoo to a loved one. Daria Dittman, a senior at DePaul, has two tattoos dedicated to her brother. .

“Two of my tattoos are in dedication to my brother who passed,” Dittman said. “My mom and I both got the same tattoo to remember him by, which is my favorite one.”

“My tattoos definitely represent my values of family,” Pezza said. “And positivity that everything will turn out how it’s meant to. Tattoos are beautiful, and it’s a fun way to express what’s important to me.”

Some people plan out their tattoo appointments in advance, but other students like Angie Rainey, a senior at DePaul, didn’t book any appointments or have a fully formed idea in mind when she got her first tattoo.

Nonetheless, even when you haven’t planned out a tattoo, it can still mean just as much as tattoos that have been meticulously thought out.

At the time Rainey got her first tattoo, she was a freshman in college only just getting adjusted to the lifestyle of a college student.

“I love tattoos because they represent your life at a certain moment,” Rainey said. “So that specific tattoo caught me at such a transformative and new time in my life.”

Anderson shared a similar experience when she tattooed her roommates and herself.

“I have a shared matching tattoo between my roommates and me that means a lot to all of us,” Anderson said. “It was a shared bonding experience, and it really does mean a lot that my friends trust and love me enough to doodle on them permanently.”

Sometimes the tattoo itself doesn’t have to procure a ton of meaning, but it’s being able to look down at the art on your arm and remember what was going on at that specific time.

“I don’t think all tattoos have to have meaning,” said DePaul senior Milan Ospenica. “Any piece of art can look good to the right person even if it’s completely abstract.”

No matter what tattoo you’re getting whether it harbors a memory or not, it all comes back to the art going on your body.

“It doesn’t hurt to get a tattoo you know you will love,” Ospencia said. “It is art at the end of the day.”

Not all DePaul students are getting tattoos for the meaning, but that doesn’t stop their tattoos from carrying the reminder of a moment in time that they can look back on whenever they gaze down at their arm, leg or another place on the body.

No matter the reason, whether a tattoo has a special meaning or doesn’t at all, DePaul students are expressing themselves through body art in a myriad of ways.