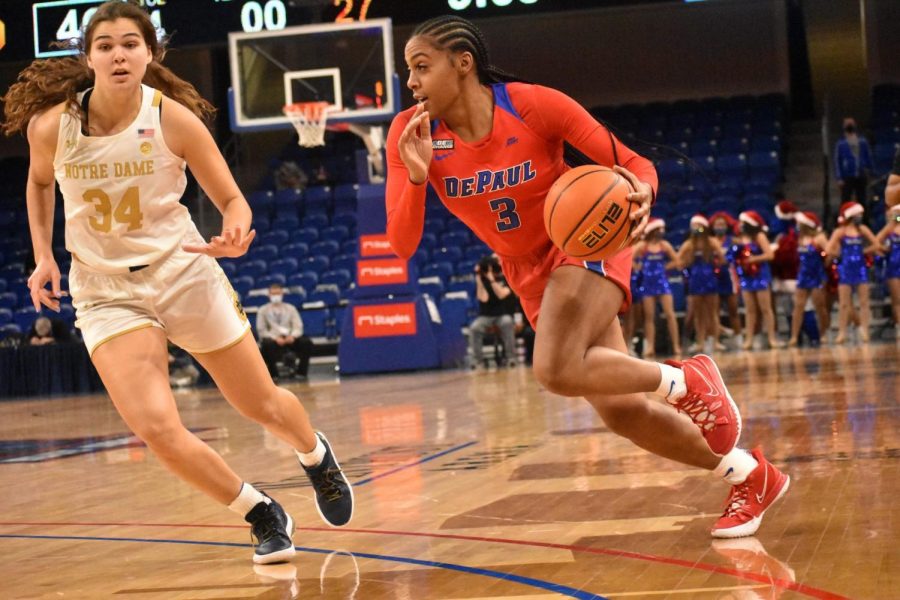 In a back and forth game, DePaul struggled to get over the hump, falling to No. 20 Notre Dame 91-86. The loss puts the team at 11-3 before heading into the holiday season.

Freshman forward Aneesah Morrow started the game off with a jump shot from the post. Off the missed free throw, Graduate guard Deja Church scored the fastbreak layup to tie the game at four.

The next possession, Morrow scored her second basket off an “And-1” to give the team the early 7-4 lead. Senior guard Lexi Held hit the mid range jumpshot to tie the game at nine with seven minutes left in the first quarter.

Rogers came down the fastbreak and made the first three point field goal of the game, followed by Senior guard Sonya Morris’s pull up jumpshot to give the team a 14-9 lead. Notre Dame kept the game close, making it a 15-14 score at the first break of the game.

Coming out of the break, Rogers scored a basket giving the team a 16-15 lead. Morris begins to heat up, scoring off of Notre Dame’s missed free throw to tie the game at 19 and then hitting a bucket to end the quarter to give the Blue Demons 22-20 lead. The team shot 56 percent from the field while holding the Fighting Irish to only 39 percent shooting.

Morrow started the second quarter just like the first, scoring a jump shot from the paint to give the team a 24-22 lead. The following possession, she drives down the lane and scores on a hookshot to extend the lead. Held scored on a pull up basket the next possession to give the team a 28-26 lead.

After a strong start, Notre Dame takes off offensively, and DePaul’s  offense goes through a tough stretch. The Blue Demons make one of their next 10 field goals and experience a four minute scoring drought before junior guard Kierra Collier hits a three-point bucket to cut Notre Dame’s lead to three.

But the Fighting Irish were too much, as the team went on a 9-0 run to finish the half with an 11 point lead. At the end of the half, DePaul was down 44-33. The Blue Demons shot only 26 percent in the second quarter, 18 percent from the three point line. Morrow led the way with 10 points. Rogers is right behind her with seven points.

As Notre Dame continued to roll, DePaul started the third quarter hitting their first five shots. Morris comes out the gate with a pullup jump shot off the fastbreak, while Church scores a layup the next offensive possession to cut into the deficit. On an out of bounds play, Morrow scores a layup and Rogers follows up with a floater in the lane on the next possession to cut the deficit to 11. Morrow and Rogers continue to tag team, scoring back to back layups that start a 6-0 run to cut Notre Dame’s lead to seven.

Morris afterwards scores an “And-1” layup to bring the team closer to another offensive push. Following the made free throw, DePaul’s defensive pressure disrupted the Fighting Irish, creating turnovers that led to Church scoring off a steal. Held continued her offensive efforts by converting on a big four-point play that cut the Fighting Irish lead to three with 4:30 left till the end of the third quarter.

DePaul hit 9 of their last 11 field goals, however, The Fighting Irish fought back, hitting fiveof their last sevenshots, including three straight. Notre Dame finishes the half on a 8-0 run, forcing DePaul into the fourth quarter down 13, 72-59.

Held started the fourth quarter with a quick basket to cut the lead to 11. Morris followed up with a bucket of her own to cut the deficit to single digits. Rogers hits the first three point basket of the quarter to cut the lead to 6. Off a defensive stop, Collier scored on the transition fast break to cut the lead to four with 7:30 left in the game. After the break, Collier picked up where she left off, scoring another layup off a drive to cut the score to a 74-72 deficit. Church scored the “And-1” layup, bringing the team down by one, 78-77.

It was at this moment, Notre Dame Morris continued to keep the pressure on the team offensively, hurting DePaul in pick and roll offense and dominating the paint. But DePaul does not quit, thanks to the leadership of Held on the offensive end.

Held steals the ball and scores the transition layup to make it a one-point game. After a couple Notre Dame scores, Held hit a step-back three-point field goal to cut the lead to two with 30 seconds left in the game. Following a timeout, Church scored a quick layup to maintain the two-point deficit with 18 seconds left. Notre Dame ultimately sealed the deal in the end behind clutch rebounding and free throw shooting, overpowering DePaul’s comebacks.

Morrow led the way with another 19 point, 10 rebound double-double. Held had 18 points. Morris chipped 15 points of her own while Rogers had 14 points.

Notre Dame is the fourth ranked team DePaul has played so far this season. Held discussed how the teams’ experience played a role in exerting their mental toughness throughout the game.

“Because we do play a lot of ranked teams, we don’t think that is a factor anymore in playing those games,” Held said. At the end of the day it is always hard to pull out wins against great teams, but playing top ranked so often helps.”

Morris concurred with Held, highlighting other areas of the game the team definitely could have done to better position themselves to win.

“It starts with rebounding,” Morris said. “With rebounds and second shots, that’s the game right there. Better rebounding, offensive execution, sharing the ball and sitting down on defense guarding the post. There are a lot of things we could have done better.”

Regarding sharing the ball, the team only had 10 assists. Head coach Doug Bruno emphasized the importance of having a moving offense that includes multiple passes before looking to score the ball.

Along with their lack of assists, the team also only recorded seven points from the bench.

“It is tough,” Bruno said. “We just have to keep scrambling.”

The team is now awaiting the arrival of No. 10 UConn. Although they will be without National Player of the Year sophomore Paige Bueckers, the team is still dangerous and a tough matchup to prepare for, according to Bruno.

“UConn is down some players, but they still have a few players that are going to get drafted to the next level and a great coaching staff,” Bruno said. “This is a good UConn team. We are going to have our hands full.”

The team plans to prepare for UConn after Christmas, starting back practices on Monday, the 27th leading up until the game. The team plays the Huskies on Friday, Dec. 31 at 1:00 pm CST.