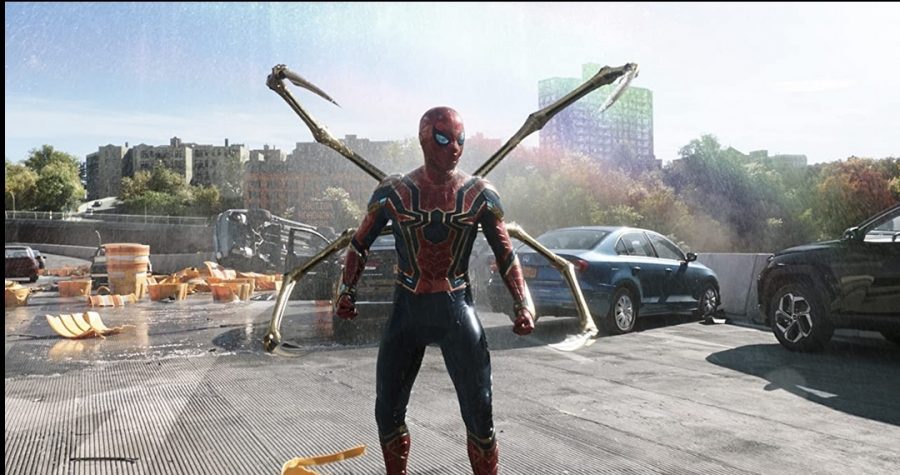 Swing into this article with caution, spoilers below.

On opening weekend of Spider-Man No Way Home, the film has already made  over 700 million dollars in ticket sales and became the third-highest grossing film of 2021 at the global box office. This highly anticipated film directed by Jon Watts is one of the first movies to be released in Phase Four of the Marvel Universe. Phase Four also includes the television series Wandavision, streaming on Disney Plus, and Eternals, which is now showing in theaters. As the newest phase strays away from the original Avengers,  this beloved and newest addition to the Marvel Universe introduces a world filled with sorcerers, witches and parallel worlds.

For many, it reconnects a time of the classic Marvel films collecting nostalgia for the previous Spider-Mans like Tobey Maguire and Andrew Garfield while still creating a new energy with Tom Holland. The story leads us into a new struggle Peter Parker finds with his unpopular fame of being Spider-Man. As his friends take the hit with their college acceptance letters denied for association with Spider-Man he meddles with magic to try and make up for the mess he created. With Peter Parker’s history of clumsy mistakes, he causes Dr. Strange to mess up a spell creating a crack in the universe making him a target for villains looking to find the “one and only Peter Parker in New York”.

As a fan of the Marvel Universe, it is sometimes hard to critique their work since most of them are fond memories from childhood. But that comes as an understatement to look back now and realize the movies aren’t exactly perfect.The execution seemed a little messy with the combination of villains assorted but quickly turned around in a not so surprising appearance of the past two spidermen coming together to save the day.

While there were multiple villains pulled throughout the many ages of Spider-Man including Doctor Octopus played by Alfred Molina and Jamie Foxx as Electro, William Dafoe once again steals the show as Green Goblin. With his incredible acting and demand in doing his own stunts maybe MCU knew they would never find a better villain with a comeback from over twenty years ago.

With the inclusion of a personal favorite, Sandman is seen in the beginning as a partner in helping spider-man but soon realizes he isn’t serving who he thought he was and is accidentally grouped with the fellow villains that already met the new Peter Parker. The small inclusion of Sandman almost seems off as he is portrayed as an enemy when his only appeal was to go back home. Sandman wasn’t the only small throwback role, Matt Murdock “DareDevil” (Netflix tv show of marvels) was the lawyer in Peter’s case of Mysterio’s death featuring a cute moment to remind fans of his physical abilities after catching a brick through Peter’s window.

Andrew Garfield did such a terrific job on this film that it almost felt like no time had passed since his last performance as Spider-man in 2014. With his sly-wit and undercut sense of humor, his time on the screen was deeply missed. A tender moment that made many people in the audience hold back tears was the scene of MJ falling off a building and Andrew Garfield’s spider-man rushing in to catch her. Something he couldn’t do with his own love interest back in The Amazing Spider-Man 2 with Gwen Stacy played by Emma Stone.

Growing up with the first spider-man, Tobey Maguire, his presence in the film gave a fatherly figure and voice of reason after his many years fighting injustice. His advice towards Tom Holland’s character about moving on from grief instead of anger became a key point in Holland’s later success in the movie showing growth from his own personal mistakes.

One of my favorite parts was the discussion of the three spider-men coming together to share their triumphant stories of saving the day only to soon see the difference between each of their stories. It really shows the age of Marvel when Tom Holland describes his adventures in space, something the other two have never even imagined doing. As they all quote the famous lines “With great power comes great responsibility” that came from each Spider-man’s respected guardians a new bond is created with the three of them. The quick and connecting friendship between the three seemed intentional just for the fans to enjoy seeing their favorite superheroes finally on the same screen.

Expected superstar entrances and fan service with emphasis on audience appeal and witty banter is not uncommon with Marvel movies which at this point is almost dull. Marvel cultivates an aura of infinite amount of possibilities with their universe and yet thrive on their reliable formula. Undeniably I still thoroughly enjoyed it but I anticipate the future of Marvel and what is to come with this new era.