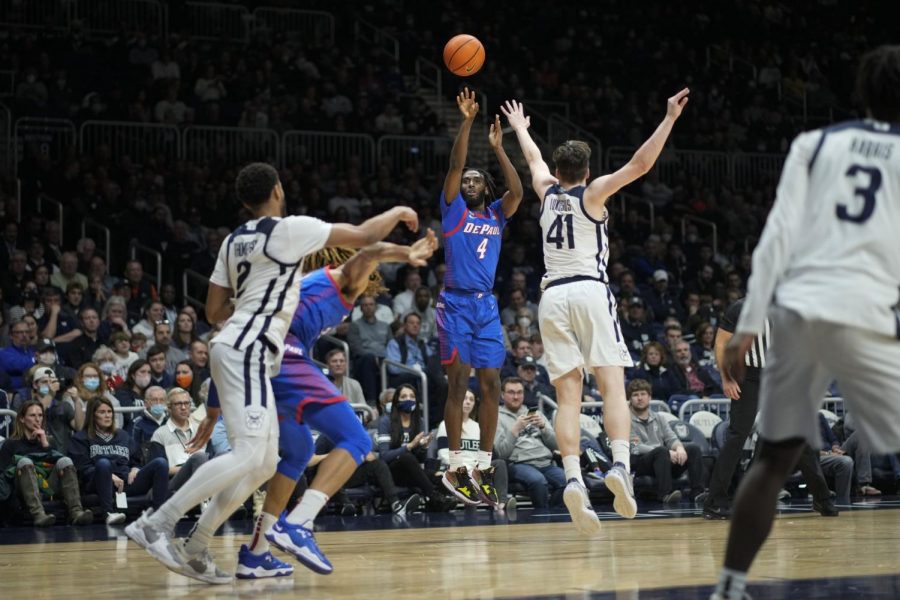 At times, it feels like a reoccurring nightmare if you are a DePaul fan who has previously watched this program get off to strong starts in non-conference play before struggling to win in the Big East.
It’s still too early to tell if this year’s DePaul team is the same as previous years’ teams. But after getting off to a 9-1 start in the non-conference, expectations were high for the Blue Demons coming into Big East play.
Following a two-week Covid-19 pause that saw its first two conference games postponed, DePaul finally began Big East play with a trip to Butler on Wednesday. The Blue Demons, however, couldn’t overcome a slow start, losing 63-59 to the Bulldogs.
For the seventh consecutive season, DePaul has failed to win its first conference game of the season.
Prior to Wednesday’s meeting with Butler, DePaul’s last game came against UIC Dec. 14, a 72-66 win for the Blue Demons. Two days later, DePaul found out it had positive Covid-19 test results in the program, forcing the Blue Demons to cancel their visit to Northwestern and postpone their first Big East games.
According to head coach Tony Stubblefield, DePaul’s first and only practice coming off its Covid pause came on Tuesday, a day before the team traveled to Indianapolis.
And it showed on the court. DePaul looked out of sorts on the offensive end for long stretches of the game. The Blue Demons finished with 21 turnovers, shooting 38.8 percent from the field and 30.4 percent from the 3-point line.
Even the defense had moments of bad lapses, allowing Butler to convert easy looks around the rim and from the 3-point line. The Bulldogs started the game hitting 10 of their first 13 shot attempts, which put the home team up 24-14.
Stubblefield, however, did not allow the lack of practice time to be an excuse for the loss on Wednesday.
“I’m not into moral encouragement,” he said after the game. “You either win the game or lose the game at this level. This is the Big East, this is big boy basketball.”
DePaul was also without its second-leading scorer David Jones, who missed the game due to health and safety protocols, per a school spokesperson.
Jones is averaging 17.4 points and 8.3 rebounds per game this season. His absence was felt on both ends. Without Jones’ ability to create his own shot and get to the basket, most of the offensive pressure landed on senior guard Javon Freeman-Liberty, who finished the game with 13 points on 4-of-16 shooting.
“We have a certain number of turnovers that we are trying to limit this to,” Stubblefield said. “When you go on the road or even at home and you turn the ball over 21 times, you are not giving yourself the chance to win basketball games.”
There were multiple stretches in the game when DePaul would pull closer to Butler before the Bulldogs would take their lead back to nine or 10 points. In the first half, the Blue Demons were led by Nick Ongenda and Brandon Johnson, who combined for 15 of the team’s 26 points.
After Butler got up 30-20 midway through the first half, DePaul finally started to find its rhythm on the offensive end, cutting the deficit to four points. But those couple of positive possessions would only last three minutes.
DePaul finished the final 4:50 of the half scoreless, while Butler poured in seven straight points.
For the majority of the second half the same story played out: DePaul going through stretches of good and bad basketball, resulting in Butler holding a three or four-possession lead.
Ongenda ended up getting ejected from the game with 11 minutes left after he came off the bench during a scuffle between Yor Anei and Bryce Golden.
Turnovers continued to plague the Blue Demons, including a four-turnover stretch when Butler was struggling to put away DePaul in the closing minutes. The Blue Demons trailed 60-52 with 5:33 left in the game, but that score stayed the same for over four minutes because both teams went ice cold on offense.
DePaul showed some signs of life in the final minute of the game, even having a chance to tie the game at 60 after Johnson got fouled with four seconds remaining. Down 60-58, Johnson made the first free throw but couldn’t convert the second one.
Butler closed the game by making three free throws to seal the victory.
After the game, Stubblefield said it will be up to the medical group on when Jones is able to return to action. DePaul’s next game is against No. 21 Providence on Saturday at Wintrust Arena.