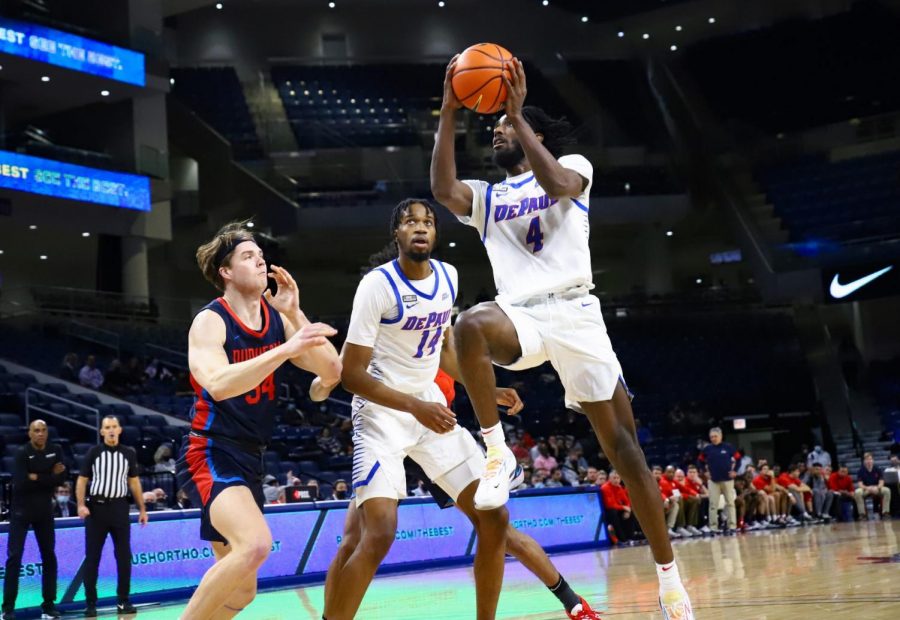 DePaul senior guard Javon Freeman-Liberty goes up for a layup against Duquesne on Tuesday at Wintrust Arena.

DePaul has been at this same position before. Just two years ago, the Blue Demons began the season winning 12 of their first 13 games, raising expectations to a place they haven’t been at for this program in a long time.

Entering Big East play with a 12-1 record to begin the 2019-2020 season, that was supposed to be the catalyst for DePaul to do well in the conference and push for its first NCAA Tournament appearance in 16 years.

Instead, the Blue Demons lost their first two conference games — to Seton Hall and Providence — in heartbreaking fashion, setting the team up for a disappointing record in the Big East: 3-15.

Fast forward to this season and DePaul — albeit with a new head coach and virtually a new roster — finds itself in a similar position to that team from two years ago. This season, the Blue Demons started with a 9-1 record, building expectations that this could be the year they climb up the Big East standings and get back to the Big Dance.

After a two-week Covid pause, DePaul played its first conference game of the season, a visit to Butler last Wednesday. But, just like how the Blue Demons began conference play two years ago, DePaul’s effort to start 1-0 came up short, losing 63-59 after Brandon Johnson missed a free throw in the dying seconds to potentially send the game to overtime.

Now, DePaul and head coach Tony Stubblefield find themselves preparing for a highly-anticipated game against No. 21 Providence on Saturday at Wintrust, looking to avoid an 0-2 start.

The Friars come into Saturday’s game 12-1 overall and 2-0 in the Big East. Ed Cooley’s team is led by center Nate Watson, who is averaging 14.8 points and 5.7 rebounds per game.

“Very, very good basketball team, very well-coached team,” Stubblefield said of Providence. “… We are going to have to play extremely hard to give ourselves a chance.”

Stubblefield, who was hired last April to replace Dave Leitao, spent the previous 11 years at Oregon as an assistant coach, reaching the NCAA Tournament seven times and the Final Four in 2017. Even though he was an assistant for all those games, Stubblefield has been a part of countless big regular season games that can shape how the rest of your season goes.

He is trying to avoid the latter with DePaul this season. It’s only the second game of Big East play for DePaul on Saturday, but a 1-1 conference record sounds and feels much better than 0-2 does.

“Our thing is we just got to continue to get better,” he said. “Obviously, we were fortunate where we did get off to a solid start, but it’s a different part of the season — this is part two of the season and this is the Big East. It’s going to be more challenging night in, night out. We are going to have to step [up] our level of play up another level to the teams we are playing against.”

DePaul struggled in its loss to Butler on Wednesday night, committing 21 turnovers, shooting 38.8 percent from the field and 30.4 percent from the 3-point line. After the game, Stubblefield mentioned that DePaul only practiced once — the day before the game against the Bulldogs — after its last game against UIC on Dec. 14.

The Blue Demons were also without sophomore forward David Jones against Butler, who was out due to health and safety protocols. As of Friday afternoon, Stubblefield wasn’t sure if Jones would be available on Saturday.

Senior guard Javon Freeman-Liberty, who leads the team in points and assists, is going to need to have a much better game against Providence than the one he had at Butler, where he finished with 13 points on 4-of-16 shooting.

Saturday’s game is an opportunity for DePaul to pick up its second signature victory of the season and, more importantly, avoid a seventh consecutive 0-2 start in the Big East.

The mindset, however, doesn’t change from playing Butler versus facing a ranked Providence team, according to Stubblefield.

“I think the mindset changes when you get to Big East play, because night in, night out you are going to be challenged,” he said.