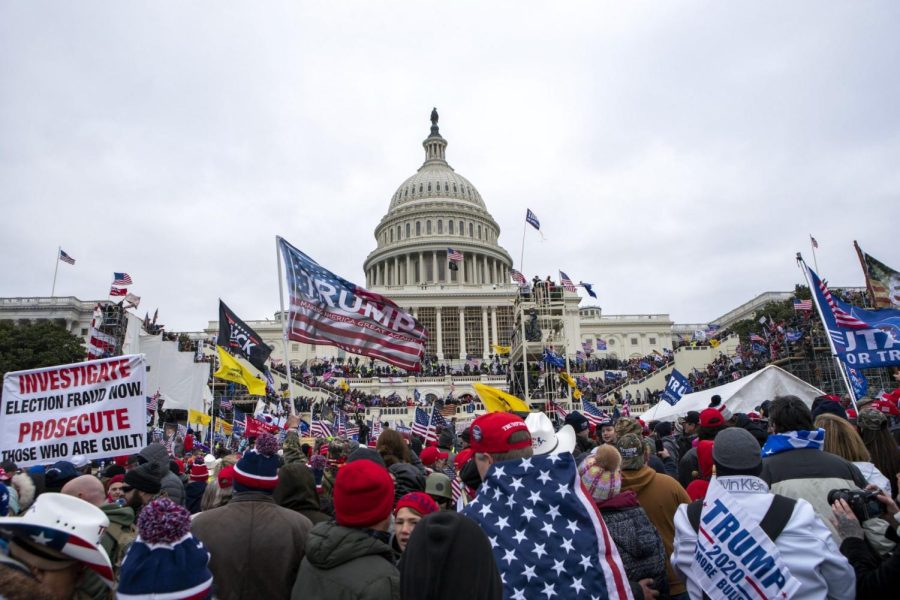 At 11:58 a.m., then-President Donald Trump spoke to a crowd of eager supporters at the Save America Rally just beyond the White House fence. Throughout his speech, Trump repeated several false claims of election fraud before calling on the crowd to “walk down to the Capitol” in opposition to Congress’s confirmation of the electoral vote count planned for that day.

By the end of the attack, the crowd had caused nearly $1.5 million in damages, injured at least 138 police officers, resulted in the death of Capitol Police officer Brian Sicknick and attempted to effectively bum-rush Congress into halting the confirmation of the 2020 presidential election.

It would mark the worst assault on the Capitol since 1814, when British forces set the building ablaze during the Burning of Washington.

But you’d have to go back 14 years before that to understand just how unprecedented the insurrection of Jan. 6 actually was.

“During the election of 1800, for the very first time in American history, one party defeated the other,” said Colleen Doody, associate history professor at DePaul. “And there was some question whether this very fragile republic could survive. But it did: John Adams voluntarily left office and turned power over to one of his biggest opponents, Thomas Jefferson. And ever since then, that transition has been something that has been absolutely central to who we are as a nation.”

For over 200 years, every losing U.S. president would follow the precedent of cordially accepting defeat.

“That’s what I find most disturbing about Jan. 6 of last year — that, for the first time since 1800, the question of whether we would have a peaceful transition of power from one party to another came into question,” Doody said.

Even though attempts by Trump and his followers to overturn the election ultimately failed, the alternative (and unfounded) belief that Trump actually won has persisted nonetheless.

According to an Axios-Momentive poll released Jan. 5 2022, only 55 percent of Americans accept President Joe Biden’s 2020 election win as legitimate. A similar poll conducted by UMass Amherst obtained similar results, suggesting that 58 percent of Americans and only 21 percent of Republicans view Biden’s victory as genuine, despite no credible evidence supporting claims of widespread electoral fraud.

Joseph Mello, a political science professor at DePaul, suggests the decentralization of news media has created a unique opportunity for incompatible worldviews to emerge alongside one another.

“We used to have one set of facts that we all operated on, because there were, like, four news networks,” Mello said. “You might have disagreed on what the best course of action was, but you didn’t disagree about what the facts said. Now, we have a situation where people are kind of in their own echo chambers. All of these cases of supposed voter fraud were litigated — they went to court, they had to produce evidence and they couldn’t produce any because there isn’t any. But that doesn’t stop people from recklessly claiming there was fraud.”

“It had huge cultural power,” Storey said. “Even if the people who said it and endorsed it had doubts about it, it was still the cultural currency of their moment. It was a thing that structured their reality. It structured their sense of who was right and wrong, who should be in leadership, who should be in charge, how God looked at them, how they fit into the universe. And because it was so woven into culture, it was hard for people who wanted to maintain a place within a culture that was their world to step outside of it.”

Storey continues, adding that for many contemporary Americans, a similar pattern emerged as their culture became wrapped in a fictitious, Trumpian understanding of the world.

“People are paid culturally for believing and endorsing certain things,” she said. “For whatever reason, this set of ideas is extremely rewarding for some people. They are gaining something deeply important to their sense of self by endorsing it and being part of this group. And that belonging, that identification, has become more important than anything — including their sense of citizenship and loyalty to the rule of law.”

That self-identification has continued despite Trump’s departure from the Oval Office nearly one year ago. Although Trump saw a decreased approval rating immediately following the insurrection, support has since rebounded and remains high among Republicans. According to a Pew Research survey released Oct. 6, two-thirds of Republicans and Republican-leaning independents want Trump to remain a national political figure. And according to a Sept. 12 CNN poll, 63 percent of Republicans and Republican-leaning independents say Trump should remain leader of the GOP.

With approval still high among the Republican Party, and with early polls placing Trump as the party’s frontrunner in 2024, a return to the presidential candidacy appears likely for the former chief executive. If Trump does choose to run again though, he will likely face an electorate notably different than in 2020.

“Certainly the Republicans, even those who disagreed with what Trump did, responded to all of those accusations [of voter fraud] by passing pretty restrictive voter laws — especially in places like Georgia — that I think are going to have a big impact in the next election,” Doody said.

In 2021, at least 19 states passed 34 laws restricting access to voting and over 440 bills containing restrictive voting provisions have been introduced across 49 states. Among those bills are proposed restrictions on mail-in voting and ballot drop boxes, stricter voter ID laws, shorter early voting periods and increased voter roll purges. Georgia even banned anyone from handing out water bottles to voters waiting in line, seemingly in the hope that voters will tire and leave before casting their ballot.

All despite there being no notable irregularities in the 2020 election.

Mello argues that these voting restrictions may be less about protecting electoral integrity and more about tipping the scale to favor Republicans.

“As political scientists, we tend to believe that there’s a safeguard here in that people want to win elections, and so when you realize your ideas are not popular enough to win elections anymore, you will change your ideas in order to win votes,” Mello said. “That’s how democracy’s supposed to work. Right now we have a party — the Republican Party — which, I think, culturally speaking, is out of step with where America wants to be. And so, the fear is that this party has basically said, ‘Okay, we don’t care about winning popular votes anymore. Since we can’t appeal to the electorate that exists, we’re going to create a new electorate. And that electorate is going to be receptive to our ideas by disenfranchising people who won’t be receptive to our ideas.’”

While there has never been a day like Jan. 6 before or since then, the social and political atmosphere that created the insurrectionist mob lingers. Baseless mistrust in electoral integrity, fragmented news media willing to promote falsehoods, conservatives unwavering in their support for Trump and Trump’s unwavering disregard for democratic norms all persist into 2022.

“There’s been maybe six or seven times in all of American history that it’s been this unstable politically,” she said. “It’s very difficult, isn’t it? It’s not just a topic of study. We’re living in it. We’re in the middle of it. All of us are. And we can feel the instability of it all, the effect that it’s had on our institutions and our policy. And we all have a stake in what will happen going forward.”