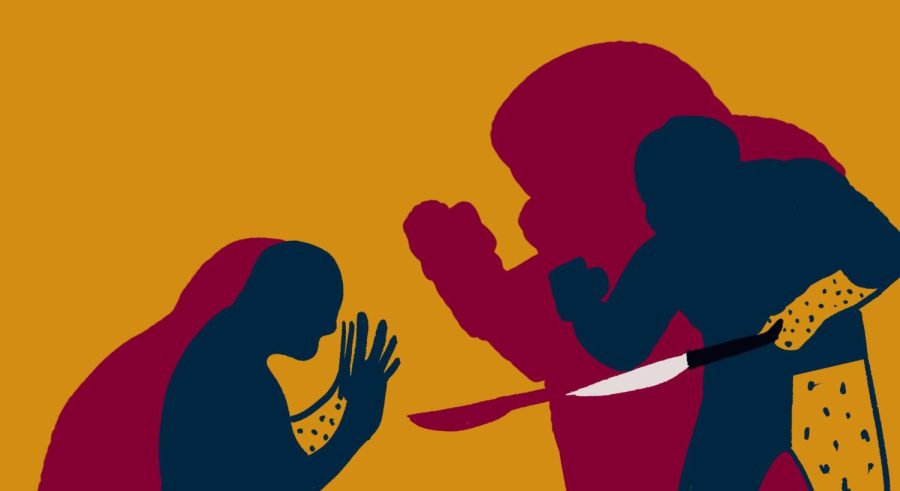 Freshman Hailey Bosek came to DePaul with no intention of needing a self-defense product, but by the time she left for winter break she never left her dorm without it.

“My roommate got me mace after a man harassed me at the Fullerton station and we saw him at a different station two days later,” Bosek said. “I carry my mace around my neck attached to my lanyard. I feel a bit safer with it. [Since then] my roommate and I have decided that we won’t really be walking anywhere past 10 [p.m.] anymore.”

Freshman Molly Martindale, Bosek’s roommate, said she carries a Birdie safety alarm and pepper spray to protect herself, and it came in handy when she and Bosek encountered the man.

“[We were taking] the Red Line to our morning classes in the Loop,” Martindale said. “A man would not leave [Bosek] alone and kept talking to her and was unnecessarily close to her. I moved in between [Bosek] and the man to try to get him to leave. When the train came, he got on with us and stood over [Bosek] as she sat scrolling on her phone.” Martindale had her pepper spray ready to use if necessary. She got some people to notice the man was making them feel unsafe by showing her pepper spray. Luckily, the man got off the train after a couple of stops.

“Although I didn’t use my self-defense products, I felt safe knowing I had them if I needed to use them,” she said.

Martindale said that while there are many different types of self-defense products, pepper spray is the best product.

“It stuns the attacker and gives you time to get away,” she said. “The product itself stains skin so the suspect will be identifiable within a certain time frame after using the pepper spray.”

Many students, including freshman Gylani Oliver, agree with Martindale that pepper spray is the best choice for a self-defense product.

“I hate the idea of hurting someone or even potentially killing them,” Oliver said. “Pepper spray enables me to blind the person and temporarily stop them without genuinely injuring them or anything. I don’t really think there’s a better self-defense product. Each self-defense product out there may work well with one person but be harmful to another. It’s a little bit of trial and error in figuring out what makes you safe.”

While there are alternatives to pepper spray, some people are not as comfortable using them because they demand you to be close to the attacker. Bosek said she prefers pepper spray because she can maintain more distance.

“I would carry a taser but that means I have to get close to the person,” she said. “I know things like pulling ears, pinching thighs and throwing a wallet away from you and running can help. I have found these things out from other women and Instagram pages that promote feminism.”

“It makes me so frustrated because it’s seen as a mostly female issue to carry around self-defense items,” Bosek said. “That alone carries a lot of nuances about what it means to be a woman in the city or anywhere really. Self-defense is for everyone. Any gender can be attacked and it’s frustrating that women take on the majority of knowledge when it comes to being assaulted or harassed.”

Martindale said she also would like the audience for self-defense products to be expanded.

Recently, there has been increasing crime in Lincoln Park and DePaul’s public safety has responded by continuing their 24-hour standby on both campuses, as well as providing their escort service from 6 p.m. to 6 a.m. While many students would like an increased police presence on both campuses, there has not been a noticeable increase.

Martindale said she feels comforted by the police presence on both campuses but carries her self-defense products for when she is commuting.

“It does make me feel safer to know that there is police presence [on the campuses] but I still carry my self-defense products and stay aware of my surroundings,” she said.

Meanwhile, Oliver would prefer not to see an increase in police presence on campus.

“The only thing I have to say is that while there will always be terrible people out there, there is a difference between keeping yourself safe and straight up assuming [or] expressing prejudice,” Oliver added. “If you come from out of state and willingly choose Chicago then you must realize that while there is a lot of crime, not every raggedy-looking person walking on the sidewalk is trying to harm you. Not every person of color, especially Black men, are trying to rob you or cat call or do anything like that. I understand being safe, but please don’t generalize and make the few people of color living on campus feel as marginalized as we already do.”