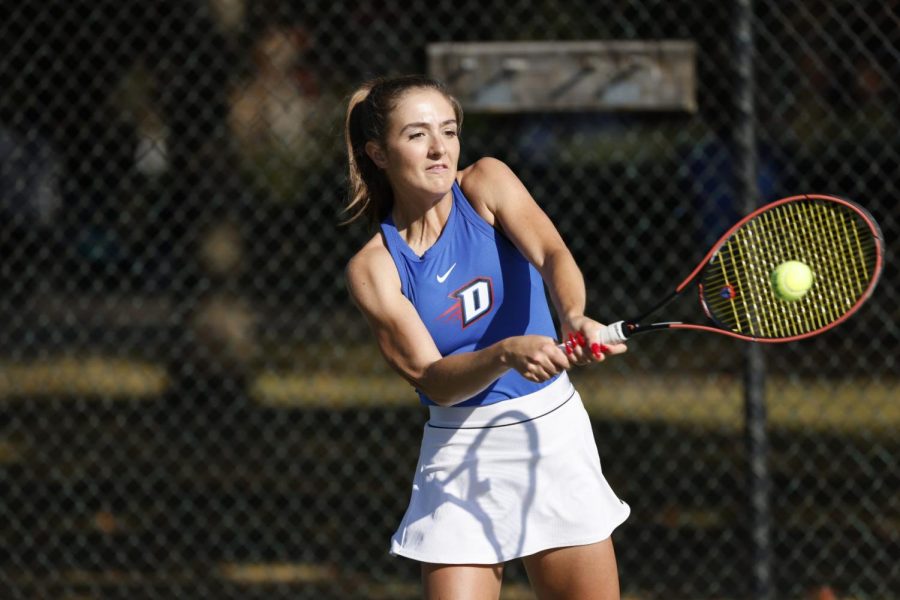 The winter-spring season is right around the corner for DePaul women’s tennis, and the team is ready to return to action.

The fall season was full of intense competition at multiple invitationals, including the Intercollegiate Tennis Association Midwest Regionals, where the Blue Demons had success and qualified for the Super Regionals in October. However, the Blue Demons fell short of victory there, and the team closed out the fall season at the Louisville Classic on Oct. 31.

Over the long break that came with DePaul’s quarter system, the team worked hard to stay in competition-mode, whether they went home or stayed in the Chicago area. With international and national students, the team was spread out over the winter break and worked with each other or on their own to stay in shape.

“It was really important for us to maintain what we were doing in our fall season,” graduate student Marija Jovicic said. “So, our coach, Marisa [Arce], gave us a whole plan of what we can do to maintain what we had done in the fall so that we don’t start all over in January again.”

In the fall, Jovicic occasionally teamed up with junior Maddie Yergler in doubles competition. The duo had success at the Redbird Invite, defeating opponents from the University of Chicago on the first day, and Bradley University on day two. The duo was victorious over Chicago State University at the Midwest Regionals the following week.

“I was so grateful this year when we had our fall season just because of everything with Covid,” Yergler said. “I really appreciated it more this year, so I’m just looking forward to hopefully playing our full season out this year.”

The team had their first practice on Jan. 5 and will kick off the season at home against Bradley on Jan. 21. The team’s home base is now at XS Tennis Village, and playing matches there is something that Arce and the team are looking forward to for this season.

“We’re playing at a different facility this year, [and] I think the atmosphere will be great,” Arce said. “Hopefully we’ll be able to have some cameras and live streaming and just a lot of things that we haven’t had in the past, so I think that’ll be really exciting too.”

The Blue Demons know that their competition will be fierce, but they believe that their biggest challenges will be battling Covid and injuries. However, those obstacles help drive the team to push harder and play their best.

“One of the biggest challenges that I had in the previous season is that the season can get really long and then, from weekend-to-weekend, you have to bring the same level of energy and enthusiasm,” Jovicic said. “It can get really hard pretty quickly, and especially with school and everything, but somehow we always found a way to get out of that, so I’m hoping that we’re going to do the same thing this year.”

While the team is ready to battle obstacles and play a whole season, their main goal is the same as it is every year: to win the Big East Championship. However, to do so, the Blue Demons know that they have to work hard every day and meet their daily goals in order to have success.

“For me personally, I think it’s all about what we do every day that’s going to determine if we are given an opportunity to reach our goals or not,” Arce said. “We can’t really control those matches that we win, but we can control what we do every day and that just sets us up for success.”

After opening the season with six non-conference matches, the Blue Demons have their first Big East matchup against Butler University on Feb. 18.

The team then plays at Purdue University two days later before returning to Chicago for their first conference game at home against Georgetown University on Feb. 26.