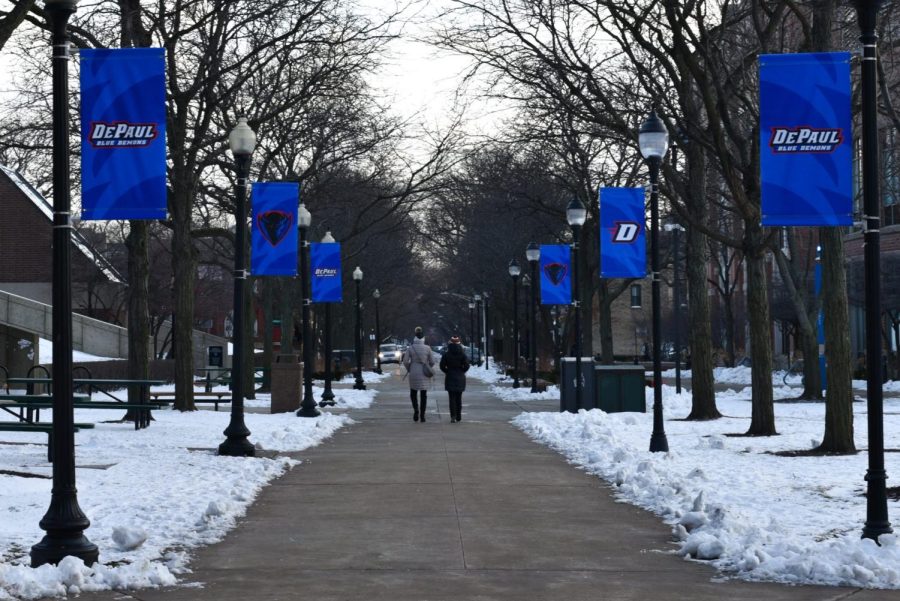 In person classes will resume Jan. 18, 2022; however, students will not have to show any proof of a negative Covid-19 test or require a booster shot

DePaul has only been in session for one week to begin the winter quarter, and the university is already experiencing its second-largest Covid-19 outbreak of the 2021-22 school year.

Since classes began last week, DePaul has reported 27 positive cases from students, faculty and staff — the most since September.

DePaul is currently holding classes online for the first two weeks of winter quarter, but the university is not requiring anyone to show proof of a negative test result when returning to campus and is only “encouraging” community members to get their booster shot.

Last Wednesday The DePaulia reported the university is having “on-going discussions” about requiring the booster shot, as of yet there has been no decision regarding if or when DePaul will require it.

Even with the increase in positive cases this past week, DePaul is still planning to hold in-person classes starting Jan. 18, according to a university spokesperson.

“DePaul is committed to in-person learning and we are hopeful that a cautious start to Winter Quarter will allow us to sustain a robust college experience the remainder of the year,” university spokesperson Mary Hansen said.

DePaul’s Student Government Association (SGA) passed a resolution on Thursday, asking the university to mandate the booster shot for everyone. The resolution wants DePaul to mandate everyone to submit proof of them receiving the booster by March 4.

Health and sciences professor Craig Klugman told The DePaulia it’s “not a bad idea” to require a negative test for students coming back to campus, but the logistics of that is the hard part.

DePaul offers free on campus testing for students, faculty and staff. Although DePaul only offers PCR tests, students reported receiving results in about a day.

Hansen also said that DePaul did not require tests because “if testing wasn’t readily available in areas where students spent winter break, the students could access on-campus testing immediately after arrival at DePaul.”

Other Chicago-based universities have started to mandate boosters as well such as Northwestern. Loyola University Chicago is remaining virtual until the end of January while also requiring the booster for their student before they fully return.

Northwestern is requiring everyone to submit proof of receiving the booster shot by the end of the month; Loyola hasn’t announced a timeline as of yet.

Northwestern — and other schools across the country — also limited students’ ability to attend men’s and women’s basketball games during its two-week Wildcat Wellness period.

DePaul, on other hand, is continuing to allow students to attend basketball games at Wintrust Arena for free. On Saturday, in DePaul’s 79-64 loss to No. 19 Villanova, the student section had its biggest student turnout for a basketball game in over a month.

According to the university, basketball games at Wintrust Arena are “optional, public events.”

DePaul Faculty Council Health Chair and professor Jay Baglia said since boosters are widely available in Chicago, he is unsure why there is hesitancy from DePaul to mandate it.

“It’s not difficult to get booster shots in Chicago,” Baglia said. “You might have to make an appointment two or three days out, but they’re there, they’re plentiful and there’s more versions or varieties than ever.”

With the national and local rise in Covid-19 cases due to the omicron variant, Baglia said he’s expecting DePaul will remain virtual until cases subside.

“I hope that they come out with a statement either about returning to campus or a booster mandate and ideally both before the end of this week,” he said.

As Loyola has chosen to stay virtual, SGA was also concerned over whether DePaul could make the same decision.

However, DePaul has not released any public communication about returning to campus since it announced classes will be held online for the first two weeks of winter quarter.

When DePaul originally announced they would go virtual in early December, faculty or staff were not consulted in this decision, according to 14 East.

However, Baglia confirmed that the DePaul Community Health committee will include two faculty members.

“It is good that we’re going to have representation on that committee,” he said. “I think that what has to happen in terms of getting back to campus is there has to be continued collaboration between student government, staff and faculty council.”

Klugman believes communication from the administration can be better when it comes to DePaul’s Covid-19 response and can be more inclusive.

“Could we have done better communication and better inclusiveness in the faculty, the staff and students being part of the decision making process or seeing more about what went into making the decisions — yes,” he said.

Klugman also said he would have liked to see the university put out some sort of message when winter quarter began regarding what DePaul’s plans are following the two-week virtual period.

DePaul has not responded to SGA’s booster mandate resolution and the administration will have final say about whether to mandate it at all.

“Here’s what everybody’s saying that we should do,” Baglia said. “Let’s do it at DePaul because we’re a community.”