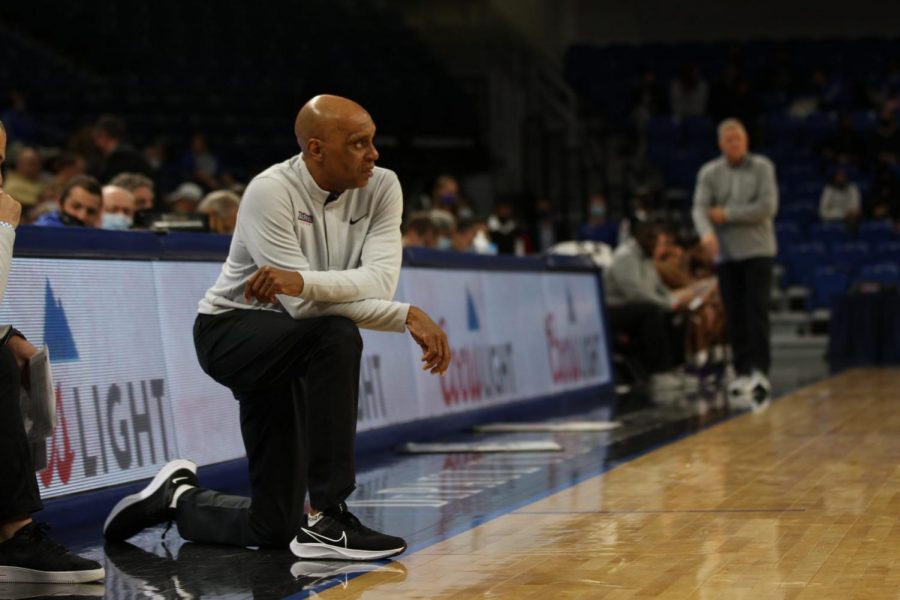 It was an ugly scene at Fiserv Forum as DePaul took another conference loss to Marquette University 87-76. DePaul remains winless in conference play, extending its losing streak to five games in Big East play.

Sophomore guard Jalen Terry scored the first basket of the game for DePaul with a three-point field goal off a screen to give the team a 3-2 lead. Senior guard Javon Freeman Liberty then scores a layup off the lob from Terry to cut DePaul’s deficit to one with 16 minutes left in the first half. Graduate forward Brandon Johnson follows up on the next possession with a step back three-point shot to give DePaul a two-point lead, 8-6.

Off an offensive rebound, senior forward Yor Anei scores on a goaltending layup to expand the lead 10-6 before the first break of the game. Sophomore forward David Jones later cuts to the basket and scores a layup to cut the team’s deficit to two.

Anei keeps the game alive with his presence around the paint in the half court offense, including offensive rebounds that lead to putback layups. DePaul kept the game close, losing by five points.

Freeman-Liberty fights to keep DePaul in the game, scoring off of his own miss after breaking Marquette’s full-court pressure. After cutting Marquette’s lead to five, Freeman-Liberty drew a foul on the next possession that led to two free-throws, bringing their deficit to three points 28-25 with 5:30 left in the game. Gebrewhit scores a three-point basket off the dribble followed by Freeman-Liberty’s transition layup to cut their 30-31 deficit to one with five minutes left in the half.

Coming out of Marquette’s timeout, Gebrewhit scored a layup after breaking Marquette’s full-court press. DePaul scores on multiple possessions. Graduate forward Javan Johnson led the way by scoring on a three-point basket, followed by Brandon Johnson hitting a jumpshot from the post.

Jones then hits a three-point shot before DePaul calls timeout. Jones scored a layup in the half court coming out of the timeout to cut the lead to two. Brandon Johnson then draws the foul before the final buzzer to and splits the free throws to be down by one, 44-43.

DePaul shot 45 percent from the field and 54 percent from the three-point line. The Blue Demons also dominated the rebounding department, grabbing 11 more rebounds (23 in total) than Marquette with 12 of the rebounds being offensive rebounds. Freeman-Liberty led the way with 13 points. Johnson, Jones and Anei all contributed six points each.

In the second half, DePaul lost it’s grip and Marquette began to go on an offensive surge. The Blue Demons started the half with a bucket on the first possession from Freeman-Liberty, giving them the lead 45-44.

On the next possession, Anei scores a hook shot layup in the paint to expand the lead to three. Freeman-Liberty hits the pull up three-point basket off the screen to maintain DePaul’s lead. However, Marquette went on a 12-2 run to regain the lead and never looked back. .

DePaul fought to stay in the game, but Marquette was too much for the Blue Demons. Marquette got whatever they wanted offensively. They hurt Depaul in the pick and roll and put on a shooting clinic. The Golden Eagles shot 57 percent from the field and 46 percent from the three-point line to end the game. Freeman-Liberty led the Blue Demons with 24 points. Aerie followed up with 16 points. Jones chipped in nine points overall.